The Irish potato variety accounts for a “significant proportion” of hectares under seed in countries like Egypt, Iraq, Morocco, Canary Islands, South Africa, Kenya and the UK.

IPM is a wholly owned subsidiary of Donegal Investment Group plc boasting a catalogue of 30 commercial proprietary potato varieties with seed production areas in multiple bases globally and commercially in over 40 countries.

In the 1970s, IPM joined a commercial partnership with the Teagasc Potato Breeding Programme, which has successfully developed over 40 potato varieties for both national and international markets, since 1962.

Rooster is the best known of the Teagasc varieties developed at its Oak Park, Co Carlow headquarters, due largely to its excellent taste and cooking quality.

“The original objective of the breeding programme was to breed a high-yielding, late blight resistant variety for the Irish market to replace the traditional varieties such as Kerr’s Pink and Record,” said Denis Griffin, Teagasc Researcher at the Crops Research Centre. 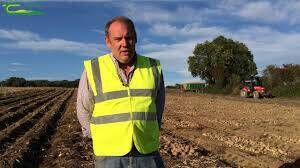 Denis Griffin, Teagasc Researcher at the Crops Research Centre says the original objective of the breeding programme was to breed a high-yielding, late blight resistant variety for the Irish market to replace the traditional varieties such as Kerr’s Pink and Record.

“The introduction of plant breeders’ rights in the 1970s increased demand for export varieties. and the aims of the programme quickly diversified.” The tie-up with IPM to exclusively market Teagasc varieties led to major growth in Ireland’s role in production of potatoes, the third most important food crop globally.

About 9,000ha of land is used to grow potatoes in Ireland every year.

“About 70% of that is Rooster, which is a Teagasc bred variety,” said Mr Griffin.

“Teagasc has also invested a huge amount of technology in the programme including DNA programmes that can track resistance at an early stage in the programme.” Of the over 40 varieties released since the potato breeding programme’s foundation, over 25 are still in commercial production today, with a further five undergoing market development.

“IPM, which is doing a lot of work in Africa now, markets all our varieties internationally, so for example in the UK, Cara was a hugely successful variety there,” Mr Griffin said.

“Kenya is the main base for our Java variety and that is being grown out there; so too is Buffalo.” “We also did some work in Ethiopia a few years ago and right now we have a Ph D student in Eritrea in northeast Africa, one of the poorest countries on earth, where the Electra variety is doing well.” “A lot of the old variety of potatoes that would have gone to Africa would have gone out with the missionaries in the 1920s and 30s,” said Mr Griffin.

“There is also a lot of breeding done by the International Potato Centre in Africa as well, because obviously, it is a much tougher environment there compared to here.

“A lot of seed potatoes internationally are sold out of Europe; so the breeding programmes tend to be based in Europe.

“This is because traditionally we have cooler climates for seed production and less virus transmission so it would be exported.680About 9,000ha of land is used to grow potatoes in Ireland every year, 70% of which is Rooster.

“But, in countries like Kenya, the people there want to try and produce Irish variety potatoes locally and that is why IPM has set up a business there.” “The company is being supported by the Department of Agriculture, Food and the Marine and by Irish Aid.” Speaking to the Irish Examiner, Colm McDonnell, IPM Potato Group said the Government in Kenya has “ambitious plans” to develop the potato business there.

He says the focus is on the potato being “an important part of diet, food security and the economy”.

And, IPM is playing an integral role in all of that.

“There is a huge problem in Kenya with poor access to quality seed potato; they need seed that comes through a certified programme that is free of diseases and pests,” he continued.

“We are participating in all of that and felt that it is something that we could assist with.

“There is an aspect of knowledge transfer as well as education to all of this.” He also pointed to sustainability in the food chain and the role of the potato in that, as the world gathers momentum in the effort to reduce carbon emissions.

“The potato crop is very much part of the sustainable ethos and will be part of the picture for a long time to come,” Mr McDonnell said.

“In order for us to grow our business, we have to think outside of the box; Ireland is a small country and Europe is relatively well-developed in terms of certain aspects of potato production and utilisation.

“And, in order for us to continue investing in research and development, we have to bring our varieties to different countries.

“Sustainability is the buzzword now, and we all have a responsibility to reduce our dependence on chemicals and on water.

“Water is becoming scarcer and more expensive to access for crops, and if we can develop potato varieties that can grow with less irrigation and less flood-irrigation, and become more efficient, that will help.

“We also need to develop varieties that can tolerate extreme weather conditions because of climate change.

“So, we are talking about robust varieties that are able to withstand numerous challenges.”

Food Heroes: we want to be the best

To store or sell your potatoes now ?

Potato news from all over the World in all available languages.