The federal government isn’t providing enough financial assistance to Pacific Northwest farmers, who are reeling from the impacts of recent extreme weather events. At least that’s what members of Congress from the Pacific Northwest and beyond wrote in a letter to the U.S. Department of Agriculture Monday, July 26, in which they requested expanded federal aid for the region’s agricultural community.

The Pacific Northwest’s farmers have been hit with a brutal one-two punch this summer — in late June, a record-breaking heat wave torched the region, followed by a statewide drought emergency. Berry farmers were particularly devastated by the heat wave, but the event left its fingerprints on the dairy, hops, shellfish, tree fruits, grain, wine grapes, poultry, beef and potato industries as well.

But the letter signed by 44 legislators argues that the agency should go one step further, also offering aid to farmers suffering from the heat wave’s impacts. The bipartisan push is being led by Rep. Suzan DelBene, a Washington state Democrat whose 1st District includes Whatcom County. The effort is supported by members of Congress from Washington, Oregon, Idaho, California, Montana, Colorado, North Dakota and Minnesota.

“Unfortunately, many of the producers who suffered the greatest heat-related losses were either located in counties not covered by the drought designations, experienced losses not covered by drought assistance programs, or both,” the letter reads, going on to request additional federal assistance beyond current USDA drought relief programs.

Full impacts not yet known

In Washington state, farmers expect millions of dollars in losses due to the heat wave. Raspberry, blueberry and blackberry farmers are reporting crop reductions of 20 to 80 percent, and cherry growers lost an estimated 20 percent. Dairy farmers are concerned about keeping milk yield high as their animals sweat out triple-digit days. Shellfish died en masse along the Salish Sea coastline, with early estimates predicting a death toll of a billion sea creatures.

Bruce Brenner, owner of J.J. Brenner Oyster Company in Federal Way, said that the heat wave coincided with particularly low tides, and almost all his clams in the top inch of sediment died. He predicts his company lost about $200,000 dollars in product.

“When I went out there, it stunk so bad. The moon snails died, the scavenger crabs were gone, all dead,” he said in an interview with The Bellingham Herald. “Not even the seagulls were around. I’ve never seen it in my lifetime or even heard of anything like this before.”

The financial damage to the state’s raspberry farmers sits somewhere in the ballpark of $10 million, Henry Bierlink, executive director of the Washington Red Raspberry Commission, said in an interview with The Herald. But the truth is that most growers don’t yet have a grasp on the heat’s complete financial toll — farmers are scrambling to account for product losses, some crops have yet to be harvested and some growers anticipate the heat wave will impact next year’s harvest as well.

The heat’s impact on potatoes, for example, is unknown, since the crop grows underground and will be harvested beginning in September. Research and history has shown, however, that high heat in the early summer can lead to reduced yield and deformed potatoes, said Washington State Potato Commission Executive Director Chris Voigt in a Herald telephone interview. A potato grown in temperatures consistently above 85 degrees Fahrenheit can turn out looking like a duck or chicken foot, he explained, which is unappealing to most consumers.

Plus, potatoes grown in high heat don’t make for very tasty french fries. “Starch content is lower,” he said. “That really doesn’t make a good french fry. They become limp. It’s not a nice fluffy french fry on inside.”

The heat wave’s fallout doesn’t end at the farm. The economic impact will make its way into grocery stores as well, growers say, and consumers can expect to see fresh produce and shellfish prices rise in the coming months.

Brenner, the shellfish grower, has already raised his oyster prices to help pay for the cost of removing dead shellfish from his harvest grounds. Bierlink of the Red Raspberry Commission said consumers have probably already noticed an increase in fresh raspberry prices, and Voigt said the same will likely happen for potato products.

It’s not just product quantity that was reduced, but product quality. Many produce growers will have to sell their crops at a lower “grade” or quality level than they would have, which fetches lower prices.

Potato farmers, for example, may have to dehydrate deformed product and use it to make instant mashed potatoes, Voigt said. One way he thinks the federal government could support potato farmers is by purchasing the surplus of instant mashed potatoes through the USDA’s Section 32 program, which allows the U.S. to purchase surplus product and distribute it to public institutions like food banks, schools and prisons.

Most farmers aren’t looking for a full reimbursement of lost profit, Bierlink said. They just want enough money to stay afloat financially until next summer, when they can hopefully start fresh and financially recover.

“We aren’t going to get that kind of money, and we aren’t looking for that,” he said. “We are just looking to bridge losses for those severely impacted and give them a chance to make it to next year.”

The more complicated question is how the region’s growers will grapple with the long-term financial impact of extreme weather. Climate change worsens both heat waves and drought, and if this year was any indication, that’s no small issue for the business of agriculture.

Growers are not ignorant about this looming, hotter reality, and many are taking actions to prepare for more tough summers like this one.

Brenner, the shellfish grower, is looking to invest in a saltwater holding system to keep shellfish cool from May through September. However, it’s not easy to find a local manufacturer, and he’s currently looking at a system that needs to be transported from Spain. At the end of the day, the endeavor will cost an estimated $125,000.

Bierlink said that the Red Raspberry Commission considers future climate conditions in all the research it funds. Raspberry growers in the area are beginning to consider different varieties that are more drought resistant, he said. Varieties with more canopy cover, or leaves shading the fruit, fared better in the heat wave.

Some blueberry farmers in western Washington are considering overhead misting systems, which are more commonplace in the hotter eastern Washington climate, said Alan Schreiber, executive director of the Washington Blueberry Commission. But installing these systems raises other concerns: What if the added moisture increases crop disease in western Washington, where it’s already wetter? Where will farmers get the money to install systems like this? And can growers even secure the water needed to run the machines in an area where water rights are already contentious?

“Right now growers are just trying to get through harvest. Sometimes they can’t think about next year or the next 10 years,” Schreiber said in a telephone interview with The Herald. “But in the back of their mind, growers have to be thinking ‘What if this happens again?’” 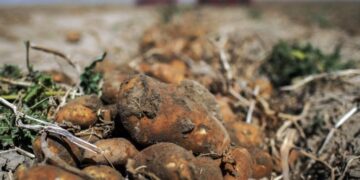 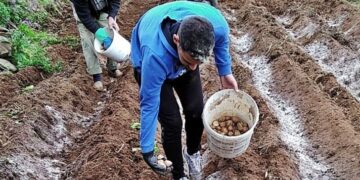 Five million kilos of unsold potatoes in the Canary Islands 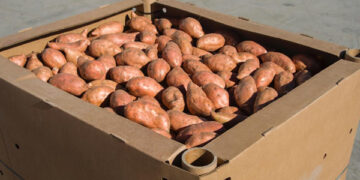 “Year-round sweet potatoes from the US, until new crop harvested” 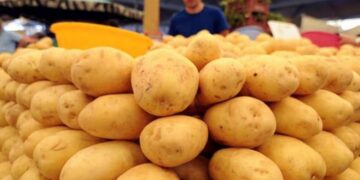 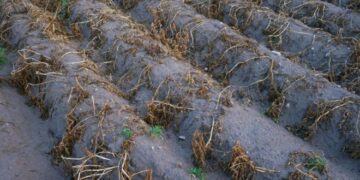