Can You spot the differences between potato viruses and leaf symptoms? 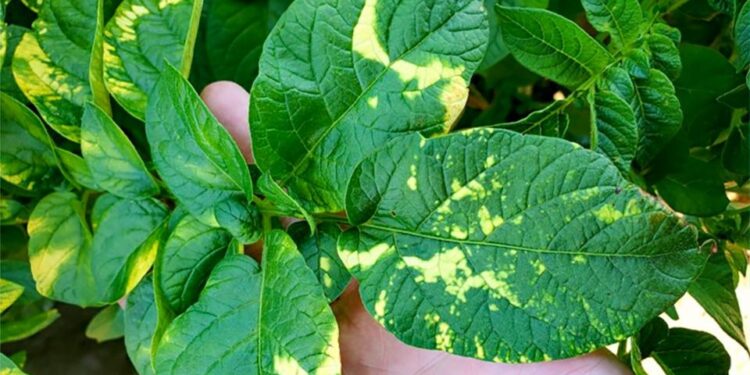 Potato viral diseases can be difficult to identify from leaf symptoms alone. The symptoms can vary depending on the virus strain (or strains), cultivar, age of the plant when it was infected, or growing conditions.

Viruses often produce symptoms that can be confused with those caused by other viruses or pathogens, or herbicides. And some viruses produce mild symptoms that are easily overlooked.

Potato virus Y (PVY) symptoms vary depending on the cultivar. A typical symptom of PVY involves a yellow or light-green mottling of leaf tissues — also known as mosaic (right image: PVYO in a proprietary Frito Lay cultivar). But some cultivars have a hypersensitive reaction to PVY that results in dark-brown necrotic streaks on the leaves and stems that usually progresses to leaf drop (shown above: ‘Canela Russet’).

Few growers associate these symptoms with PVY. Some cultivars (like ‘Dark Red Norland’, ‘Pike’, ‘Ranger Russet,’ and ‘Yukon Gold’) can have a hypersensitive response to certain strains of PVY.

Seed potatoes are now screened for PVY. Many of the seed certification agencies, which traditionally rated seed lots for virusese based on visual inspections, have added PVY testing. The impact on potato seed growers has been significant, since infected seed lots are downgraded or rejected if they have PVY levels that exceed established tolerances. Seed growers are now challenged to manage a problem tht can’t always be seen.

PVY is causing secondary, more serious problems. Another reason for increased concern is that some of the new strains can cause potato tuber necrotic ringspot disease (PTNRD). PTNRD creates sunken or necrotic rings on the tuber surface that can extend into the flesh.

The Strain Impacts Leaf Symptoms, Too

PVY symptoms also vary depending on the virus strain. Above, two different PVY strains infect the same cultivar, ‘Alturas Russet.’ While both show mosaic symptoms, PVYN-Wi (left) severely stunts the leaves and the leaflets are rugose (wrinkled). PVYNTN infects the plant on the right.

Potato mop-top virus (PMTV) can cause leaf symptoms, but only when the disease originates from an infected potato seed piece. Even then, foliar symptoms are rare, and expression varies depending on the cultivar and weather. Symptoms are more common when temperatures are cool. Leaf symptoms include yellow spots and blotches, that are often in a V-shaped or chevron pattern, as shown in the photo.

Alfalfa mosaic viruses (AMV) symptoms can look like PMTV. This virus can also produce yellow spots and blotches on potato leaves. The disease is also called ‘calico.’ The symptoms we see in potatoes are the result of current season spread. AMV is transmitted by aphids that carry the virus to potatoes from nearby alfalfa or clover fields. Infection is limited to a few plants near the field edge, and unlike PMTV, AMV is considered a very minor concern.

Some people have a knack for spotting virus-affected plants and correctly diagnosing the cause. Many of them work for potato seed certification programs or diagnostic labs and have a well-trained eye for these problems.

But not everyone can be an expert. When in doubt, you can submit samples to a plant diagnostic laboratory.

Or you could try a rapid diagnostic test kit. Several companies sell them, including Agdia, Inc., Bioreba AG, and Pocket Diagnostic. There are tests available for PVY, AMV, Potato leafroll virus (PLRV), and several of the other ‘alphabet’ viruses: PVA, PVM, PVS, and PVX. 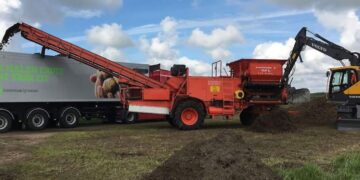 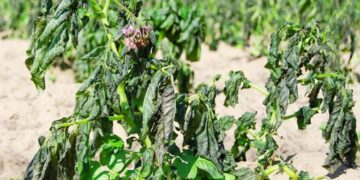 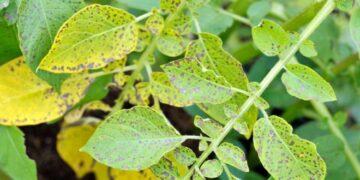 Another New Hope in Fighting a Devastating Pathogen for Potatoes 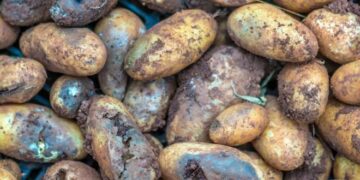 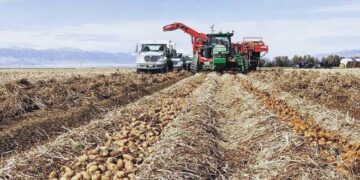