in News, SCIENCE AND EDUCATION
Reading Time: 3 mins read
A A 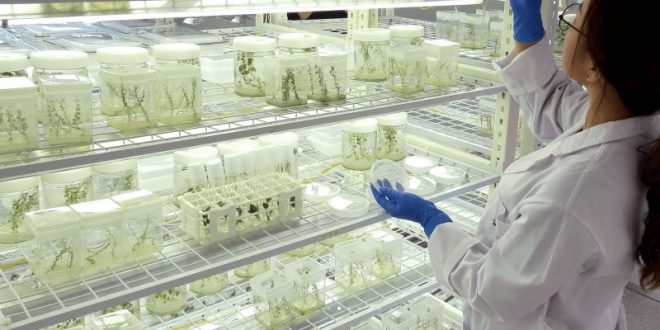 Throughout a special award ceremony held recently, a professional jury conferred the PotatoEurope Gold Innovation Award to the Microtubers of E Green Global (EGG), albeit the cancellation of the international potato trade exhibition.

The jury’s decision has been based on criteria such as originality, potential impact in the potato market, and applicability in the potato sector.

The award was presented during a small gathering at the location of Wageningen University & Research (WUR), Field crops in Lelystad, The Netherlands.

Over 30 participants recognized the PotatoEurope Innovation Award as the perfect opportunity to put their innovations for the potato industry in the spotlight. Out of this large number of applications, the expert jury initially selected a top three innovations. Eventually, the Silver Innovation Award was awarded to Crop.zone’s Nucrop, while HZPC’s Smart Bigbag received the Bronze Innovation Award.

“We expect that winning this prestigious award will give a boost to the introduction of our patented system in Europe”, said Epi Postma, director, EGG Business Development Europe.

When handing out the prize, jury member Dirk Duijzer, a figurehead of the Dutch Top Sector Agri & Food, mentioned that he expects the industry will recognize EGG Microtubers as a fundamental but also applicable breakthrough.

“This is a very special innovation that means a lot in different domains, from health and speed to broad applicability. We see the EGG Microtubers as a leap forward towards the innovation of varieties and believe that the innovation will soon be widely applicable,” told Dirk Duijzer.

The South Korean company EGG has developed a technology to produce virus-free and vigorous microtuber seed potatoes through mass production in bio-secured plant factories. EGG Microtubers are harvested every day, throughout the entire year and can be machine planted directly in the open field.

“A Real Game-changer in Potato Desiccation!”

After the general public was invited via various platforms to vote for the public’s favorite, an online battle between the top three participants commenced. On September 1, it was announced that the voters from all over the world decided Crop.zone’s Nucrop deserves the Audience Award.

“The general public awarding our innovation with the Audience Award indicates that alternative methods of haulm killing are an important issue in the potato supply chain,” said Dirk Vandenhirtz, Founder & CEO of Crop.zone.

Over 200 votes were cast online, and using the voting form, the potato professionals casting their vote could also indicate why they chose a specific innovation.

“Amazingly interesting innovations, practically all meaningful and completely different in focus: speed of reproduction, strengthening freshness and quality of the final product, less use of harmful substances, better tracking and tracing, less disease susceptibility, optimization of the producer’s income, and so on. Many specialists are involved in these innovations: electronics, mechanical technology, digital technology, marketing, DNA technology, and logistics, all highly specialized. This broad range of different directions and specializations shows that entrepreneurs in the potato chain have to work on the cutting edge to stay competitive”, Dirk Duijzer concluded.