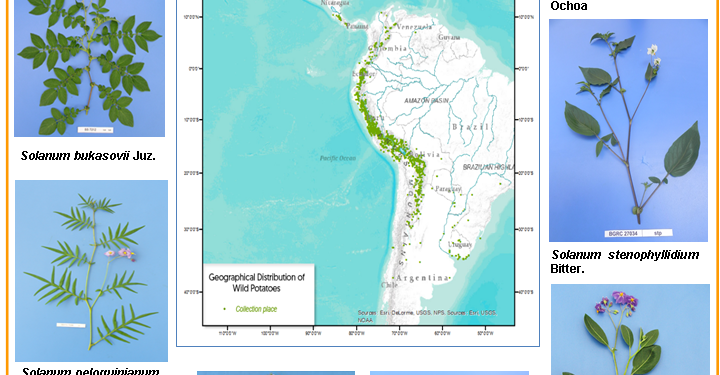 Potato is an essential crop for food, culture and the economies of Andean countries and the world. Although there is little documentation of the exact route of introduction of potatoes to Europe, it is believed that potatoes were first introduced in the region of Seville, Spain, as there are hospital records showing acquisition of potatoes in 1573 (Hawkes 1990). It is assumed that from the introduction in Spain, potatoes were transported by different routes and subsequently adapted to other continents (Africa, Asia, and Australia) as a staple crop.

The cultivated potato is native to South America, and its centers of origin and diversity are located in the Andes mountain. The Collao plateau, the watershed basin of Titicaca Lake, with the corresponding territories of Peru and Bolivia are believed to be potato’s primary center of origin and diversity. Other secondary centers of diversity are southern Bolivia, northern Argentina, Pasco’s Knot Peru, Loja’s knot, Ecuador and Peru; volcanic complex of Chimborazo, Tungurahua, Cotopaxi in Ecuador and the nude asture in Colombia. These geographic areas were involved in the interaction of potato cultivation with early human cultures, a reliance that extends to the present day in many Andean indigenous communities . The geographical range of wild potato species is highly varied. North America: Mexico (MEX), United States (USA); Central America: Costa Rica (CTR), Guatemala(GUA), Honduras (HON), Panama (PAN); and South America: Argentina (ARG), Bolivia (BOL), Brazil (BRA), Chile (CHL), Colombia(COL), Ecuador(ECU), Paraguay(PAR), Peru (PER), Uruguay (URY) and Venezuela (VEN). These 16 countries all have native wild potato species. Many investigators (Bukasov, Hawkes, Vargas, Ochoa, Spooner, Salas) have used a variety of methods which indicated that the ancestor of the cultivated potato are the Andean wild species which are widely distributed throughout the Andes. The long-term conservation of these species is done with botanical seed which involves the collection, processing, regeneration, conservation and distribution of seed.

With the digital platform, DLG is offering the first international agricultural platform in the virtual world. The new business platform specifically combines the live experience of a trade

With the digital platform, DLG is offering the first international agricultural platform in the virtual world. The new business platform specifically combines the live experience of a trade fair with innovative digital information and networking.

From November 2021, you can use AGRITECHNICA digital for your product news, online events, and visitor engagements – smart and targeted.

The Potato Expo, the largest conference and trade show for the potato industry, has always been the place where growers, suppliers, and industry experts come together to connect, grow and share ideas.

At this year’s show, there will be a lot to catch up on:

LAMMA show held at the NEC is the UK’s leading agricultural machinery, equipment and technology show attracting over 40,000 visitors. LAMMA, which continues to offer

LAMMA show held at the NEC is the UK’s leading agricultural machinery, equipment and technology show attracting over 40,000 visitors.

LAMMA, which continues to offer free entry and car parking, will build on the event’s reputation as the most diverse and innovative machinery, equipment and services show, covering all sectors of the farming industry under one roof.

With 11 halls packed with new ideas and cutting-edge equipment – the event will provide a key platform for exhibitors to introduce ground-breaking innovations to the market.

The event will stay true to its roots, attracting not just the large companies but also hosting smaller agricultural engineering and machinery companies from across the UK, ensuring a fantastic array of products to suit all sectors of the industry, whatever your budget.

The University of Idaho Extension presents the 54th Annual Idaho Potato Conference and 38th Ag Expo to be held on January 18 – 20, 2022 in the Pond

The University of Idaho Extension presents the 54th Annual Idaho Potato Conference and 38th Ag Expo to be held on January 18 – 20, 2022 in the Pond Student Union Building of the Idaho State University.

The conference covers a wide range of industry topics ranging from variety development, management practices and economics, marketing and political issues. There are Idaho and Washington Department of Agriculture Pesticide Handler credits available.

There is also a series of nine presentations on industry topics presented in Spanish. The Ag Show is held in Holt Arena and there is an extensive Trade Show in the ballroom of the SUB. There is also a Grower-Speaker Social Wednesday evening, poolside at the Red Lion Inn.

This annual conference is held by the University of Idaho in cooperation with the Idaho Potato Commission Idaho Growers-Shippers Association, Idaho State University Association of Commerce and Industry, Spectra Productions Trade Fair Exhibitors, and the Idaho Center for Potato Research and Education Raw Products Committee of Idaho.

Well-curated concurrent seminar topics with a focus on current and future trends of the industry addressed by eminent speakers.

Decision-makers and technical personnel from snack, bakery, and confectionery manufacturers from India and neighboring countries expected to visit this trade fair.

Inter FoodTech is a brand new trade fair backed by a team with over 15 years of experience in organizing B2B trade fairs in the food and food processing & packaging industry.

Conceptualized to offer something for everyone associated with the food processing industry, Inter FoodTech with its well-curated supporting programs and interactive experiences create ideal opportunities for industry members to interact with existing and new connections.