in Company
Reading Time: 3 mins read
A A 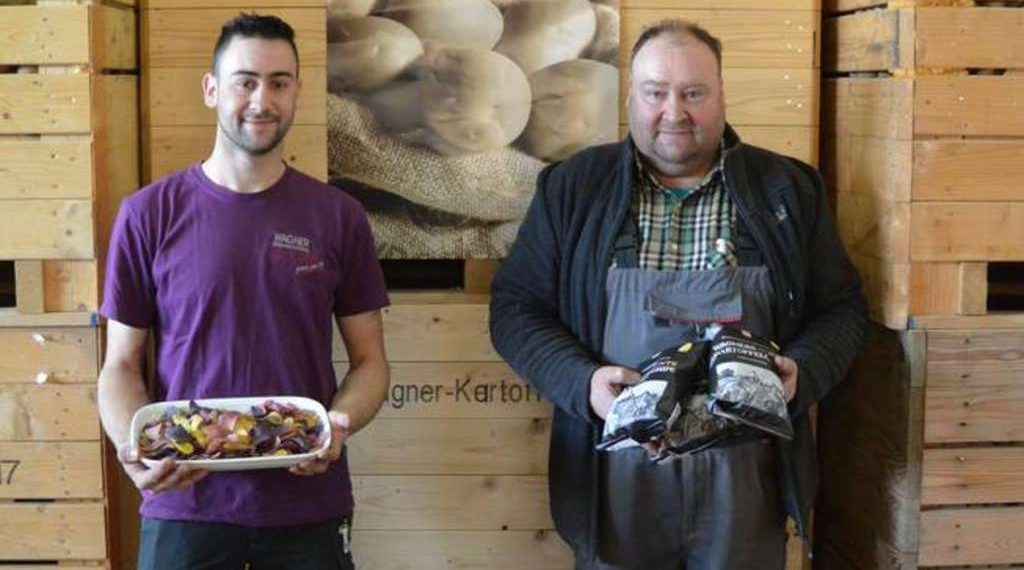 The saying “necessity makes you inventive” applies to this story like no other: in the spring of 2020, Anton Wagner will only be able to sell part of his stored potato harvest. Because the gastronomy has closed, there are no more customers for the particularly expensive, colorful potato varieties, which cost three euros per kilogram. He has to write off 35 tons, feed it to fattening cattle or dump it into the biogas plant.

There is an older idea: to market the potatoes as chips. In Bielefeld, Wagner discovers a contractor who fries vegetable chips on behalf of and is ready to produce the “colorful potato chips” for the Ellwanger potato farmer from the colorful potatoes.

The daughter Antonia, who studies at the University of Art and Design, designs a packaging that clearly stands out from other chip bags. Black foil and a black and white picture showing the father and brother with fork and hoe should make it clear that this is a special product, where regionality and the unadulterated potato taste are in the foreground.

That is why Wagner also opts for the gentle frying process in a vacuum with sunflower oil and seasoning exclusively with sea salt.

In February 2021, the first cargo of colorful potatoes, three tons, will be transported to Bielefeld, which will result in 6500 packs of chips weighing 90 grams on 12 pallets.

The “colorful potato chips” by Wagner are sold at the weekly market and in the shops that already sell the potatoes of the farmer from Neunheim. That’s 20 points of sale. After four weeks, almost the whole batch of potato chips is gone.

“Some people tried it once and then bought it on a cardboard basis,” reports Anton Wagner. He also observes that the chips bring completely new customers to the market stall: “Young people who have seen our chips on Facebook and they are now also taking our potatoes with them.”

The second load of colorful potatoes is on its way to Bielefeld. There will be another 8000 bags of chips coming back. If they sell just as fast, it’s over for now. The new potatoes are harvested only in June and July.

We will increase the cultivation of our variegated varieties fivefold this year.

Anton Wagner Potato farmer
“We will increase the cultivation of our colorful varieties fivefold this year,” Wagner has decided due to the success with the potato chips.

Because the potato growers have less planting material on offer, it was not so easy to get the varieties. Son Maximilian had to drive to Erding so that the first tubers could be planted the next week.

The bottom line is that the Wagner family business can only partially absorb the financial loss caused by the discontinuation of gastronomy through the chips.

Anton Wagner: “We have delivered 50 to 60 tons less potatoes than before Corona. In addition, there are fixed costs for chip production, for example for the production and printing of the bags.”

Nevertheless, he is happy about the success with the new product and can imagine expanding this segment and also offering other types of potato chips.

When growing, he will put the variegated potatoes at a greater distance, so that the tubers grow larger. For the chips, larger tubers are convenient, while the smaller ones are more in demand at the weekly market.

More about the Wagner company at www.wagner-kartoffeln.de

McCain Foods will launch new Regen Fries in the Metaverse as part of the #SaveOurSoil campaign. The potatoes used to...