in Company history, Europe
Reading Time: 9 mins read
A A 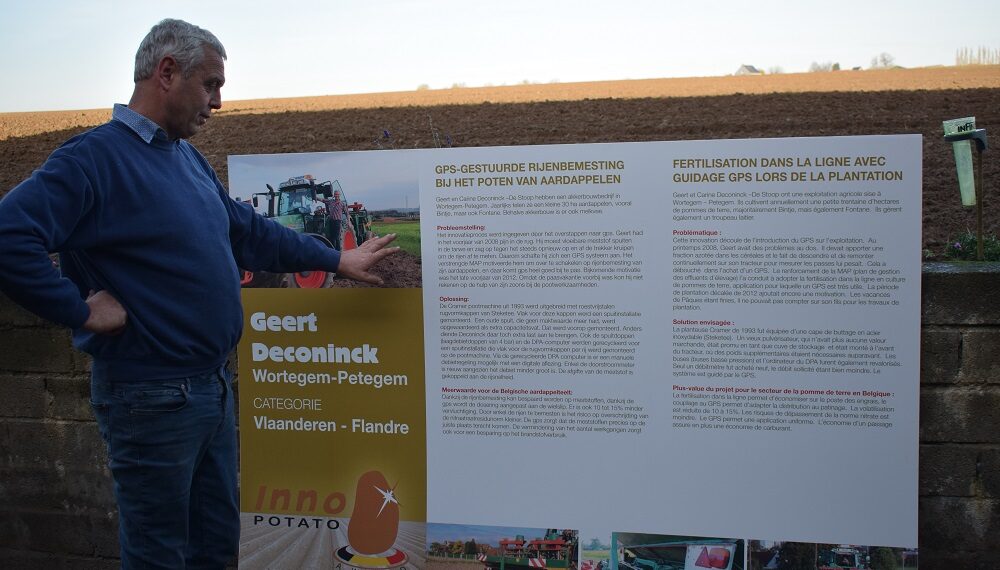 Akkerbouwkrant was warmly received in mid-November at the arable farm of Geert Deconinck and Carine De Stoop. While the conversation was initially about the disadvantages of today’s automated, digitized and numbers-driven society, it soon became apparent how progressive they have been in the business for years. Themes that are hot today were already on the agenda at Deconinck years ago. A fascinating conversation at the kitchen table in the Flemish town of Wortegem-Petegem about precision agriculture, soil pressure and road safety.

According to Geert Deconinck, digitization brings a lot of ease of use. “It makes things more efficient but not always more practical. When something goes outside the planned schedule, users often stand still. An older farmer like me can continue to work mechanically, but younger generations do not have that experience.” According to wife Carine De Stoop, the evolution is going very fast, but the agricultural practice remains practical.

“For example, you cannot plan that the weather will be good on a predetermined date. We are not date farmers.” Deconinck adds: ”Due to the wet weather, our onions were not gone on September 30, the date the catch crop had to be sown. So I sowed after all, while the onions were gone two days later.”

GPS determines whether you are a good customer

The recent evolution from a mixed farm to pure arable farming is still a burden on the stomach. “We stopped using our dairy cows two years ago,” says Carine. “We had 40 cows and we were told that the milk collection would take 13 minutes when it should only be seven. The time required for loading is plotted against the number of litres. There we were among the worst customers. On the one hand because we only had forty cows, on the other hand because we are far from the public road and the GPS signal on which the measurements are based does not measure on private property.

So we had the choice to supply more volume or to relocate our barn. But even if we doubled down, we’d still be a small customer and there was no guarantee we wouldn’t get another ultimatum the following year. This is an example where the GPS determines whether you are a good or bad customer. We then decided to stop because we did not want to participate in the bidding of big, bigger, biggest.”

Today they farm 85 hectares, almost all leased from parents and neighbours. Beets, potatoes, carrots, onions, grains and flax are grown. Hay is harvested from the pastures they cannot plow and they are sold. But even after the dairy cows have stopped, Geert and Carine don’t feel free. “You are being sent from above. For example, the manure bank comes to take samples to determine your residues and if these are not good, you will be fined. But sometimes you really can’t control nature. If you receive advice in the spring, follow it closely and still have bad values ​​noted in the fall, what else can you do?

There are so many elements that the farmer has no influence on. We sprinkle according to the standards, but you still have to wait for the results and then you sometimes get a hard verdict. While you do fill in your fertilizer register perfectly. And we certainly don’t sprinkle too much because it costs more than enough. We just try to deliver something beautiful.”

The best proof of this is that they have been working on precision farming for almost fifteen years. The first GPS was introduced in 2007 and Deconinck soon organized a precision agriculture demo in 2009. “Every year we expanded the applications. It started with driving straight. The second application was spraying on GPS, followed by sowing and planting with section control. Every year we are still trying something new when it comes to precision farming. For example, this year we sowed wheat with task cards. We sowed more densely on the heavier soil and less densely on the lighter soil.”

Son Thibaut makes the task cards via taskkaart.be. “We can then read it into our Tellus Pro via the Kverneland Farmcentre,” he says. “Because my brother Louis did an internship at Mechatronics, the company responsible for the development and production of electronic applications for agricultural machines and tractors within the Kverneland Group, Kverneland supports us somewhat in working with task cards.

Another drawback is that we have three different GPS systems and we only use one of them for working with task maps because the data is not interchangeable. There are eleven producers and they have all built their file differently so that you cannot exchange them. We also scanned our soil with a Veriscan.

Geert continues: “The next step is that we will try to fertilize a plot one hundred percent as the Veriscan has shown. I think it is very important to try such things, but you should then be able to obtain an exemption for that plot so that there is no sanction if it appears after checking that the test did not yield the desired result. Now it is very demotivating to want to be innovative and to be paid afterwards if something turns out not to work. That’s exactly why you experiment.”

Low pressure tires a must for precision farming

Another hobbyhorse of Deconinck is ground pressure and tire pressure. “We bought our first tractor with a tire pressure system in 2007. Today we drive with low pressure tires and we have three tractors equipped with a pressure exchange system. I dare to drive very confidently with low pressure. You can clearly see a difference when we arrive on the field with tires still inflated. If we deflate our tires, we will obviously leave with less rut.

We can also determine the percentage of wheel slip on the basis of the GPS signal and the driving speed of the tractor. This is significantly less due to the use of low-pressure tires and the pressure exchange system. We see this by checking the claw print on the ground. The better a claw still stands on the ground, the less wheel slip you had. I also constantly try to keep myself informed and educate myself.”

“I also pay a lot of attention to the legislation. For example, true low pressure tires on trailers have no speed capability and are quite expensive. If I also take into account how much time the trailer spends on the field and how much on the road, I know enough. In addition, harvesters are very large and have large bunkers. Why would I still go out on land with my tipper? I park on the public road, the machine loads the tipper from the field and I don’t make the road dirty. Tractors often spend several hours on the field, for example when plowing, so a pressure exchange system is certainly an added value.”

Another reasoned choice is for wider implements. Deconinck prefers to use tools with a working width of five meters instead of three. “Now, for many farmers, the tractors are too heavy for the machines they have. In the past, a farmer had 80 horsepower for three-meter implements. If it was good, he sowed; if it was not right, he did not sow. That was good practice. Now they have 150 to 200 hp, often still with the same three-meter machine, and they also sow at bad times. But that does nothing in my opinion.”

“I myself have 180 hp and go to a working width of five meters. I calculate about 30 horsepower per meter. More is wasted because the tractor works well in good conditions. And in bad conditions I don’t go out on land. The idea is to limit erosion. But now contractors do harvest on a fixed date with gigantic wheels that sink very deeply. The contractor is gone and the farmer is left with damaged land for years to come.

In my opinion, the material becomes too heavy for the soil. I like to look for something new but dare to implement it on older material. For example, I sow wheat on GPS with a tractor with twenty thousand hours on the counter. It is a 125 hp and 5,500 kg tractor. We also have one of 180 horsepower that weighs 8,500 kilograms. They are both on low pressure tires but there is a difference of three thousand kilograms.

“What I do have a hard time with is that I bought new low pressure tires in the spring that have only come in now. This does not motivate me to go to fairs because if you were to buy something, it would be before 2023. In addition, there are the corona measures. However, I am not against scholarships. In 2012, we even won an award at Interpom for innovative potato cultivation. When I bought a new jet, I kept the old one and mounted the barrel on the front of the tractor. I also worked with GPS. For example, I could plant potatoes on small ridges, then came the spray nozzles, then the ridging hood and then back pullers. It brought us 1000 euros.”

A final important aspect for Deconinck is road safety. “Machines and tractors on farm don’t have to be new, but they have to be compliant. Lights, brakes and bicycle catchers must be in order. I provide driving training for a tractor on a self-employed basis. I try to teach young drivers from the start that they have to be in the rule. I have fitted LED lighting on all my machines, including the plow. This way I am always at ease because an LED lamp always works. I also have two Agribumpers, purely for safety. And I also attach great importance to shielding the load via the automatic tarpaulin on our three-axle vehicle.

On the one hand to ensure that you do not lose any cargo, but also to protect yourself. Even in wet and dirty weather you have to put that tarp over your load and you will not do that if it is not automatic. Moreover, the risk that you will fall off your cart with a manual sail is not imaginary. In my opinion, it is a small price to drive around well-maintained and in compliance. Our three sons, Thibaut, Louis and Guillaume have a say in the purchase of new equipment, but I will first ask what his GVW is. I want to make sure the tractor can carry enough. Then they can make the choice.”

This article is from the Akkerbouwkrant

Improvement in the water level of the reservoirs Spanish

Plans have been unveiled for a new International Potato Innovation Centre (IPIC) in Scotland. As Ewan Pate reports for Farmers Guardian, it will...

The new normal? How Europe is being hit by a climate-driven drought crisis

Europe’s most severe drought in decades is hitting homes, factories, farmers and freight across the continent, as experts warn drier...

Retail sales and home consumption have plateaued again in Ireland due to soaring temperatures and peak holidays period, according to...

Improvement in the water level of the reservoirs Spanish