in Asia, Regions
Reading Time: 4 mins read
A A 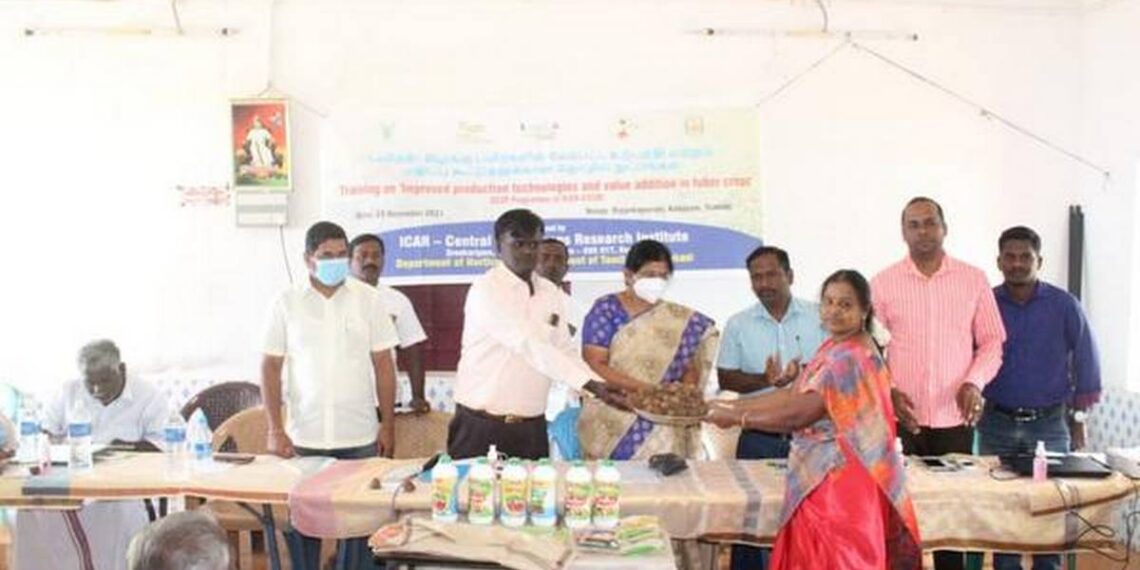 The Indian Council for Agricultural Research’s Central Tuber Crop Research Institute (CTCRI) in Thiruvananthapuram has established frontline demonstration-cum-seed villages for high-yielding Chinese potato at Kuthapanjan and Rajangapuram in Tenkasi district as this district has been a major producer of the crop for the past several decades.

Besides providing seeds to the farmers opting for cultivation of high-yielding and disease-resistant Chinese potato variety ‘Sree Dhara’, these two villages will also have demonstration fields, which agriculturists can visit to understand the cultivation and crop management practices.

Chinese potato, a delicious tuber crop that sell like hotcakes during the months of January and February in the markets here and also in Kerala, is being cultivated on a large scale by the farmers of Tenkasi district. Hence, the CTCRI recently trained the farmers of the district in growing its ‘Sree Dhara’ variety that gives yield up to 25 tonnes per hectare. The Department of Horticulture coordinated the training activities.

“The prime objective of the introduction of our high-yielding and pest and disease-resistant tuber crop to the traditional Chinese potato growers is to enhance their income through newer technologies. As this crop has a high shelf-life besides giving excellent yield, the farmers actively participated in the hands-on training sessions. Buoyed by the response, we have transformed Kuthapanjan and Rajangapuram villages into ‘seed villages’ for this region to ensure uninterrupted supply of seeds to the agriculturists,” said R. Muthuraj, Principal Scientist, CTCRI, Thiruvananthapuram.

Apart from cultivating ‘Sree Dhara’ variety of Chinese potato, the scientists also trained 115 growers in cultivating cassava, elephant foot yam and taro and taught them the value-addition techniques of these crops for getting enhanced income.

“As we have trained them in preparing snacks, pasta, noodles, etc. from cassava, the farmers, who want to start their value-addition units with the raw material being grown by them, can get attractive income,” said T. Krishnakumar, Scientist, CTCRI.

Farmers cultivating tuber crops in the district were trained by a team of scientists from Indian Council of Agricultural Research’s Central Tuber Crops Research Institute (CTCRI), Thiruvananthapuram, in augmenting their income by cultivating high-yielding varieties and value-addition of tuber crops. The CTCRI, in association with the Department of Horticulture, organised the training programme for farmers on ‘Improved production technologies and value addition in tuber crops’ at Mekkarai near Shenkottai on Tuesday.

Experts from the CTCRI trained 120 farmers in augmenting their income by cultivating high-yielding varieties of tubers such as cassava, elephant foot yam, taro and Chinese potato and adopting new technologies.

Dr. Muthuraj trained the farmers in cultivating improved varieties and adopting newer technologies and distributed ‘tapioca special’, a micronutrient formulation, for managing micronutrient deficiencies in tapioca. Value-added products such as snack, pasta, noodles etc., all prepared from cassava-based composite flour – were also explained to the farmers during the training session of Dr. Krishnakumar.

Jeyabharathi Malathi, Deputy Director of Horticulture, Tenkasi, who inaugurated the training programme, distributed ‘Sree Reksha’, a high-yielding cassava mosaic disease-resistant variety. Since farmers cultivating this variety with the high starch content of 28% and higher shelf life have harvested up to 45 tonnes per hectare, the variety has become the most-sought after variety.

Subsequently, the ICAR – CTCRI has established frontline demonstration-cum- seed villages on cassava and Chinese potato at various locations, including Mekkarai, Kanakapillaivalasai, Kuthapanjan and Rajangapuram of Tenkasi district. The demand for planting materials of these crops is met by established seed villages in these locations.

Mite infestation: NZ growers urged to be vigilant and report

Variable precipitation had an impact on this year’s potato crop in southwestern Ontario province in Canada, especially if the operator...

A growing number of residents of Yanggang Province – North Korea’s chief potato-growing region – are roaming around cities to...

It’s “very likely” Australia will face a potato shortage in coming months, the vice-president of horticulture at the Victorian Farmers’...