in Company history, Market
Reading Time: 9 mins read
A A 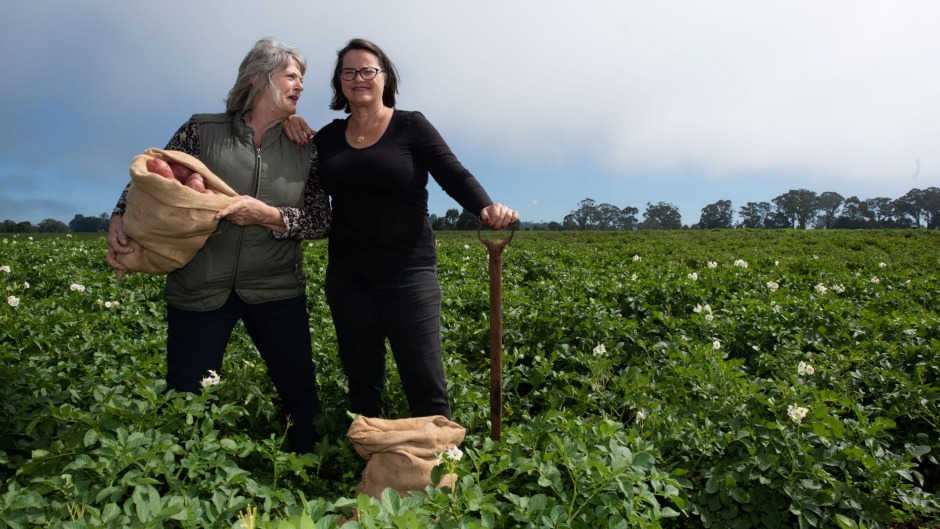 “The Spud Sisters will come with a selection of potatoes and we will test them in the kitchen … the quality of their product is exceptional.”

Kerri Farrell grew up with rich chocolate brown soil under her fingernails – the volcanic earth of western Victoria. The daughter of a Ballarat potato grower, Farrell grew up pulling potatoes on the family farm near Mount Pleasant. When she moved to Melbourne and started a family, her grandfather dropped by with a truckload of potatoes.

“He told me to try selling them to the mums at kindergarten,” says Farrell. “So, I put my baby in the pram with bags of potatoes underneath and started selling them door to door.” That was 32 years ago. Today Farrell supplies more than 60 city and regional restaurants plus an online home delivery service. She works with her sister, Catherine Ramage, and their siblings, gathering a range of about 20 different potato varieties from farms in Victoria, Tasmania and NSW.

Together they are known as the Spud Sisters and have an encyclopaedic knowledge of where potatoes are grown, what they taste like and how they cook. “Some potatoes contain more starch, some have less starch and more water,” says Farrell. “Then there are the potatoes that turn brown and blacken when deep fried because they have more sugar.”

The Spud Sisters’ clients include chefs such as Ben Shewry from Ripponlea’s three-hatted Attica restaurant.

“If we serve a French fry at Attica it has to be next level,” says Shewry, referring to the crisp, golden straws served with his Australian take on steak frites, “roo frites”. “The characteristics of potatoes change throughout the season so to have a consistent dish, we need to change the variety of potato,” he says. “The Spud Sisters will come with a selection of potatoes and we will test them in the kitchen … the quality of their product is exceptional.” Presently Shewry is using a potato variety called Innovator.

For potato growers such as John Dunn, the Spud Sisters have been “the missing link” between farmer and chef. “Each potato variety has characteristics, even how you grow them can change the way they taste and cook,” says Dunn, whose family has been farming at North Blackwood near Trentham since 1865. “Explaining that can be hard but the Spud Sisters come and listen to us [farmers] and are able to pass on that information.” The biggest challenge for Farrell and Ramage is keeping up to date with new potato varieties.

“Gone are the days of the washed or brushed spuds,” says Farrell. “There are seed companies scouring South America looking for ancient potato varieties that will grow in Australian conditions.” In the past year, varieties sourced from farms and markets in the Andes have hit the local market with names such as Mayan Twilight, Peruvian Gold, Crimson Pearl and Cranberry Red. “Our job is to test them, cook them and see how they perform in the kitchen,” says Farrell. “There are about 3000 different potato varieties in South America, and in Australia we use just a handful.”

Floury potatoes, such as Maris Piper, will give you floury mashed potato, but if you like creamy mashed potatoes try a waxy variety such as Dutch Cream, suggests Kerri Farrell.

“If you’re adding potatoes to a stew to break down and thicken the sauce you need a floury potato with lots of starch. “But if you’re making minestrone, you want a waxy potato that won’t break down. Do yourself a favour and head to the farmers market or greengrocer to get appropriate varieties for the different dishes you are cooking.”

The Spud Sisters potatoes are available at selected farmers markets and online spudsisters.com.au

Fertilizer supplies are at about 50%, time to employ the 4Rs

Manitoba, Canada Producer organisation Peak of the Market Ltd. is announcing a new direction for the future. With the recent...