Solynta scales up with hybrid potato. 25 grams of seed for 80 tons potatoes.

in Seeds
Reading Time: 7 mins read
A A 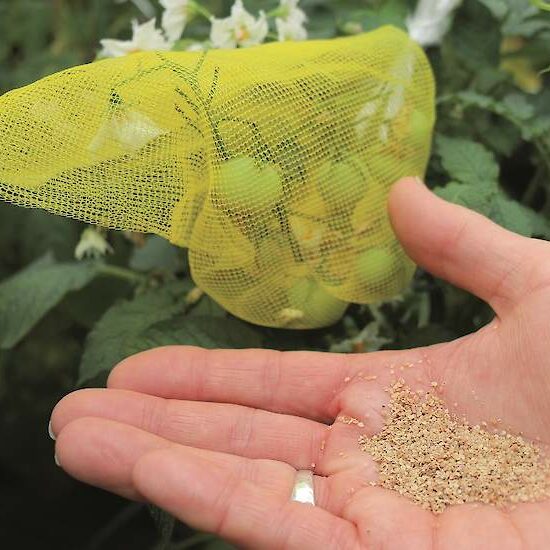 Harvesting 80 tons of potatoes with 25 grams of seed per hectare? That’s certainly where it’s going, according to Solynta’s R&D director Edwin van der Vossen. Now that the technology behind the hybrid potato is on its feet, the company is looking for cooperation with Avebe. How far is it exactly with the hybrid potato?

In a greenhouse somewhere in the middle of the Netherlands, An employee of Solynta walks with his laptop past tables on which there are pots with potato plants. They are all potentially new parent lines for hybrid earth apple varieties. He gently taps the plants, takes a close look at the inflorescence and then notes a score for retention, i.e.: how well the plant holds its flowers and berries. “That is an important characteristic for us, because we are a seed company,” explains Edwin van der Vossen. “Our parent lines need to be able to make a lot of seed.”

We are at one of the breeding sites.

Last year, Solynta registered her first varieties for the variety list. This means that these hybrid potatoes will compete with the current varieties on the market in terms of performance. An important moment, all the more so because due to unforeseen technical bumps, the introduction of a commercial breed nevertheless took a few years longer than Solynta initially hoped. These problems have been tackled in-depth, according to the research director. So far, Solynta has been working on a table earth Apple. Why a table breed? “The table market is a big market, which is why we have built our platform with it. We now have material that grows well. From there, we can start growing potatoes for other purposes, with the specific properties required for this,” explains Van der Vossen.

An important step is the previous month

The next few years are used to cross the necessary traits into new parent lines. “On the one hand, this means a whole range of cultivation properties that play a role in the north-east of the Netherlands and North-West Germany, such as resistance to a whole range of nematodes, late blight and wart disease. In addition, we will focus on the ingredients. In addition to starch and protein, there may be other components. So we are not only focusing on a potato with a high starch yield, but also a potato that is more broadly focused on the ingredients market.”

From 2027, Van der Vossen expects the breeding programme to yield the first commercial varieties. “Then at least the parent lines should be there.”In a similar way, Solynta wants to do that for other markets, for example by entering into a partnership with a chip or french fries manufacturer. We are more flexible and set up gramma focusing on characteristics that are important in other markets.

In the end, a kind of biblio-Teek emerges, from which properties can be brought together in a targeted manner. Computer models that track the breeding results play an important role in this, according to Van der Vossen. They also make the outcomes of crossings increasingly predictable. Combined with the speed of hybrid de-breeding, properties can therefore be crossed quite quickly.

What will be possible in the future if several properties come together: will the problems with Y-virus and late blight then be over? And what kind of returns are possible in the future? “I do think that we can overcome the most important potato diseases through breeding”, ant-woordt Van der Vossen. “It is not a single from Solynta, where work is underway to create and assess new crossings. A large part of the seed harvested here in the greenhouse is allowed to move on to the field, where a next selection round takes place. Because in the end it is there where the new potato varieties have to perform well. announced collaboration between Solynta and Royal Avebe. With Averis, the breeding company of Avebe, Solynta will work on a hybrid starch potato. “This is where our knowledge and our hybrid platform come together with Avebe’s product knowledge. Together we can work on the properties you need for a good starch potato. Because they know that.” more agile than the classic refinement. There, too, progress is accelerating, for example with the help of marker technology. But bringing properties together with them is not nearly as fast as we can.”When parent lines will soon be ready for both table potatoes and starchy apples, then it is a relatively small step, according to Van der Vossen, to solve a breeding problem to cross several phytophthora resistance genes in a few years, so that you get a strong resistance that cannot simply be broken. You can even compose them in a targeted manner per region or alternate resistance genes if there is reason to do so. And because you can work specifically on stronger breeds, the yield can also be further increased.”

Stories about reduced vigor of hybrids, he refers to the trash. “At the beginning of the journey, we are certainly dealing with inbreeding depression, just as it happens with other hybrid crops. But just like hybrid May and beets, the hybrid potato will eventually score high on growth power. If you start with disease-free material, and the growing conditions are good, then in a season with 25 grams of seed you can harvest a yield of 80 tons.”

It’s not that far yet. The first countries to embrace the hybrid potato are countries far away. Countries where it is difficult to bring tubers. “For a grower in Africa is already making tremendous progress by growing a potato from seed. For example, it makes a jump in yield from 15 to 30 tons per hectare in one fell swoop, thanks to disease-free starting material. Of course, his costs are getting higher, but he knows that he can get a stably higher yield. In addition, there is already an infrastructure for growing vegetable plants: it is in line with the local way of working. After the first year, you could also propagate the potatoes from tubers for several more years.”

A similar development provides Van der Vossen for the markets closer to home. That a starch potato will soon be grown in the greenhouse, planted out and the yield will then be processed at Avebe is not very likely. “We’re here for potty training. And that provides certainty at the start of the crop. In addition, we know that if we start with high-quality seed material, we can currently achieve up to fifteen percent more yield. In the Netherlands, seedlings from the greenhouse can only be planted outside after ICE Saints, which leads to a slower start of the growing season and thus to a loss of yield. So that propagation step via tubers will be in here

North-West Europe is mostly.” He expects that the first propagation steps will remain the task of speci-cated tribal growers who procure plants from special breeding companies, or who will sow and grow plants themselves in the greenhouse. “You can then propagate tubers from it for a number of years. But how exactly that will go, we do not yet know. The difference with the current approach is that there will be more gradient in varieties, because continuous improvement remains possible.”

In any case, what the visit to Solynta shows is that the pioneering phase of the hybri-the potato is over. In front of the greenhouse, Van der Vossen shows some climate chambers, in which the growing material is subjected to all kinds of tests. Spread over the test locations and the headquarters in Wageningen, 80 people now work at Solynta. “There were 65 last year. Until recently, we were mainly engaged in technology development. Now the stage has come where product development begins to gain the upper hand, including setting up the commercial side.”

The facilities for seed production have also been set up, which will take place partly in the Netherlands and partly abroad. “That capacity should be there as soon as we scale up.”

What are we going to notice here in the Netherlands as the first of the hybrid potato? Will the hybrid table potato hit the shelves soon? Van der Vossen thinks that attention to sustainability will bring the varieties closer more quickly. “For example, we are participating in a project of the province of Gelderland, in which we will develop and test hybrid varieties for organic cultivation. Strong disease resistances, including against phy-tophthora, play an important role in this. But with hybrid technology, we can also focus on varieties that need less water or nutrients.”