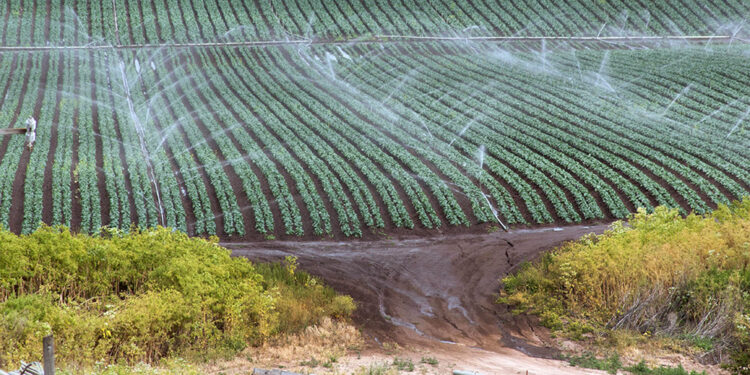 Center pivots irrigation shouldn’t cause runoff and soil erosion unless there are design problems. For low-pressure systems, either use a different sprinkler type or increase pressure. These changes allow water to be applied over a larger area, reducing the application rate.

If system design is acceptable but intake rate is not, some type of tillage may be necessary to increase the water infiltration rate. If infiltration cannot be increased, use tillage to create surface storage as water that is stored or puddled on the soil surface can infiltrate later.

A research study was conducted in commercial potato production fields irrigated by low pressure center pivot irrigation systems for three growing seasons in southern Idaho, USA. Plots were established to give several replications of both conventional and reservoir tillage under the outermost spans, where the highest application rates occur. The soil was silt loam, and the topography varied from nearly level to 5% slopes. The sprinkler devices included spray nozzles on drops (spraydrops), spray nozzles on booms (spraybooms) and rotator spray nozzles on drops (rotator spraydrops) with an operating pressure of 138 kPa.

The purpose of this study was to investigate and assess the role of reservoir tillage on controlling runoff, uniformity of soil water content throughout the field, and crop yield, as compared with conventional tillage. Reservoirs tillage effectively reduced runoff losses to less than 1% of the applied water, when the dike were intact and remained stable.

Polyacrylamide (PAM) applied to furrow irrigated fields at rates of about 1 kg per hectare has been reported to enhance infiltration and control irrigation-induced erosion. Under furrow irrigation PAM dissolved in the furrow stream contacts the soil surface and stabilizes soil structure against shear-induced detachment by enhancing particle cohesion, thereby preventing transport in runoff.

Field results indicate that significant, and long lasting, infiltration enhancement and runoff and erosion control can be achieved in all studied soils with a single application of 1 kg PAM ha -1 . In the silty-loam Fluvisol PAM treatment reduced erosion approximately 64 and 76% in fallow and crop growing plots, and enhanced infiltration in 34 and 18%, respectively, when compared to control. In the sandy-loam Fluvisol the results, when compared to control, were more dramatic with PAM application reducing soil erosion 98 and 96% in the fallow and crop growing plots and enhancing infiltration in 47 and 45 %, respectively.

What does PAM do? When used according to the NRCS standard, polyacrylamide (PAM) increases infiltration in addition to nearly eliminating furrow erosion. Increase in infiltration varies with several soil attributes, especially texture. Silt loam soils have shown about a 15% increase in net infiltration and a 25% increase in lateral wetting from shallow furrows between low, flat beds.

PAM preserves a more pervious pore structure during the formation of surface seals during irrigation, thus allowing increased infiltration. The greater infiltration associated with PAM-treated furrows can boost crop yields in sloping areas such that it’s almost like giving the farmer the added yield equivalent of another irrigation during the growing season. Studies have shown that because PAM holds the top soil in place, it also keeps phosphorus, nitrogen, pesticides, weed seeds, and microorganism out of waste water.

Can PAM go through sprinklers? Studies in Washington and Idaho have shown that injecting PAM directly into sprinkler systems reduces surface ponding and runoff and promotes more even plant growth because of the more even water distribution. In these studies, the cost ranged from $5 to $8 per acre.

When considering the potential benefits of PAM, this ability to apply greater amounts of water without runoff or surface puddling and sealing becomes particularly valuable under mid-summer conditions when center pivot irrigators find it difficult to keep up with plant water demands, because of the limitations of sprinkler application rates under center pivots.

Do I need to make any management changes when using PAM? Yes. PAM maintains higher infiltration rates throughout an irrigation than is usual with untreated water, so if irrigation practices are not adjusted, PAM can worsen variability of infiltration from upper to lower field ends. If inflow rates are increased during initial advance and then reduced to the least sustainable flow once runoff begins, erosion is still greatly reduced and advance times shortened, thereby improving infiltration uniformity.

Since PAM use increases net furrow infiltration, water management may need to be adjusted to avoid over watering. In fields with steeply sloping furrows (>2%), infiltration tends to be lower and water normally advances rapidly down the field. Improved infiltration and longer furrow advance times resulting from PAM treatment are not likely to be a problem here. However, on very steep fields, PAM may increase net infiltration enough to warrant reducing irrigation set times, since more water goes into the soil in a shorter time.

In fields with gently sloping furrows (0-0.5%) and especially for non-trafficked furrows, infiltration can be relatively high and advance times excessively long with PAM use, leading to nonuniform, down-furrow water application. This is particularly a problem when the inflow stream is not increased. PAM allows irrigators to increase inflows without increasing furrow erosion losses. Enlarging initial stream size greatly reduces advance time and equalizes infiltration opportunity times for the top and bottom of the field.

Polyacrylamide can control soil erosion that occurs with irrigation. However, like many farming practices, its use, effectiveness and economic return varies from field to field. 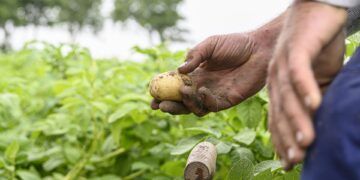 HZPC: “So we study the ideal potato” 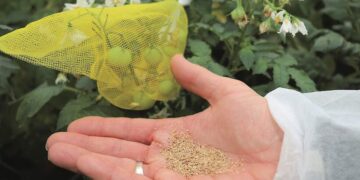 THE RISING POPULARITY OF EXTRUSION TECHNOLOGY

WUR: ‘Be careful with resistance to Phytophthora’