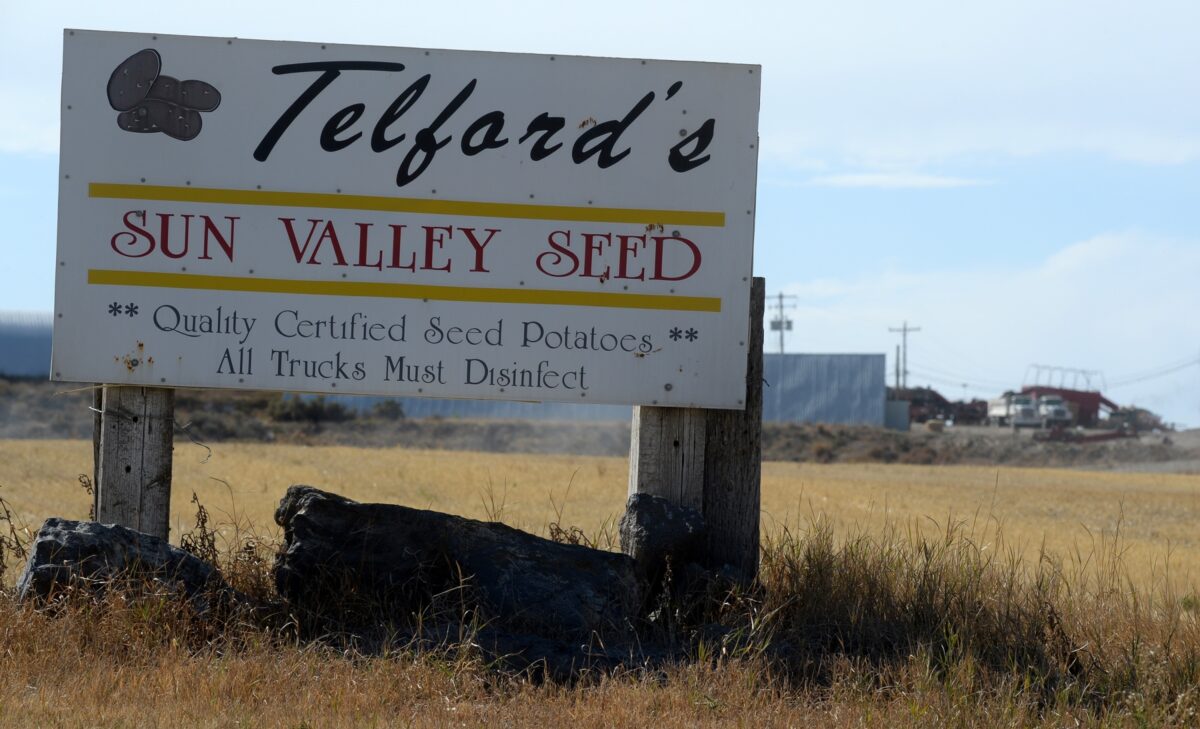 A life in farming seemed to be preordained for Mike Telford.

“I grew up in Utah in Bountiful. My father was what they called a truck farmer, and they grew all the vegetable crops you can imagine,” Telford said of his childhood. And though his father’s truck farm was across town he grew up working on a neighbor’s vegetable farm every summer from the age of seven until he was a teenager. “I grew up working for the neighbor, a Japanese man that made his whole life off of eight acres,” he said. “Anything you could bunch, I grew up bunching. Radishes, onions, parsley, asparagus beet greens, green onions.”

Surrounded by farms growing up, for Telford it was only a question of which direction he might choose. Would it be farming, ranching or both? “I had an uncle who was a rancher — a cowboy — and that’s what I always wanted to do, so I bought my first cows in the ninth grade with my own money,” he recalled. He would continue raising cattle through high school and college and he continues to raise cattle to this day. On a clear October morning with nothing but clear blue Idaho skies Mike Telford pulled his truck to a stop on a bench overlooking a seemingly endless field of sugar beet greens.

“This is the home place, this is where we raised our family,” he said looking across the field of sugar beets in the high desert of south-central Idaho. The homestead is located on a bluff east of Dietrich in an area called Hidden Valley. For Telford and Shannon, his wife of 48 years, the farming operation has become very much of a family affair. Raising eight sons and two daughters they have seen five of their sons continue to farm and raise cattle in the area.

Telford said that being able to raise their family on the homestead and working with his sons is the best part of farming. They also have 45 grandchildren. “I know all their names, but don’t ask me when their birthdays are,” he said with a laugh. There’s a sense of quiet accomplishment as he spoke of his life’s journey that has brought him to this point. The seed potato harvest in Lincoln County was drawing to a close to be followed by the sugar beet harvest.

Today, Mike and his sons Aaron, Ryan and Bob run Sun Valley Seed and Lost River Seed. Each operation encompasses about 5,000 acres for a total of 10,000. They grow Russet Burbank, Altura, Ranger Russet, Yukon Gem, Payette, Clearwater, Northwest Norkotah 90, Northwest Norkotah 218 and Northwest Norkotah 111 seed potatoes. Along with seed potatoes and sugar beets they grow alfalfa, timothy and feed corn along with raising cattle. “We have a 10-year rotation up in Arco,” Telford said. “The way it works is we’ll do five years of alfalfa and we’ll do grain, potatoes, grain potatoes and we’ll go back to alfalfa.”

In the Richfield and Hidden Valley area, depending on water availability they try to maintain a five-year rotation of wheat or corn, followed by potatoes, wheat or sugar beets, wheat and then potatoes. Another son, Mark, has started his own seed potato farming operation in the Arco area specializing in Dark Red Norlands and Chieftains. He also assists with oversight of the Lost River operation. Their youngest son, Jared, recently sold his interest in the seed farms to expand his pure-bred Angus bull operation, also in Arco.

A sixth son, Jake, trains and competes nationally in reined cow horses out of Caldwell, Idaho. He recently became the fourth National Reined Cow Horse trainer to become a $2 million rider. It hasn’t been an easy road to travel, it never is when it comes to farming. After almost 50 years of farming and ranching in Idaho, Telford, who turned 74 on Nov. 19, has seen his share of financial setbacks. On the day he graduated from Brigham Young University (BYU) with a degree in agriculture economics in 1972, Telford moved to Hazelton, Idaho, where he had put a down payment on a farm.

For the first two years he attempted to make a living solely as a cattle rancher, unsuccessfully. “I figured out I couldn’t make a living and pay for places with nothing but cows, that’s how we got started doing more farming,” he said. With that decision he started growing potatoes for Simplot and soon growing sugar beets. It was during this time that he moved to his current homestead in Hidden Valley, east of Dietrich, and became the middleman for a group of investment bankers that were using farmland for tax shelter purposes. Once again Telford found himself in financial straits.

“The whole thing crumbled in a year and a half and I was left completely on my own,” Telford said. “I was just a young kid, you know. I went to everyone involved and said ‘If you’ll transfer some debt on to this 400 acres, the original place we’re sitting on and let me assume that debt that would create equity in the other place and when you get that sold, you’ll get your money.’”

Telford said it was an offer the investors couldn’t refuse. They could either work with him and eventually recoup some of their original investments or let the entire project go into bankruptcy. From that setback Telford was able to help recover their investments and build up his own equity on his homestead. “That’s how I got my start and from that original 400 acres, we’ve added to it and added to it to where there’s about 2,500 acres,” he said of the original homestead in Hidden Valley.

It was another turn of events in 1982 that would result in changing his focus from processing potatoes to seed potatoes. Throughout the years he has continued to raise Holstein heifers and in 1982 he had purchased land in Richfield for grazing purposes and to grow some seed for his Simplot contracts.

It’s kind of colder and we’re very isolated,” Telford said. “There’s nothing but desert all the way around us as far as you can see. It’s real isolated for seed production, and we always had a hard time getting size anyway, so in 1982 we converted over to nothing but seed.” Telford said that when he decided to grow seed potatoes he went around asking people “who’s the best?” He said that every list would begin with John Schutter. They purchase generation two, or field year three from Schutter Farms in Montana and then grow out seed for their commercial growers.

“I determined that I had to buy seed from John Schutter and find out and learn everything I could from him,” he said. “So, I called him and they were all sold out. I think it was the third year of me pestering him before he finally had some seed for me. And from that I just developed a wonderful relationship with John and his family.  “He was just a great mentor, I can’t say enough about how good he was to me. I still buy seed from the Schutter family

” Thirteen years ago, Telford began looking to expand the farm’s acreage as his sons started joining in the operation. All the land around Richfield and Hidden Valley had been bought up by dairymen in the area and he was forced to look elsewhere.b “We were looking for someplace to expand to make room for the family,” Telford said. “We looked at Montana and we looked everywhere and the opportunity presented itself in Arco. We’re sure glad that happened. We just love it in Arco and it’s been very, very good to us.”

Telford said 2021 was one of the lowest-yielding years in memory and he blamed it on hot weather.  “The hottest weather we had all year was in June, we didn’t have anything that matched that all through July, all through August, the hottest we had was in June and it came early in June, and I think that affected the set,” he said. “The seed is high, high quality, looks great but we just grew vines instead of potatoes.”

Last year’s heat also exacerbated drought conditions facing growers throughout the Snake River basin resulting in less recharge in the aquifer system. Major storage reservoirs in the Upper Snake River Basin also were emptied during the 2020 growing season. It’s a situation that has him watching the weather charts and snowpack accumulations this winter. “If there’s no snow in Idaho this year, because the reservoir systems are empty and I’m really concerned about the aquifers, we’ve really got to have a good winter,” Telford said about the water outlook and its impact on the 2021 growing season.

He said they’ll wait until February to see how favorable the snow pack conditions look prior to making their planting decisions. First and foremost for Telford is to meet the seed demands of his customers. Once Telford and his sons determine what the 2022 water year will  be then they will decide how much rotation crops they will plant, saving water necessary to meet their commercial seed potato customers.

“Our potatoes are number one with us, that’s the most important crop, the rest of this is just in rotation,” Telford said. “The most important thing you’ve got are your customers, probably next only to your health. The reason we’ve succeeded is we have wonderful, extremely loyal customers who trust us and we do the best job we can to provide high quality seed and continue to do that.

“We have people who have been buying seed from me for 30 years.”

Drought: How to get started with irrigation, 5 factors for profitability

A life dedicated to perfection to satisfy the consumer

In January 2022, we said goodbye to one of the most creative people in the global fruit and vegetable sector,...

The development of the agro-industrial complex of the Novgorod region and the course of the sowing campaign in the region...

Drought: How to get started with irrigation, 5 factors for profitability