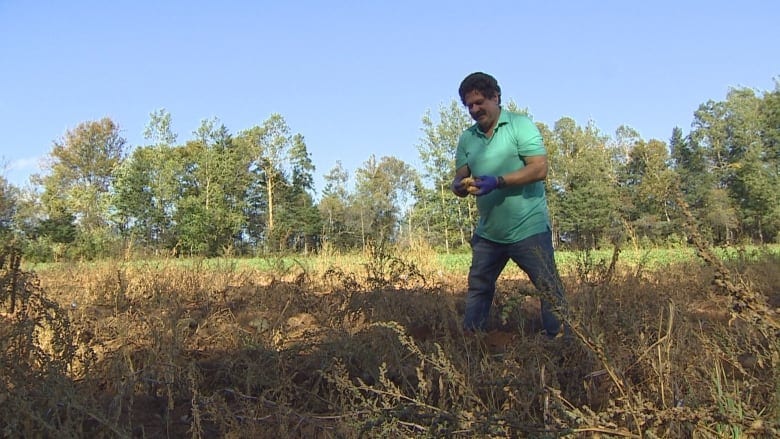 Two research scientists on P.E.I. have spent their summer trying to grow a better potato, more resistant to scab and greening, which are both costly problems for potato growers.

“Common scab is actually caused by a bacterium that’s in the soil and you can find it just about everywhere, not even necessarily in agricultural soils,” said Rick Peters, vegetable pathologist with Agriculture and Agri-Food Canada in Charlottetown.

“It causes a significant lesion on the potato. It’s very disfiguring, so obviously for a table potato, it’s not very good for market value,” Peters said.

“Sometimes it also causes very deep pits and that affects french fry production, too, because you have to peel off so much of the potato to get rid of those pits.”

Scab on the increase

Peters said P.E.I. has experienced warm, dry summers over the last four years and that has led to more instances of scab.

“Diseases I would normally expect to find here, like late blight, we are not seeing,” Peters said.

“Instead we’re seeing more common scab, more things like early blight and brown spot on the leaves. So a different spectrum of pathogens and diseases than we would typically have.”

This is the second year for this research project, where Peters is trying different fertilizer treatments and soil additives to try to change the soil chemistry and reduce the amount of scab.

“This organism tends to attack the potatoes just when they’re starting to form, when they’re very tiny and then those lesions grow as the potato grows,” Peters said.

“So if we can have those treatments affect that infection period, when those potatoes are starting to form, we can have an impact on the disease at harvest time, too.”

Peters said he expects to have some data right after harvest this season about how the different treatments have worked.

He said the field he plants in is called a scab nursery, because they put scabby potatoes back in the soil every fall.

But he said he has been hearing from growers that scab has been prevalent across the Island this summer.

Research scientist Bourlaye Fofana is currently harvesting his fields of potatoes at the Harrington research centre, near Charlottetown.

Fofana is growing 814 different genetic lines in his fields, hoping to find ways to make potatoes better through breeding.

Fofana is trying to reduce common scab, as well as a problem called greening.

“This is a unique collection in the world, and there are a lot of traits that we are working on,” Fofana said.

Greening happens in the field when a potato gets sunburned, but also on the store shelf when potatoes are exposed to artificial light.

“We are looking at greening, for example, to see what lines are resistant or tolerant to greening,” Fofana said.

“We are looking at … the scab resistance and non-resistance, what is the difference? And try to understand if we can take that and put that in a high-yielding popular cultivar like Burbank.”

Fofana has been working on the problem of greening since 2014, and scab since 2016.

“Right now we have two clones that we are in the process of registering as a variety, those are close to market,” Fofana said.

“But taking the process further in the popular varieties, that is something we are working on right now.”

Fofana’s goal is to take the best genes to prevent greening and scab and then the Agriculture Canada breeding program could add them into popular varieties.

“So, for example, we know that Yukon Gold, Russet Burbanks, they are all greening but they are very popular,” Fofana said.

“How can you transfer the gene in those, by new technologies.”

Nancy Russell has been a reporter with CBC since 1987, in Whitehorse, Winnipeg, Toronto and Charlottetown. When not on the job, she spends her time on the water or in the gym rowing, or walking her dog. Nancy.Russell@cbc.ca