in Company history, AGROTECHNOLOGY
Reading Time: 10 mins read
A A 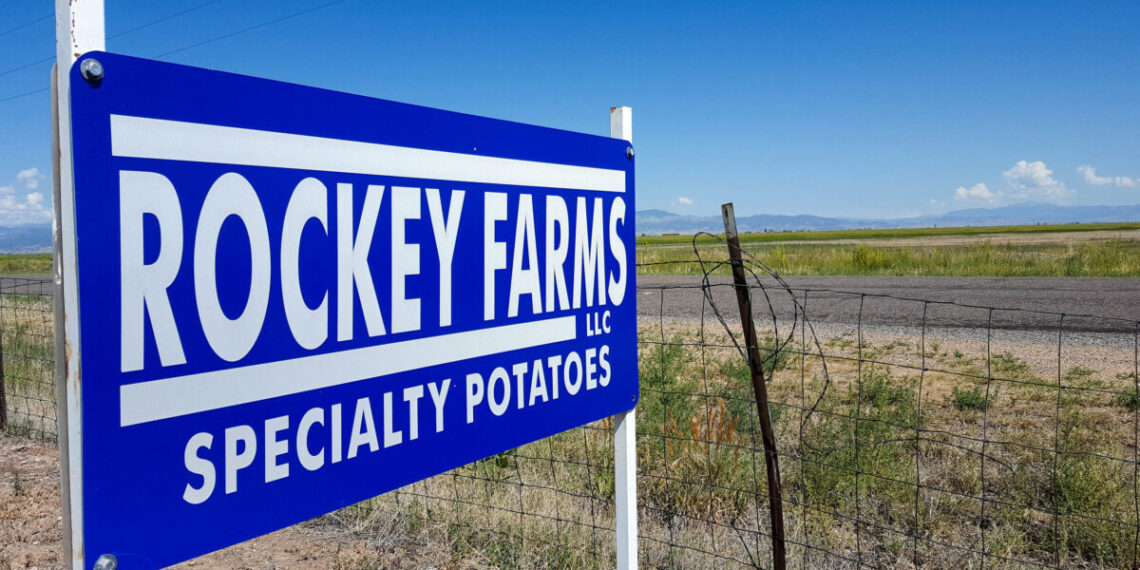 Brendon Rockey’s third-generation irrigated potato farm at Center, Colorado, may be steeped in family heritage, but the operation is far from traditional.

Potatoes grow side by side with companion crops such as buckwheat and chickpeas. Flowering strips cross the fields, making habitat for beneficial insects. Season-long cover crops grow on half the farm, providing grazing for cattle and sheep and a nutrient-dense diet for soil organisms. The farm’s mosaic of plants, animals, and insect life builds soil health while slashing costs and sustaining a livelihood for Rockey and his brother, Sheldon.

“It costs us less to grow a crop than it did years earlier; we’ve maintained yields, and the quality of our potatoes is the highest we’ve ever seen,” says Rockey.

DISCOVERY MADE DECADES AGO

The synergy creating the farm’s well-being results from a process of discovery beginning 30 years ago, with Rockey’s uncle.

Rockey has built on his uncle’s discoveries, shaping what he calls a “biotic” farming system holding potential benefits for any farm. “I can’t think of a single crop that would not benefit from the fundamental principles we’ve put to work in our operation,” he says. The earliest changes on the farm sprang from an “unhealthy” production system, says Rockey.

“We were growing monoculture potatoes and barley in rotation,” he says. “We used a lot of tillage, synthetic fertilizers, fungicide, and insecticide. The soil had low organic matter and poor soil structure, which was indicated by deep sprinkler tire ruts, and disease problems, clods at harvesttime, and poor-quality potatoes,” he says. “We were not caring for the soil proactively. Instead, we waited for symptoms to express, and then we treated the symptoms instead of addressing the cause.”

The result was increasing cost of production without increases in crop production. “That’s a poor economic model,” says Rockey. “I have a different mind-set now. I try to eliminate unnecessary inputs. Instead, I invest in the soil.”

An unwavering focus on investing in soil carried the Rockeys through the sometimes bumpy transition away from a dependence on synthetic fertilizers, fungicides, and insecticides. As plant diversity and livestock grazing have evolved to displace this dependence, soil health has ramped up. Soil erosion from wind “has been greatly reduced,” despite the farm’s high-desert setting, according to Rockey.

“We also see an increase in soil aggregates, and water infiltration has improved,” he says. “The most telling evidence of better soil structure is the lack of ruts left by the sprinkler. Neighboring irrigation sprinklers leave ruts in the field 12 to 18 inches deep by the end of summer. On our fields, the wheels travel on top of the surface.

“Soil tests show that we have increased the carbon in the soil, and that we have higher populations and more diversity in soil microbes,” he adds. “But the best indicators — to me — of soil health are the maintenance of yields while spending less money and while also improving the quality of the crop. Since we grow specialty potatoes, some of which are for seed, quality is very important to us.”

The self-sustaining processes supporting the farm’s production system spin from plant diversity, a universal principle potentially beneficial to any farmer growing any crop. The initial addition of cover crops, for instance, was a game changer for the Rockeys.

“We took the biggest leap forward when we brought diverse crops into the system,” he says. “The first cash crop after that, everything changed. The population of earthworms boomed, and soil structure improved.”

They soon added greater plant diversity to the system. “For example, only one species in our potato field is a cash crop,” says Rockey. “The other species growing in that field are intended to support that main crop. Companion crops like field peas, chickpeas, chickling vetch, and faba beans all support the carbon cycle, fix nitrogen, and provide habitat and a food source for beneficial insects. Buckwheat supports beneficial insects, but also mobilizes phosphorous in the soil. We plant flower strips around and throughout the fields to further support beneficial insects.”

“Since we grow certified seed potatoes, aphids are a major threat to us,” he adds. “They vector viruses that we must manage in order to maintain certification. Having plant diversity in the fields allows us to manage aphids without insecticides. Avoiding costly insecticides reduces our cost of production by about $200 per acre.”

The Rockeys maintain a two-year crop rotation on four fields dissecting the farm’s 500 irrigated acres. Potatoes for both the fresh market and certified seed market comprise the primary cash crop, always grown with companion crops. The second-year crop alternates between quinoa as a cash crop grown with companion crops, and season-long cover crops comprising a mix of warm- and cool-season broadleaf and grass-type species. Flowering strips transect the potato fields.

In a 120-acre field, Rockey may devote the equivalent of eight potato rows to flowering strips. These, along with flowering plants within the potato rows, provide habitat for the beneficial insects helping to prevent disease within the potato crop. To further stimulate biological activity in the soil and to help the mineralization of soil nutrients, the Rockeys incorporate livestock grazing into the production system.

A neighboring livestock producer grazes both cattle and sheep on separate fields of cover crops in late summer and early fall. The Rockeys flip-flop the livestock species so that a cover crop field grazed by cattle will be grazed by sheep the next time that it’s slated to grow cover crops. “I believe having diversity in grazing animals promotes diversity in soil organisms,” says Rockey. “We find enormous returns to soil health from grazing animals on our fields. In addition, we receive pasture rent from the livestock producer.”

While legumes in the companion crops and cover crops — along with livestock — provide fertility, Rockey also applies soil amendments to more adequately fertilize the cash crops. “I spread compost in the fall,” he says. “Mixed in with the compost is a dry fish product and soybean meal. During the growing season, I apply through the sprinkler liquid fish, kelp, soybean meal, and compost tea.” The compost comes from Colorado feedlots.

The Rockeys’ production practices and resulting improvements in soil health have improved water-use efficiencies and helped them reduce the amount of irrigation water they draw from their local aquifer. This is critical because reduced recharge and potential increases in demand for water by multiple sources, including municipalities, could make it difficult to maintain sustainable levels of water in the aquifer, says Rockey. Conserving water and building resilience into their crop-production system helps them position their farming operation for the possibility of reduced water availability in the future.

“For us, water conservation is about more than feeling good about taking care of a resource,” he says. “Our livelihoods are at stake.” The honors recognizing the farm’s innovative cropping system include the National Association of Conservation Districts naming Rockey as a Soil Health Champion. He travels the country speaking to farmers and ranchers about the farming practices he’s developed. “Plant diversity is absolutely essential to farming the way we do,” he says. “It’s a fundamental principle that can benefit any farm or ranch.”

Seeks $1B investment in water: Arizona Governor Delivers
Final State of the State

A new body to represent British seed potato growers has been proposed and aims to ensure the sustainability of the sector...

Seeks $1B investment in water: Arizona Governor Delivers
Final State of the State