in rotation potato crops
Reading Time: 5 mins read
A A 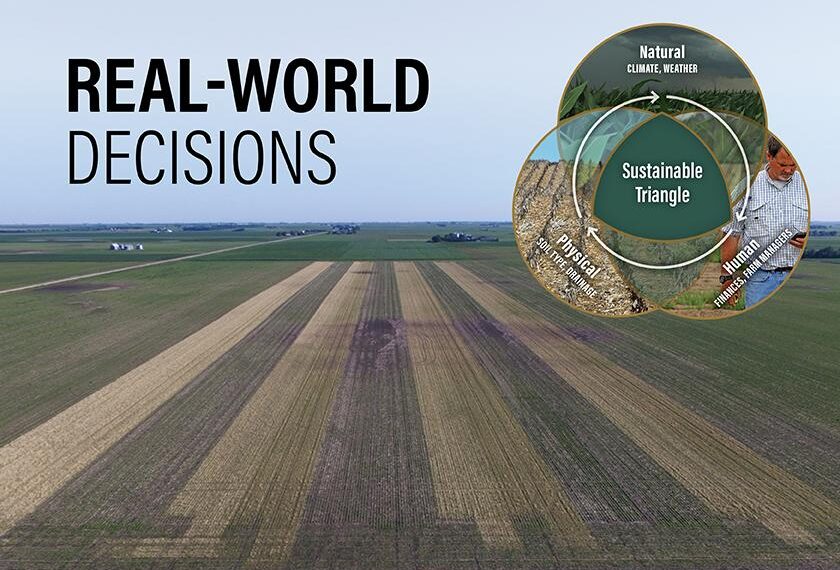 The sustainable triangle is where three environments overlap — the physical environment in each field, the natural environment (climate and weather) and the human environment (everything from profit to attitudes, both yours and your landlord’s). Meet the re-quirements of all three, and your farm will be profitable and sustainable.

Bringing Back An Abused Farm

FARMER 1, a successful no-tiller, was offered a new farm because the owner wasn’t satisfied with yields and wanted to improve soil health and reduce soil erosion. He explained to the owner the soil was too sick to no-till right away. Correcting all the problems would take several years.

“Farmer 1 applied large amounts of lime in multiple applications,” Ferrie explains. “He incorporated it into the top 6″ using vertical till-age tools — a chisel plow in the fall and a vertical harrow in the spring. Two years of vertical tillage removed the compaction. But it took four to six years to fix the acidity problem. That didn’t surprise us because previous experience had shown it takes two or three years after you reach the correct pH for the soil to actually start handling better.”

By the sixth year, infiltration had improved, erosion was under control, residue was decomposing and yield had increased dramati-cally, Ferrie says.

“The grower could no-till most of the field, fixing areas with crusting issues with a vertical harrow pass before planting,” he says. “Seeing the potential, the landowner tiled some poorly drained areas.”

Landlords’ desires are part of the human environment. Farmer 1’s landlord thought cover crops could improve soil health even more. So after the first year of rehabilitation, he planted a cover crop.

Lessons From Eight Years Of Covers

FARMER 2 hoped no-till and covers would improve soil health and infiltration, helping water reach tile lines by creating biochannels. He laid out strips of cover crops versus his normal practice and kept them in place for eight years.

“Cutworms showed up the first year, with damage in the cover crop but none 30″ away where Farmer 2 no-tilled without covers,” Ferrie says. “So cutworm scouting became a priority. The covers improved weed control, eliminating the need for a burndown treatment to control winter annuals. In the spring, killing the cover also controlled any weeds that were present. Soil biology and biodiversity improved but drainage did not.”

When wet spring weather precluded spraying the cover crop, and Farmer 2 had to plant in hood-high cover, the crushed mat of vegetation rendered his planter monitor completely ineffective. In that situation, Ferrie says, ground-truthing the planter is essential.

Financial ROI is a concern. Without improvement in yield, Farmer 2 can’t offset the cost of the cover crop. He is moving away from covers, implementing strip-till and trying to persuade the landowner to install more tile.

Read more in the “Farming the Sustainable Triangle” series.

Growing new varieties is like driving a Formula 1 race car

In addition to good growing practices, take down nematodes and disease with better tools in the toolbox. When it comes...