Quaile Machinery takes to the field

in Company, ADS, Equipment in the field, Europe
Reading Time: 6 mins read
A A 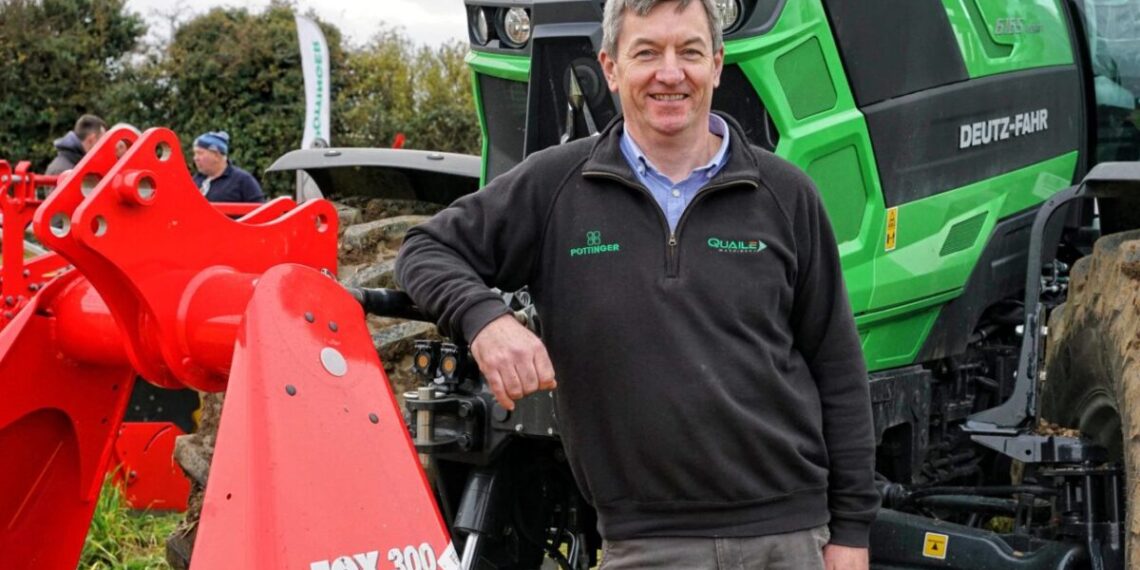 It was the closure of an existing John Deere dealership nearly 10 years ago that set Kenny Quaile on his present course of running a now thriving machinery dealership at Skerries in Dublin.

Kenny had been the service manager for the company when it closed its doors in 2012.

He heard the news on the Monday and by the end of the week, he was in business for himself, taking over from where the company had left off by looking after the customers who had purchased John Deere tractors and other machinery from his former employers.

Running around with a van full of tools was not Kenny’s overriding ambition though, and he soon started looking for agencies, the first of which was Pottinger.

The relationship has blossomed since and the product of the Austrian company has become a firm mainstay of the business. A more recent agency is Deutz Fahr which came to Quaile’s to bolster its representation in the North East.

Recently Quaile Machinery brought these two manufacturers together at a field day near Lusk where both the tractors, and some of Pottinger’s tillage equipment, were being demonstrated.

Deutz Fahr is one of those worthy brands that hasn’t quite made the big time in Ireland although they are as competent as anything else on the market.

Kenny appreciates he is not going to change that perception overnight but believes that perseverance will bring a good number of his John Deere customers over to the German marque.

He notes that the major selling point over other brands is comfort, thanks mainly to the cab suspension which is second to non on the market.

“It’s the first thing that drivers comment on when they try the tractor,” he says.

Kenny goes on to mention that stability and traction are also strong selling points, while the factory in which they are made has impressed him with its modernity and precision.

Most of the tractors the company sells are around 200hp, which is the norm for the mainly tillage area although there is a demand for smaller tractors from large vegetable growers to power their harvesting units in the field.

Another major franchise that Quaile’s has acquired is that of Dewulf.

When it comes to potato and vegetable harvesting, there has been little competition for the main player here in Ireland but, once again, Kenny feels that there is an opportunity for an alternative manufacturer and sales are slowly beginning to take off.

The lifting of maincrop potatoes may have come to an end for the season but there is still some cultivation to be done and cereals to be sown.

Pottinger had brought some of its tillage equipment along to show it working in the field.

The plough and just one pass with pneumatic drills

Chief items of interest were the company’s two Aerosem drills.

The smaller was the the 3002 ADD, a three-metre machine, which the company describes as a ‘pneumatic, implement-mounted drill’.

The implement, in this case, being a power harrow onto which the drill is piggy backed.

On the day this was working, it ploughed the ground into a fine tilth ready for the drill although it wasn’t actually planting the seed.

This type of drill combination is no featherweight. The all up weight approaches four tonnes and it takes a large tractor to handle it comfortably despite it being engineered to keep the main mass as close to the tractor as possible.

One solution to this problem is to take the weight of the hopper and seed from the rear of the tractor and place it at the front. This is the principle behind the pneumatic front-mounted drills.

The company had brought along an example from its own range, the Aerosem 5002 FDD, and it was this that was actually sowing the winter wheat.

The principle of dividing the weight between each end of the tractor would appear simple enough, but to transfer the seed at a steady rate from the front to the rear some extra engineering is required.

Seed transfer puts the pressure on

First, there needs to be a much longer hose to deliver the seed along the length of the tractor.

Long hoses mean more pressure to overcome resistance to an airflow that is required to keep seed suspended while it travels up over the wheels and then into the seed head.

To ensure that the seed is delivered at the required rate, the front hoppers are pressurised to equalise the pressure within the hopper and the transfer tube.

By splitting the weight front and rear, a wider working width can be achieved and these machines are available up to six metres.

Larger hoppers can also be used and to further help with the weight distribution a set of four packing wheels can be fitted to the underside.

When drilling these are wight bearing items and help relieve the ground pressure as well as packing the soil the whole width of the tractor.

They are both steerable and demountable.

Although Quaile has been a Pottinger agent for eight years, Kenny feels that it is only over the last couple of seasons that they have really started making inroads into the market and all the effort is paying off.

He obviously feels at home with the brand, noting that there is a direct line of communication with the management and that he, as a customer, is being listened to.

As a small and reasonably new business in a highly competitive market, Quaile Machinery appears to be prospering.

Kenny is not simply looking for short-term gains, he takes the longer view and those manufacturers that share this philosophy will, no doubt, benefit from the dedication of both him and his staff.