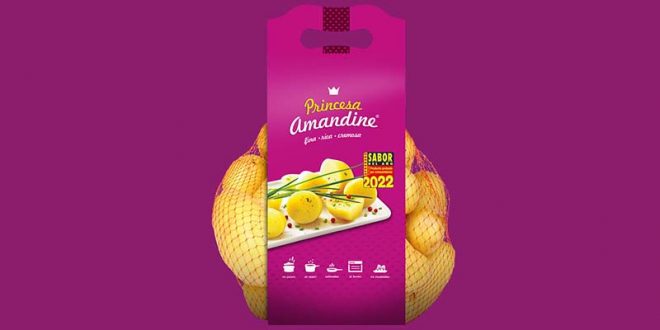 In June, when there is no production in France, Princesa Amandine Ibérica will begin supplying its French partners with new potatoes for the first time. This was one of the goals of the project launched three years ago by the four marketers who comprise the association: Ibérica de Patatas from Madrid, Zamorano from Barcelona, Udapa from the Basque Country, and Campotec from Portugal.

Miguel Garca, of the Zamorano company, announced during a visit to the farm of Finca Gayca and Messeguer, where the liftings of the new cultivar harvest have already begun.

In Spain and Portugal, production of the Princesa Amandine potato began in 2020 with an initial total cultivated area of 40 hectares in the provinces of Seville, Murcia, Valladolid, and Silveira Torres Vedras. The area was increased to 80 hectares in 2021, and the forecast for 2022 is to boost to 120 hectares, tripling its cultivation.

“We have tripled the production area in two years and we want to continue expanding the farmland by adding the Álava area in the Basque Country,” Jean Michel Beranger, CEO of Princesa Amandine Ibérica, explained, cited by Revista Aral.

With a larger production area, the association’s goal is to reach a marketed potato volume of 5,000 tons by the end of 2022. The progression in marketing has also been constant, going from 1,500 tons in 2020 to 5,000, more than tripling the figure of two years ago.

Currently, the potato in the Spanish market can be purchased in three different formats: the classic bag of 1.5 kg with potatoes of caliber 46-65 mm, the format for microwave, Princesa Amandine Micro of 400Gr., of smaller caliber (35-45 mm) and in compostable cellulose container 100% free of plastics and, finally, in the new format bulk box of 6 kg for centers type cash and carry. The objective is to implement in all its formats the so-called monomaterials, 100% recyclable in the yellow container.

Germicopa, the French spud variety leader, developed the Princess Amandine variety in the 1980s in Châteauneuf du Faou by crossing the Charlotte and Marianna potatoes. It is the result of a decade of research that has been conducted while respecting natural cycles and selecting varieties based on agronomic, commercial, and flavor criteria. It is the only brand that provides the same variety to consumers throughout the year.