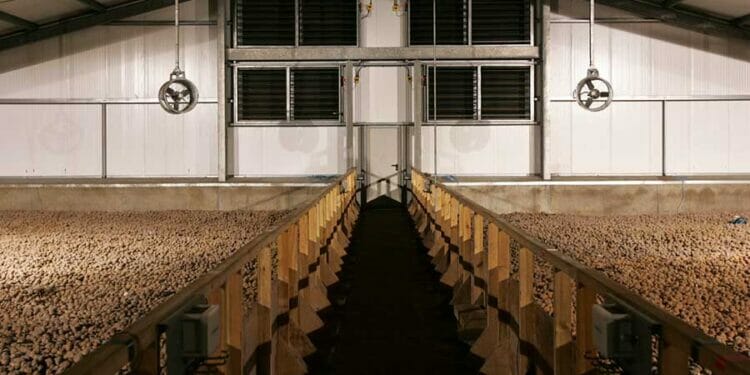 An EU ban on the use of chlorpropham as a substance inhibiting the sprouting of potato tubers has been in force since last year. In this situation, maintaining optimal temperature and humidity conditions in the storage room seems to be the most reasonable solution.

Even after harvesting, the potato tuber is still a living organism in which certain physiological and biochemical processes take place. Creation of inadequate physical conditions for storage results in serious losses in the total weight of tubers. Let us consider in which environment the tubers are dormant for the longest time.

Take care of the appropriate temperature and air humidity

Immediately after harvesting the tubers from the field, the potatoes should be sorted to remove contamination and infected tubers, which are a potential source of bacterial and fungal diseases. In storage, this stage is called tuber drying.

Then, about 1-2 weeks after being placed in storage, the potatoes go through a period of preparation for dormancy, the so-called maturation, during which intensive respiration and evaporation processes still take place, which results in the loss of some starch, water and vitamins. The epidermis becomes corky, and the damage caused during harvesting heals. In order for this process to run properly and without unnecessary disturbances, it is necessary to maintain the temperature at 10-18oC and relative air humidity at 90-95%.

Another process that tubers enter in the storage process is cooling, the main purpose of which is to prepare the tubers to their proper dormant state. Cooling down takes about three weeks and consists in lowering the air temperature to 2-10oC (depending on the potato variety and use direction) and maintaining the air humidity at the same level as in the previous stage.

Only after nearly a month from placing the tubers in the warehouse, the potatoes enter the proper dormancy phase. In the case of edible varieties, the optimal storage temperature is 4-6oC, seed potatoes 2-4oC, potatoes intended for food processing 6-8oC, while tubers intended for industrial processing are best stored at 2-4oC. The recommended air humidity is 85-90 percent. The length of dormancy is a genetic feature and varies depending on the variety, but if the recommended storage parameters are maintained, tubers can be stored for up to eight months.

Maintaining appropriate physical conditions in the warehouse is crucial to maintaining the quality of the raw material. At lower than recommended air humidity, tubers quickly lose water and wilt, while at higher humidity, putrefying processes begin. The air temperature has a significant impact on the intensity of the tuber respiration process – when the temperature is too high, the tubers breathe more intensively, which results in weight loss and rot-related losses. Too low temperature is extremely unfavorable, especially for potatoes intended for consumption or food processing, because it leads to a reduction in taste and an increase in the content of reducing sugars.

If not chlorpropham, then what?

This year, many potato growers may have problems with tuber storage due to the withdrawal of chlorpropham preparations – a germ-limiting substance – last year. Instead, producers of plant protection products offer other inhibitors based on natural substances, such as: maleic hydrazide in the form of choline salt, mint oil, orange oil or 1,4-dimethylnaphthalene.

Orange oil is of particular interest as it prevents germination for up to three weeks (for a natural inhibitor it is very long). Its great advantage is the lack of a grace period – potatoes can be delivered for sale immediately after applying the agent. The recommended dose is 100 ml / 1000 kg of potato tubers. The manufacturer advises to use the preparation immediately after noticing the first sprouts. Treatments should be performed at 21-day intervals.

Another noteworthy preparation is 1,4-dimethylnaphthalene, a hormone that prolongs sleep. The maximum dose of this agent is 20 ml / 1 ton of potato tubers and it can be used immediately after placing the raw material in the storage room. The manufacturer recommends performing treatments at an interval of at least 28 days with a maximum number of 6 treatments throughout the storage period. Unlike orange oil, this substance has a 30-day grace period. Both preparations are used with aerosol generators in forced-ventilated storage rooms.

The disadvantages of natural germination inhibitors include the relatively high price and lower, compared to chlorpropham, effectiveness.

87 / 100
Tags: potato marketpotatoes in storageproblems in storagestorage control
Next Post

With the digital platform, DLG is offering the first international agricultural platform in the virtual world. The new business platform specifically combines the live experience of a trade

With the digital platform, DLG is offering the first international agricultural platform in the virtual world. The new business platform specifically combines the live experience of a trade fair with innovative digital information and networking.

From November 2021, you can use AGRITECHNICA digital for your product news, online events, and visitor engagements – smart and targeted.

The Potato Expo, the largest conference and trade show for the potato industry, has always been the place where growers, suppliers, and industry experts come together to connect, grow and share ideas.

At this year’s show, there will be a lot to catch up on:

LAMMA show held at the NEC is the UK’s leading agricultural machinery, equipment and technology show attracting over 40,000 visitors. LAMMA, which continues to offer

LAMMA show held at the NEC is the UK’s leading agricultural machinery, equipment and technology show attracting over 40,000 visitors.

LAMMA, which continues to offer free entry and car parking, will build on the event’s reputation as the most diverse and innovative machinery, equipment and services show, covering all sectors of the farming industry under one roof.

With 11 halls packed with new ideas and cutting-edge equipment – the event will provide a key platform for exhibitors to introduce ground-breaking innovations to the market.

The event will stay true to its roots, attracting not just the large companies but also hosting smaller agricultural engineering and machinery companies from across the UK, ensuring a fantastic array of products to suit all sectors of the industry, whatever your budget.

The University of Idaho Extension presents the 54th Annual Idaho Potato Conference and 38th Ag Expo to be held on January 18 – 20, 2022 in the Pond

The University of Idaho Extension presents the 54th Annual Idaho Potato Conference and 38th Ag Expo to be held on January 18 – 20, 2022 in the Pond Student Union Building of the Idaho State University.

The conference covers a wide range of industry topics ranging from variety development, management practices and economics, marketing and political issues. There are Idaho and Washington Department of Agriculture Pesticide Handler credits available.

There is also a series of nine presentations on industry topics presented in Spanish. The Ag Show is held in Holt Arena and there is an extensive Trade Show in the ballroom of the SUB. There is also a Grower-Speaker Social Wednesday evening, poolside at the Red Lion Inn.

This annual conference is held by the University of Idaho in cooperation with the Idaho Potato Commission Idaho Growers-Shippers Association, Idaho State University Association of Commerce and Industry, Spectra Productions Trade Fair Exhibitors, and the Idaho Center for Potato Research and Education Raw Products Committee of Idaho.

Well-curated concurrent seminar topics with a focus on current and future trends of the industry addressed by eminent speakers.

Decision-makers and technical personnel from snack, bakery, and confectionery manufacturers from India and neighboring countries expected to visit this trade fair.

Inter FoodTech is a brand new trade fair backed by a team with over 15 years of experience in organizing B2B trade fairs in the food and food processing & packaging industry.

Conceptualized to offer something for everyone associated with the food processing industry, Inter FoodTech with its well-curated supporting programs and interactive experiences create ideal opportunities for industry members to interact with existing and new connections.