in Market, News
Reading Time: 6 mins read
A A 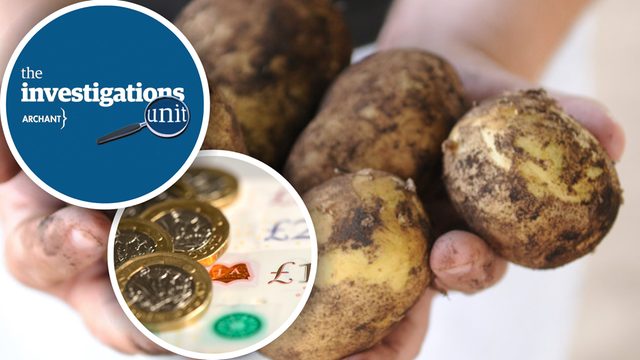 The sixth month of our inflation tracking project reveals potato prices have shot up 60% in just a few weeks – Credit: Archant

The prices of basic foods including chicken, vegetables, milk and potatoes have increased by up to 60% in local supermarkets over the last six months.

A standard 2.5kg bag of white potatoes in both Sainsbury’s and Tesco are now an eye-watering 61 or 62% more expensive than in April respectively, and have shot up 51% in Aldi too.

In Morrisons in Norwich this week a head of broccoli was 50% dearer than six moths ago, while in Asda 500g of pasta costs 21% more.

The figures are revealed in our latest monthly survey of local prices in the six largest supermarkets.

Discount retailers’ prices have been hit too with Lidl charging 23% more for four pints of milk than it did in May, and free range eggs in Aldi up 12%.

Worryingly, food prices continue to rise despite inflation having come down from its August peak, with petrol prices falling significantly and grain shipments out of Ukraine resuming.

They warned that the summer’s drought – combined with producers abandoning potatoes for more lucrative crops amid increasing energy costs – will mean retail prices continue to climb through the autumn.

Food still goes up as petrol goes down

Since April this newspaper has visited Norwich branches of Morrisons, Tesco, Sainsbury’s and Asda – and since May, Aldi and Lidl – to track the effects locally of inflation on a basket of two dozen essentials including food items, toiletries, fuel, and toilet paper.

Fuel price increases, caused in part by restricted oil and gas exports from Russia, peaked in July – at 191.9p a litre for petrol and 197.9p for diesel, at Tesco – and have since fallen by more than 20p per litre.

Petrol prices this week, of around 167p a litre, are only around 5% more than they were in mid April.

But across the six retailers the average prices of products including chicken, milk, eggs, pasta, bacon, salad, broccoli, ketchup and potatoes have continued to rise since our last pricecheck even as fuel costs have fallen back down.

Dr Mike Brock, associate professor of economics at the University of East Anglia, explained: “People ask how prices are still rising when they see the things that contribute to inflation falling.

“But different products have different supply lines with different timescales.

“If for example grain prices rise, products where it’s used immediately might go up quickly.

“But for chicken, farmers may have a store of grain at older prices, and then when they go on to using the newer more expensive grain that’s when they pass those increases on.

“And it may be that retailers have contracts with wholesalers, and it’s only when those contracts are being renewed that those increases kick in.”

Potatoes have risen shockingly this month. As recently as July, spuds were around £1 for a standard 2.5kg bag, largely unmoved since April.

Pete Legge, of Legge Farms in Southery, said: “Potatoes have been incredibly cheap for two years, in fact farmers have been losing money on them since spring of 2020. All that’s really happened is they’ve come up to a normal market value.”

He said sales of raw potatoes have declined as consumers have switched to pre-packaged or processed alternatives, or frozen chips, or even takeaways and dining out.

“So farmers have been growing too many, and that’s kept prices low. But now farmers are pulling out. Combine that with a drought and prices are going to go up and up.”

He has heard three major Norfolk potato producers will abandon the crop after this year’s harvest – projected to be the worst for decades after the driest summer since 1976 – while most others are reducing the acreage given over to the tubers.

“Red diesel has doubled in price, fertiliser has tripled, and with the electricity prices too – there’s just not enough money in it.

“So my hope is that prices will improve [get higher] as the season goes on, at the moment the prices don’t cover our costs.”

William Gribbon, farms director at Heygate Farm in Swaffham, explained: “For all vegetables, we’re governed by the weather. It’s mother nature who governs the size of the crop and the size of the yield.

“When it gets to 25 degrees, the potato plant shuts down and doesn’t grow, and we’ve had a lot of consecutive days over 25. And a potato is 85% water, so it needs water to grow – and we’ve had a drought.

“So there’ll be a lack, especially of larger baking potatoes, later in the season.”

The nitrogen fertiliser which cost Mr Gribbon £180-a-tonne three years ago is now trading at more than £800-a-tonne.

“Prices will continue to increase,” he said, “and they’ll increase more if the farmers can’t get the prices to afford to grow them, because more farmers will switch to growing other things. People aren’t going to grow potatoes for nothing.”

Avoid brands to save money – and get hit by higher inflation

Some of the products in our basket – including wine, beer, bodywash and deodorant – have proved remarkably stable and resistant to inflation.

Others including Tropicana orange juice, Dolmio pasta sauce, Hovis wholemeal bread and McCain oven chips have leapt up and down with specific in-store promotions but not trended upwards like the fresh produce.

Dr Brock explained: “Branded goods are often marked-up more than unbranded fresh produce, so it may be they can absorb rising costs without increasing the price.

“But of course people on lower incomes tend to avoid those products anyway, so they’re feeling this far more because they’re less likely to be buying the products which have resisted price increases.

“We hear about inflation at nine, ten, 12%, but some of these necessity products are seeing the biggest rises – and that’s where people’s spending power is shrinking most severely.”