in Products of processing of potatoes
Reading Time: 4 mins read
A A 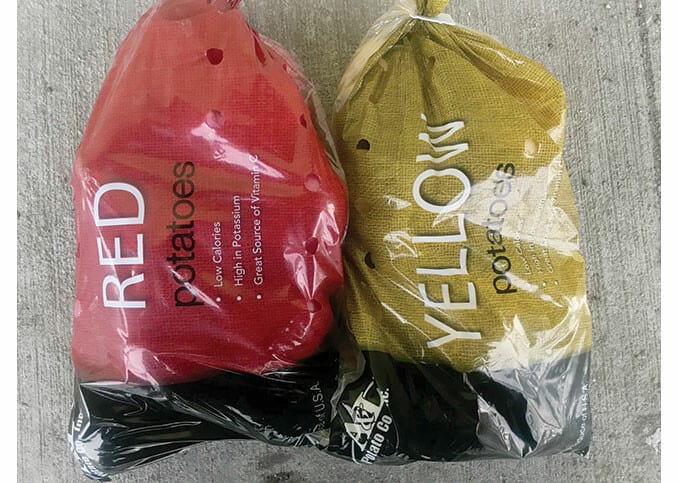 4.5k
SHARES
25.3k
VIEWS
Share on TwitterShare on linkedInShare on TelegramShare on Email

Grower-shippers of Red River Valley potatoes offer a selection of consumer packs — most commonly 3- and 5-pounders — in addition to the larger-sized sacks, cartons and totes they ship to retail, wholesale and foodservice customers.

Some say demand for consumer packs is on the rise, while others find that it’s holding steady.

Lay’s Dill Pickle Chips are Back in Subway

The company can pack any size a customer requests.

“Our facility was built for packaging,” he said.

Packaged business ebbs and flows, depending on contracts with customers, he said.

He estimated that 80% of the company’s sales are in consumer packs.

The 3-pound bag is popular for B-size or smaller potatoes.

“Smaller potatoes in smaller packages is a trend,” he said.

Kreis said he has seen no indications that the popularity of consumer packs will decline anytime soon, since they offer quality potatoes in a convenient format.

The company offers a wide selection of sizes ranging from 3-pound bags to 50-pound cartons or sacks.

Bruer said she thinks more consumer packs now are being put up by shippers versus repackers because it’s more economical that way.

She also said bulk displays do not move as many potatoes as dispays of packaged potatoes.

Bulk displays are for consumers who just want a single potato, she said.

Consumer packs are a better value in the long run, she said, since a bag containing several potatoes can be stored for three months in a refrigerator chiller drawer.

Requests for packaged red and yellow potatoes vary from year to year at O.C. Schulz & Sons, Crystal, N.D., said Dave Moquist, an owner of the company.

He said he has heard that demand should be up this year.

The firm can pack any size bag, but by far the most common requests are for 3- and 5-pound packages, he said.

Occasionally, a customer will ask for a 2- or 4-pound bag, but 10-pounders have become a rarity.

J.G. Hall & Sons, Edinburg, N.D., puts up a lot of packaged product under private labels and under the company’s own label, said Jackson Hall, manager.

The company ships 5- and 10-pound consumer packs of red and yellow potatoes and underwent a major switch to 5-pounders from 50-pound foodservice packages when COVID-19 hit, he said.

Sales of some packaged fruits and vegetables have increased as consumers try to avoid picking up food items that others have handled during the coronavirus pandemic, shippers have said.

But potato growers don’t think that’s the case for their product.

“Potatoes are different because they’re not ready to eat,” Rerick said.

Consumers know they have to cook potatoes before eating them, so there’s not much fear of contracting COVID-19 from potatoes, he said.

Bruer said she read recently that COVID-19 is not transferred onto food.

Besides, she said, “Potatoes are not intended to be eaten raw.”

Any bacteria that could be present would be destroyed by boiling, baking, microwaving or grilling, she said.

Lay’s Dill Pickle Chips are Back in Subway

Lay’s Dill Pickle Chips are coming back to Subway locations for a short time. Fans who spend USD15 or more...

Following years of research and development in conjunction with Lamb Weston, Sergio Herman from Frites Atelier is confident enough to...

It’s “very likely” Australia will face a potato shortage in coming months, the vice-president of horticulture at the Victorian Farmers’...