in Equipment in the field
Reading Time: 5 mins read
A A 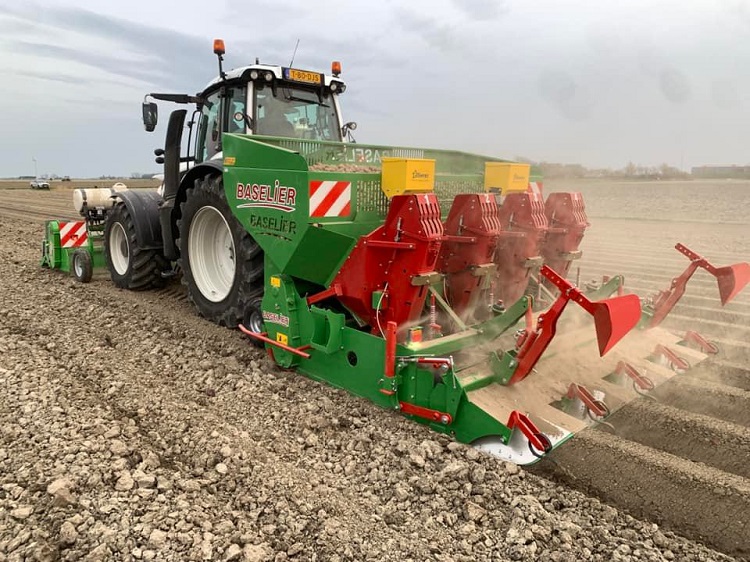 Haye Bruining from Wijnaldum (FR) is planting his 50 hectares of seed potatoes this spring with a new milling leg combination from Baselier. A sorting bunker with bottom unloader on a trailer has been constructed in collaboration with LMB Van der Laan to load the different seed varieties.

The elevator of an old AVR harvester has been added as an elevator belt. It can reach far and fills the planter quickly and conveniently. A job of poters that remains is also easy to turn back into the box.

Potatoes straight in the back

In the quest for more planting capacity and to replace a two-row belt planter, Bruining tested the Baselier cultivator-planter combination through dealer Mijno van Dijk last year . Compared to the planting he was used to, he immediately noticed that the tubers all came up straight in the back. Previously, he regularly adjusted this during milling.

Astrakhan farmer set up large-scale production of potatoes and onions

Most four row planters are trailed and you need wide headlands for that. Bruining likes to work with short headlands. Because the potato bunker is mounted inverted above the cultivator and the planting elements behind it, the center of gravity of this combination is relatively close to the tractor. This requires less force when lifting, but it also makes the combination shorter. This allows Bruining to drive all the way to the ditch and to realize short headlands.

“Because the seed bed preparation, planting and ridging take place in one pass, you retain as much moisture as possible in the ridge”. This argument has become increasingly important in recent years, Bruining notes, who is also satisfied with the quality of the back. “Nice 90 centimeters in circumference, good structure. You don’t have to go there anymore. With a row cultivator you smoothen and compact the ridges even more”. The tiller combination mainly runs on the nine front wheels (3×3) and the ridging hood. That is comparable to the pressure that a row cultivator gives. “The seed potatoes end up in undeveloped land, which means that there is loose, open soil around the tuber, which promotes rapid sprouting and further growth.”

The leg elements are made by Wifo especially for these Baselier combinations. According to Johannes de Best of Mijno van Dijk, these elements are distinguished by the spacious lifting channel, in which the more pointed tuber shapes also easily run through. The flattened bulge in the design of the leg spoons and a good width ensure good singulation, but also that the seed potatoes remain stable on the spoons during raising.

The planter combination plants at a speed of approximately 4 km per hour. At the bottom of the coulter is a pipe with three wear rings. As a result, the space at the bottom of the furrow does not taper off, but a wider and more convex underside is created, in which the seed potatoes are immediately fixed after dropping and do not roll. This promotes a regular planting distance. The pipes are easy to replace and also ensure that the leg coulter wears less and pulls a sharp furrow for longer.

Bruining has several plots at a distance and with the milling planter in combination with the bunker unloader with an elevator belt, he can quickly stock and move. Because the bunker of the planter is close to the cabin, the reach with the elevator belt is a handy find. The bunker with bottom unloader is returned to the sorting line after use.

Directly behind the sea dike at Franeker, the sea clay is about 20 to 30 percent on the plots of Bruining. This potato plot had wheat last year and a green manure fertilizer over the winter. It was recently cut with a disc harrow. In preparation for planting, an additional operation was then carried out with a rotary harrow to further mix the crop residues into the topsoil. The furrow was also pulled out 40 centimeters deep with the Paragrubber to remove compactions.

Because the top layer still contains the necessary clods, Bruining has picked up an extra cutter in the front linkage. This mills off the top layer by five centimeters and reduces the coarser clods. The Baselier then mills again to a depth of 12 centimeters. This provides sufficient loose soil for the ridge construction. The combination also runs nicely straight with the tiller in the front linkage. The tiller combination itself hangs rigidly behind the tractor.

Now, with 300 liters of water per hectare, a mix of Serenade and Mirador against scab and Rhizoctonia is sprayed over the tuber and over the seed soil that is immediately surrounding the tuber. APP is also included in the mix as a starting fertilizer. Three fine nozzles are installed per planting element.

From regenerative farming to healthy eating …

According to Delphy researcher Johan Wanders, the results confirm the positive image of the Loof Does; that have been identified in...

Astrakhan farmer set up large-scale production of potatoes and onions

From Dagestan to Novosibirsk - such is the geography of deliveries of the farmer from the Astrakhan region Stepan Timofeev....

Apply product when and where you need it at the optimum rate.From a rescue fungicide application to cover crop seeding,...

If anyone can tell us the tips and tricks of proper maintenance of a plow, it's him. Common thread: Rotating parts...

From regenerative farming to healthy eating ...