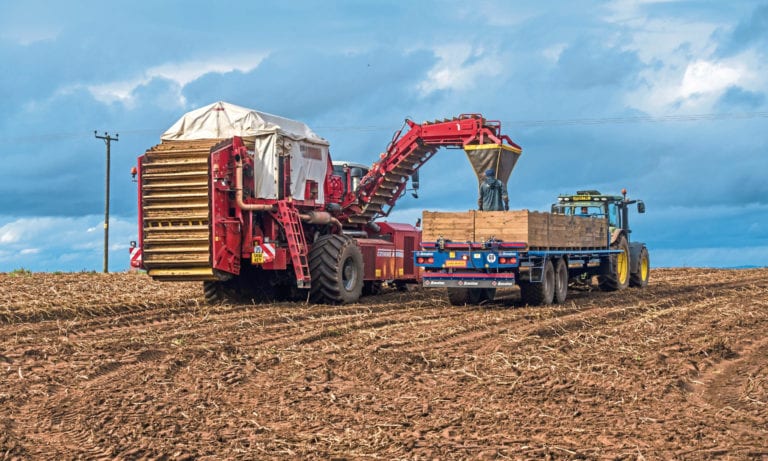 The race is on to get this year’s potato crop harvested as growers battle their way through drenched fields and muddy conditions.

The season has been one of extremes, with one grower describing potato farming this October as “drudgery”.

Fields were too dry at the start of the season with some growers irrigating crops because dry conditions meant potatoes getting bruised as they came through harvesters.

Growers are now facing the opposite problem – significant rainfall since the start of the month has left harvesters sitting idle in sheds or struggling in sticky fields.

Seed potato grower Jim Reid from Milton of Mathers near St Cyrus, who is the host of levy body AHDB’s strategic potato farm in Scotland, said the 2020 potato season had been one of two halves.

“The first half was dry, which could result in tuber bruising, although we haven’t seen any yet,” said Mr Reid.

“As well as severe wet weather at the start of October we had another 50mm of rain in our area last week.

We had harvested 165 tonnes of potatoes on October 18 but the excessive rain meant we had to delay for eight days.”

He said having to wait for land to drain before completing the potato harvest would have a knock-on effect on other operations on the farm.

“We have had to delay sowing winter wheat, which will of course mean a delayed harvest next year and probably a reduced crop yield,” added Mr Reid.

NFU Scotland potatoes chairman Peter Grewar, who grows potatoes in Perthshire and the Black Isle, said conditions in September and this month were on two completely different ends of the scale.

He said: “September was extremely positive for most in the potato sector with a lot of seed potatoes able to be lifted in the good weather.

“With October’s average rainfall of 93.6mm being almost reached within the first four days, it is easy to see how we can be set for the wettest October in 25 years. The only way to describe potato farming during this October is drudgery.”

She said: “With increased lockdown measures in many parts of GB the demand from processing and chipping – for fish and chip shops – is somewhat subdued.
“Lockdowns could potentially offer some support for packing markets, as seen in March, but panic buying is not really seen as yet.”

She said the loss of CIPC – a chemical used to prevent sprouting of potatoes in storage – could have an impact on prices later in the season.

Ms Bailey added: “There could be some support in prices towards the end of the season if growers have either moved potatoes out of storage early to avoid issues or faced major storage problems but this support will only be for potatoes that have held their quality.”