The Potato of Bologna PDO at Tramonto DiVino 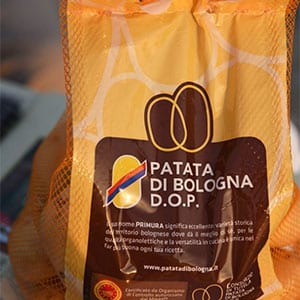 The Patata di Bologna PDO protagonist in Cesenatico interpreted by a great starred chef. Appointment on Friday 31 July in the first stage of Tramonto DiVino , the tour dedicated to PDO and PGI products from Emilia Romagna combined with the great regional wines offered by the sommeliers of Ais Emilia and Romagna.
In the Cesenatico overture, the Patata di Bologna PDO will be the protagonist of a four-handed cooking show with Alberto Faccani , 2 Michelin-star chef at the Magnolia restaurant in Cesenatico, together with Carla Brigliadori, head of the Casa Artusi cooking school in Forlimpopoli. The fil rouge of the evening is Artusi’s cuisine, a tribute to Pellegrino Artusi’s 200 years, father of Italian cuisine. The starred chef, in fact, will make the Artusian recipe n. 446 Potato pie with Bologna PDO potatoes, together with Pancetta Piacentina and Mussel from Romagna.
“For us this is an important showcase within an event that has been promoting regional certified products for fifteen years – says Davide Martelli, President of the Consortium for the Protection of Patata di Bologna PDO – La Patata di Bologna PDO for its peculiarities that make it unique, it is a product increasingly appreciated by great chefs, used in gourmet recipes but also in traditional popular cuisine dishes. The interpretation within an Artusi recipe does us honor, even more so in the context of the celebrations of Pellegrino Artusi’s 200 years ”.
The event will take place in the suggestive Piazza Spose dei Marinai in Cesenatico and within a few days it has already sold out.
Bologna Dop Potato Press Office

Potatoes and onions, the prices are demoralizing