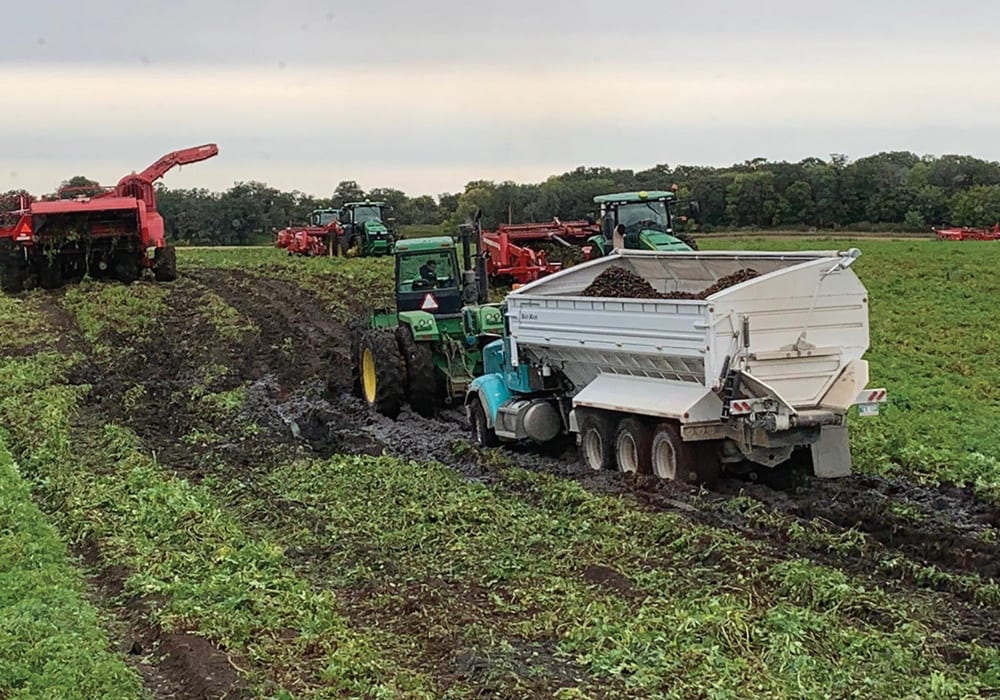 Manitoba won’t see the undug acres of 2018 and 2019, although many yields aren’t bursting any storages

Manitoba’s potato crop won’t be breaking yield records. Then again, at least the crop is off the field.

It has not been the case for the last two years. Producers were forced to abandon a significant portion of their crop in both 2018 and 2019 due to wet falls and damage from frost. Last year, the Keystone Potato Producers Association estimated that 12,000 acres went unharvested, up from 5,200 acres the previous year, and another 1,000 acres were dug with severe frost damage.

Why it matters: Potato yields are down, but producers also got a break from the harvest issues they’ve been fighting for the last two years.

Dan Sawatzky, manager of the Keystone Potato Producers Association, says 2020 yields have been mixed, although the harvest has also dodged those weather issues from last year.

“Some are close to what they were anticipating or expecting, but the majority of them will be short, will be down,” he said. “We had a late spring, a late start, and we had some heat during the early part of July as well as the third week of August that was just too hot for potatoes to continue with their development.”

Some yields may be down as much as 15 per cent, he estimated.

About 95 per cent of the province’s 70,000 potato acres were harvested as of Oct. 6, according to the weekly provincial crop report. Near the same time last year, the province was reporting only 40-60 per cent of commercial potato harvest complete in central Manitoba. That number then hit yet another wall when an early blizzard dropped up to 75 centimetres of snow in parts of the province over the Thanksgiving weekend.

This year, Sawatzky says the industry may have set speed records, even if yields have fallen shy.

“The weather was very, very good and (it was a) very efficient harvest,” he said.

Processing potato harvest was complete, to his knowledge, although some table potatoes may have still been in the ground as of the first week of October as producers waited for skin to set.

This year’s crop has dodged quality issues that initially had Sawatzky concerned. There have been no widespread reports of tuber size issues, despite worries that the late spring might cause a glut of smaller potatoes.

Gravity, however, may be lower than hoped, he added, something he also linked to the shorter growing season.

“Generally, I think they’ll store well,” he said. “They were put into storage in good shape.”

That in itself is a win over the last two years. In 2018 and 2019, large quantities of potatoes went into storage frost damaged or otherwise compromised from sitting in saturated soil. The sector reported widespread spoilage worries and producers fighting patches of rot in storage.

Last year, the potato sector had been expecting record yields prior to the weather issues.

“To have the yield down a bit this year certainly is disappointing,” Sawatzky said. “But to have them in the bin and not frozen in the ground in the field is quite a relief.”

Demand for processing potatoes turned volatile this year with the sudden hit of COVID-19 shutting restaurants and event centres such as stadiums.

This spring, both McCain Foods and J.R. Simplot, the province’s two main potato processors, said they would cut contracted acres. Manitoba potato growers reported contract cuts anywhere from nine to 16 per cent, depending on company.

It was a far cry from the supply situation producers had expected to be in. Following harvest challenges in 2018 and 2019, processors had been bringing in extra potatoes from Alberta and the United States to make up for the gap in harvest.

Those shipments stopped in March and April, thanks to impacts from COVID-19, Sawatzky said.

“One of the companies here was not sure that they would be able to use what was left in growers’ storages, the inventory that was left, and weren’t even sure how the growers would get paid,” he said. “They were encouraging growers to find other places to market these or dispose of them. It certainly was a huge concern.”

At the time, Manitoba actually hoped to fare better than other regions, since the hit to harvest also meant less surplus to worry about.

By the time tractors hit the field, however, some of that impact had rebounded.

“Those cuts weren’t as deep as anticipated,” Sawatzky said, noting about 1,500 extra acres of processing potatoes actually went in the ground.

“Which didn’t happen in other jurisdictions,” he noted.

While COVID-19 is still making for uncertainty in food-service demand, Sawatzky is not expecting the level of shutdowns seen earlier in the pandemic.

“Currently, the demand is strong,” he said.

Potato crops in eastern maritime states and Atlantic Canada are suffering from dry conditions, while U.S. states such as North Dakota, Idaho, Oregon and Washington are expecting a “reasonable” crop, Sawatzky said.

“There possibly will be a little bit of extra there as well to make up for the shortfall here, as well as the eastern part of the country,” he said.

A Sept. 18 report from the United Potato Growers of Canada estimated that Canadian production (including table potatoes) could fall short by at least six million hundredweight, driven largely by a 15 to 25 per cent yield drop in Prince Edward Island.

The group expects processing potato yields in Alberta and Manitoba to fall to their lowest levels since 2011.

“In addition, fryers were already playing catch-up to a market demand radically reduced by COVID-19 in the spring and then coming back sooner than expected this summer,” the report read. “Unfortunately, this occurred after raw product had moved to other channels and contracted volume for the 2020 crop was reduced across North America.”

It’s yet to be seen how those market conditions will impact the next round of contract negotiations.