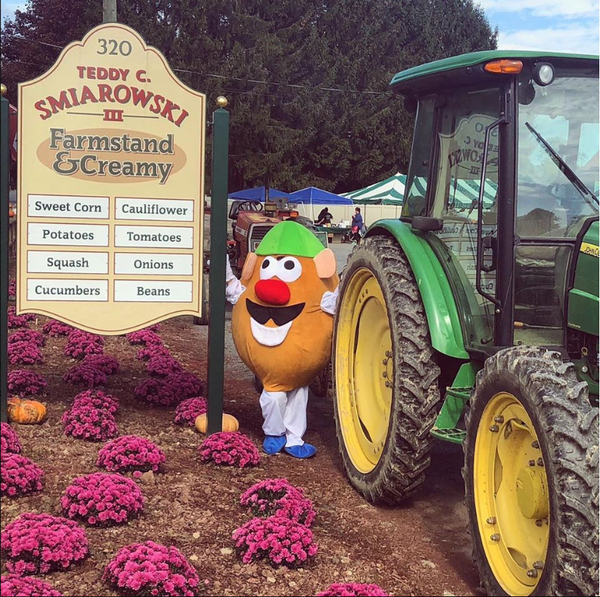 If you buy potatoes from the grocery store or get a side of fries when out to eat, there is a good chance you’ve tasted potatoes grown at Teddy C. Smiarowski Farm in Hatfield. With close to 700 acres producing potatoes, they raise 24-28 million pounds of russet, red, yellow and white potato varieties every year, and sell to most large chain stores and food service businesses all the way from Maine to Florida.

The farm was started by Teddy Smiarowski in 1950, when he got married and moved to Hatfield from his family’s dairy and vegetable farm in Montague. Teddy left the dairy industry and began to grow tobacco, cucumbers, potatoes and other vegetables. After Teddy’s passing in 1989, his sons Bernie, Ron, John and Jim took over operations of the farm.

In the first few years they focused on growing cucumbers for the pickling plant in South Deerfield, but they transitioned to growing potatoes in 2005.

Potatoes grow best in sandy soil with plenty of rainfall and cool temperatures, particularly at night. “This year was one of the driest on record — we were irrigating night and day,” says Bernie Smiarowski. While irrigation can save the crops, dry years add a serious burden to farms in the form of additional labor hours.

One blessing in a dry year is reduced pressure from late blight, the fungal disease that caused the Irish potato famine, which spreads quickly in cool, damp seasons and can decimate yields. In addition to weather impacts, potato crops are affected by pests including the Colorado potato beetle, an insect found throughout North America. Typically emerging in late spring as the potatoes are growing, the larvae and adults feed on the leaves and can cause the whole plant to die.

To protect against pests and diseases, the Smiarowskis use sprays, following integrated pest management (IPM) methods. The UMass Agricultural Extension provides an invaluable resource to farmers by recommending targeted sprays based on what diseases and pests have been found on farms each season. This allows the Smiarowskis to do the least amount of spraying possible, while still protecting their plants.

The season begins in April when they begin planting, which continues for about a month. After planting, they need to begin tending to the plants with fertilizer, and this year, additional irrigation. They begin harvesting early varieties, such as white potatoes, in late July and continue with other varieties until early November.

Before harvesting, a spray is used to kill off the leaves and vines of the potato plants. This stops growth and makes the skin of the potatoes tougher. Without taking this step, the potato skins would come off when the potatoes go through the washer and grater, making them harder to sell. For white varieties, it takes the potato skin 7-10 days to set after the plant matter dies before the potatoes are ready to be harvested. For the russets it takes two weeks, and for the red varieties it takes three to four weeks.

Harvesting the potatoes requires two different pieces of equipment, both pulled by tractors. The first is a windrower, a machine that pulls up four rows of potatoes from the ground, and places it on the next four rows, consolidating what would have been eight rows into four. This makes it so that the four-row harvester only has half as much work.

The harvester uses a conveyer to pick the potatoes up and dump them into a truck driving beside the harvester. From there, the potatoes are brought to be washed, grated and packaged either into five-pound bags sold to retailers or 50-pound boxes sold to food businesses and restaurants.

If you are interested in buying potatoes directly from Teddy C. Smiarowski farm, you can visit their farm stand at 487 Main St.in Hatfield.

To find more local farms near you, visit buylocalfood.org/farmguide.

Emma Gwyther is the development associate at Community Involved in Sustaining Agriculture.