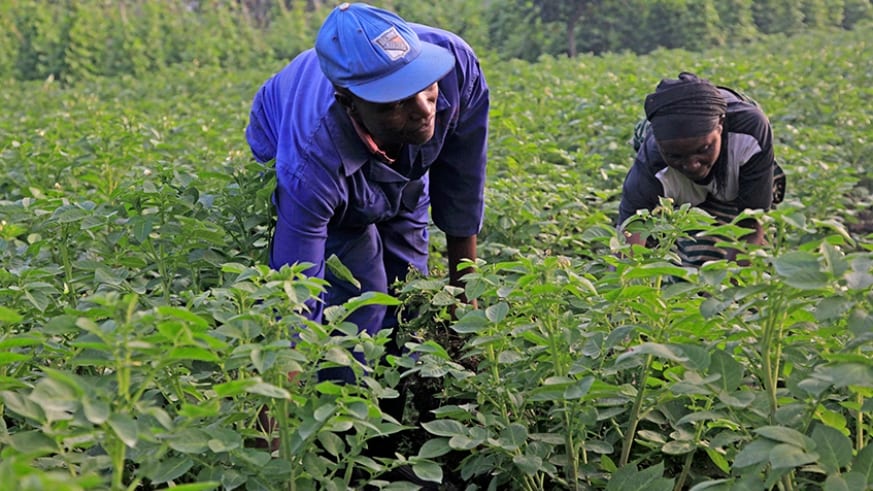 Farmers in Northern and Western provinces are still facing shortage of Irish Potato seeds and this worsened in the Agricultural Season A that was launched on September 15, 2020.

The Northern volcanic region accounts for more than 80% of national potato production and 60% of the production is used directly for home consumption in this region.

This means if the crop production is affected, it could cause shortage on the market, food insecurity and price hikes.

Moustafa Musabyimana, a farmer from Busasamana sector in Rubavu district told The New Times on Monday September 21, that they faced shortage of seeds due to many factors.

“In the previous season we faced a disease called “Sembeshyi” that devastated Irish potato crops and therefore it was not possible to practice ‘positive seed potato selection’ from the affected potatoes. This immediately caused shortage of seeds,” he said.

It is one of the solutions to solve the issue of seeds shortage but farmers say that this was not possible due to the disease that affected the mother plants.

The farmer added that the number of seeds multipliers and multipliers who are not professional worsened the shortage of seeds.

“There are still few seed multipliers who can’t satisfy quality seeds demand. Even those few are not professional. They register for operating but they do not work. Government should coordinate to increase the number of seed multipliers and train them. RAB should increase good varieties of potato seeds since some seeds are no longer effective,” he added.

You can join seed multipliers and spend three weeks without getting seeds. There is a shortage of seeds. Farmers who want seeds now can’t easily manage to get them, added Patrick Nshimiyimana, another farmer from Kinigi sector in Musanze district.

Nshimiyimana said that even when seeds multipliers produce seeds, they sell them at a high price which discourages farmers from using them.

He said seeds which farmers select on their own using “‘Positive seed potato selection’ were sold at between Rwf500 and Rwf600 while those from seeds multipliers are at Rwf800 and above.

He requested the government to subsidize Irish Potato seeds as other seeds.

“If the price is Rwf800 per one Kilogramme, a farmer prefers to buy affordable seed especially from quack seed multipliers who sell fake seeds- that doesn’t have good quality,” he said.

Elie Bahati from Nyaruguru district said that some farmers opted for planting beans because they can’t afford Irish Potato seeds.

Statistics from Rwanda Agricultural and Animal Resources Development Board (RAB) indicate that so far, potato farmers harvest an average of 16 tonnes per hectare yet they should be harvesting above 30 tonnes and the problem is largely attributed to the use of ineffective seeds among other factors.

Benjamin Iryumugabe, Tamira Station Manager said that big and small seed multipliers sell the seeds for consumption instead of giving to farmers for planting.

“Seed multipliers should have the spirit to serve farmers, something that will solve seed shortage,” he said.

Egide Gatari, the Agricultural Subsidies Programme Manager at RAB told The New Times that many discussions and meetings are going on to address the issue.

“Irish potato seeds are not subsidized but we are encouraging farmers to produce and store their own seeds to ensure they are always available and at an affordable price. Discussions are going on to solve this problem,” he said.

He said that RAB is building the value chain for seeds research and multiplication.

“There is a need for joint efforts between RAB, seed multipliers and local leaders to solve seeds shortage. Meanwhile farmers should select healthy seeds from their produce to grow in the next season,” he added.

Rwanda needs about 35,000 tons of quality potato seeds to cover 25 percent of total cultivated land in each growing season.

Rwanda produces 916,000 tonnes of Irish potatoes every year, making it the third most popular food crop produced in the country.

Potatoes cover 3.9 per cent of the total cultivated area.

The average productivity of potatoes is ten tonnes per hectare which is low as compared to yield potential.