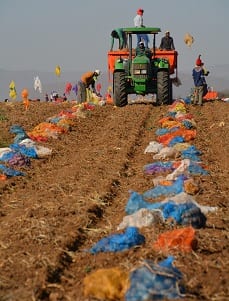 It has been a torrid year for the South African potato industry on the fresh produce markets with the sudden absence of the food service industry, usually the buyers of large potatoes which make up 20% of the potatoes on the market.

Restaurants had no sales for two months and restricted business from mid-June.

Quick service restaurants were allowed to resume trade from beginning May but some of them are only back to 50% of their pre-lockdown levels.

On the other hand, direct sales to retail boomed, as much as 40% year-on-year growth since April for some secondary retailers in informal settlements and townships.

Since June there have been signs of improving demand and an upward price trend started, contrary to other years, which culminated this week in going past R60 (3 euros) for a 10kg bag.

The Western Free State (Christiana) potato season is coming to an end, while the main season of Limpopo’s far northern producers are starting, and what’s happening on the market, traders say, is a classic case of low supply supporting high prices.

Some express concern at the possible development of consumer resistance, making reference to what happened with pineapples this year.

Related Topics:Torrid year for potatoes redeemed by very high prices
Up Next