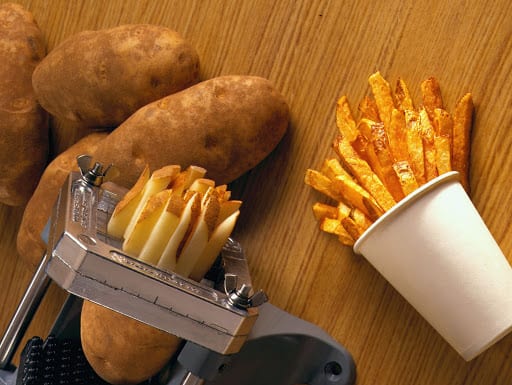 When many restaurants across the country were shut down in response to the coronavirus epidemic, potato sales both frozen and fresh took a hit. But consumers and operators both made adjustments. Concepts such as fast casuals that were already set up for takeout expanded those capabilities, and many other operators added takeout or curbside service.

Since consumers could no longer “go sit down in a restaurant as often as they had, they have pivoted to fast casual,” said Proia.

Fries, including fresh-cut fries, lend themselves well to takeout. “So the burger concept and the concepts that do hand-cut fries, their volumes are up,” he said. “That is in our favor as a company.”

The foodservice sector is “predominantly where our business lies,” he said. “Our key customers were able to figure out how to evolve quickly.” They changed their standard services and offerings, some to takeout only and some to a combination of dine in and takeout, with dine in seating “somewhere around 50 percent of capacity.”

In some places around the country “for these national chains, it is still takeout only,” Proia told The Produce News in late August. ”For others, it is a combination of the two.”

But by making and promoting those changes, “most concepts that have been able to do that are back to between 60-80 percent of what we would consider normal volume, and we are clicking along with 80 percent of our normal volume as well. We see that picking up week by week.”

At Kingston Fresh, “we have been able to play a major role as a supplier” for the USDA Farmers to Families food box program, Proia added. “We have been supplying potatoes and onions to a considerable number of [contract] award winners across the country, and that has helped fill the gap of the other 20 percent, so we are doing well through this whole restructuring.”

Kingston Fresh has been growing potatoes in Idaho since 1975 and now ships from major growing areas across the United States, assuring quality year-round supply.

As the 2020 harvest got under way, Kingston began packing new crop Idaho potatoes the second week of August. Before the end of the month, the company had finished the old crop and transitioned 100 percent to the new. “The rest of our sheds are ramping up one at a time” as the harvest continues.

Based on the early fields, the size profile seems to be leaning just a little toward medium and smaller sizes rather than large sizes, but “that’s not a bad thing” since most shoppers prefer those to the jumbos. However, “if the profile continues to look the way it does,” large-sized potatoes could be tight “late in the season next year,” he said.

“We’ve had a great crop so far,” Proia said. “If the weather holds, it will be a fantastic crop.”

With all the negatives the country has been going through, “it would be great to have a great Idaho potato crop this year. That will give us the supply we need to help rebuild the supply chain a little bit as things ramp back up,” he said.

Kingston has been in business nearly 50 years. “We’re a strong company. We’re going to be here for the long haul. Our customer service is second to none,” Proia said. One of the company’s mottos is “From Planting to Plate,” and “we mean that. We help to manage the product from seed selection all the way through until the consumer consumes that product either at home or in a restaurant.”

Related Topics:Kingston Fresh
Up Next