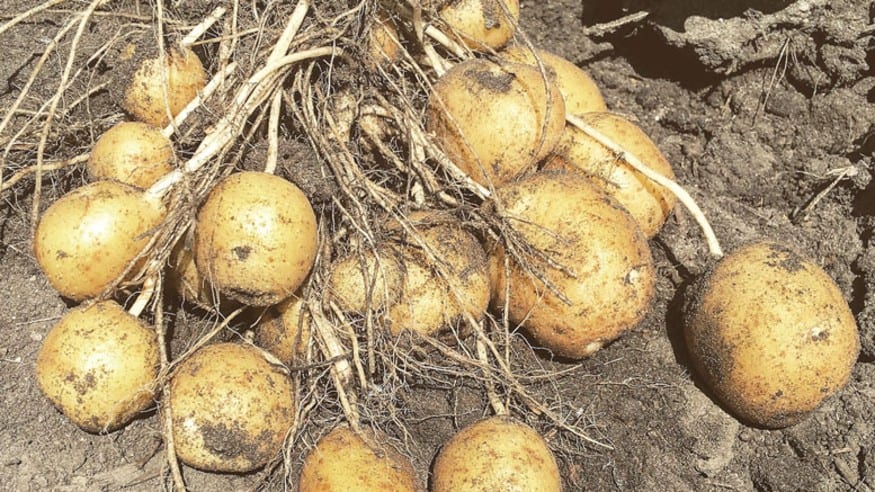 The outlook is good for high-quality crops of red and yellow potatoes from North Dakota and Minnesota.

Optimistic predictions for an excellent crop of consistent volume of Red River Valley potatoes is gratifying news for the multitude of buyers and consumers who look forward to these famous fresh spuds. This forecast is even more welcome following last season’s heavy losses in the Valley’s central and southern growing regions resulting from devastating weather in the fall, creating fewer promotional opportunities for retailers.

Although some heavy rains drowned out an estimated 10-15% of the crop in June, most shippers agree the ideal growing conditions through most of the season created increased yields that should compensate for the loss and provide a plentiful crop, which will be embraced by buyers throughout the 2020-21 shipping season.

Growers and shippers in the Red River Valley invite retail and foodservice buyers to compare their fresh potatoes to all others produced in any growing area of the country — insisting they are unparalleled in color, texture and taste.

At least one retailer in the Midwest is on board. Affiliated Foods Midwest, based in Norfolk, NE, supplies more than 800 stores in the 16-state Midwestern region. Jason Anderson, produce director for Affiliated Foods, says in addition to its freight advantage because of its location in the Upper Midwest, the Red River Valley provides other advantages. “We just really enjoy the color and clarity of the product. They hit the quality market we are looking for.”

The Red River Valley is the nation’s leading producer of red potatoes and has emerged as a leader in yellow potato production. With about 200 growers producing more than 40 million hundredweight (cwt) per year, an estimated 17% goes to the fresh market. The region is the third largest potato-producing area in the nation, according to the Northern Plains Potato Growers Association (NPPGA), based in East Grand Forks, MN.

“We just really enjoy the color and clarity of the product. They hit the quality market we are looking for.”

In the Red River Valley, yellow potato production increased four-fold during the past 10 years. Overall, yellow volume now comprises about 20% of the total, according to Ted Kreis, marketing and communications director for the NPPGA. “We can never lose sight of our identity as the nation’s leader in red potato production, but we certainly need to let it be known we are a great source for yellow potatoes, too.”

Dave Moquist, owner of O.C. Schulz & Sons, Crystal, ND, agrees. “The yellow demand continues to be kind of amazing,” he notes. “We have no issues moving our yellows, and the market remains fairly strong.” O.C. Schulz planted 30% of its crop in yellow potatoes this year. “We’re always looking for a new yellow variety that will extend our storage season through the winter.”

Yellow demand continues for Associated Potato Growers Inc. (APGI), Grand Forks, ND, reportedly the largest-volume shipper in the Red River Valley. And this season, the crop of both yellows and reds will be high quality, according to chief executive officer Mike Torgerson. “Although heavy rains early on caused some damage, ideal conditions after that produced better volume than average. We’ll be able to supply the market with plenty of both.”

Overall, Red River Valley potatoes still maintain the advantages of bright color, texture, and flavor, partly because the majority of their acreage is produced on dry land. “Our non-irrigated reds and yellows have higher solids than irrigated, so they are creamier and more full-flavored,” emphasizes Casey Folson, of Folson Farms, East Grand Forks, MN. “I’m a firm believer there are no potatoes with better flavor and texture than those grown in the Red River Valley.”

According to shippers, the buyers can also be assured these exceptional spuds will be offered in a wide variety of packaging options, which include brand-name and private labeling.

Offering packaging options of all sizes, Associated Potato Growers maintains additional quality standards, which helps the company stand apart from competition. APGI’s Torgerson says, “We are now 100% Harmonized GAP (Good Agricultural Practices) Certified.” He explains that all 17 of APGI’s growers and its three wash plants have completed this intensive and expensive process, which ranks at the top of all food safety compliance certifications.

“Stores, and consumers in general, want to have that traceability,” Torgerson reiterates. “We’re also Primus-certified, and we take pride in our product and the consistent quality we put in our packs.”

Aside from the traditional 3, 4, and 5-lb consumer bag options, NoKota Packers markets part of its crop through San Francisco-based Fresh Solutions Network LLC, which also offers a line of convenience, gourmet, and fresh-cut potato products. “Steamables are still very popular,” reports Carissa Olsen, chief executive officer of NoKota Packers. Packed in the ‘Side Delights’ label, “They are the best microwavable packs on the market.”

Standing apart from the competition can be maintained when companies continue to provide unwavering, high quality in a variety of packaging sizes that buyers can count on. Although Hoople, ND-based H&S FreshPak is in only its fourth season of operation, the young company is considered a well-established packer because of its affiliation with longtime potato grower-shippers J.G. Hall & Sons, Hoople, ND, and O.C. Schulz. “H&S has fit well into our systems,” emphasizes Andy Moquist, co-manager and salesman for H&S. “We all work well together to help move our product and provide the best service to our customers.”

Additionally he says several major packingshed upgrades at H&S since its opening, including the modernization of its potato storage units this season, have added to the efficiency of its distribution system. “Both of our families have been in the business since the 1950s,” adds H&S FreshPak’s T J Hall, co-manager and salesman. “We fit together very well. And we are only selling our own product, without outside growers, so we can control more consistent quality.”

Folson Farms maintains a similar philosophy. “We’re a family-owned company that manages our potatoes from the seed all the way to the semi-trailer,” says Casey Folson. “We have great continuity between our farm and the wash plant. We have more attention to detail, every step of the way.”

“Red River Valley potatoes are back,” adds NPPGA’s Ted Kreis, encouraging retailers to remind consumers of the arrival of these unique, colorful, and tasty treats. “Promote what your customers are looking for — Red River Valley Reds. And we have outstanding yellow potatoes, too!”

ASSOCIATED POTATO GROWERS INC., Grand Forks, ND — Mike Torgerson began his second season in September in the role of chief executive officer for the Red River Valley’s largest fresh potato packer. Torgerson was appointed at the beginning of last season after a transitional year following the retirement of longtime manager Paul Dolan. Torgerson had been with the company for 13 years and was a plant manager for APGI before assuming the chief executive officer role.

Another major change in the profile of APGI will occur at the sales desk when Greg Holtman retires January 1. Holtman has been with Associated since 1994. Prior to his sales career, he farmed with his family until 1986 and worked for Oslo Potato Packers.

H&S FRESHPAK, Hoople, ND — Building on a successful third year, H&S FreshPak begins its fourth season with an expanded and more modernized potato storage system. Partner and co-manager Andy Moquist reports a computerized airflow system was added to the facility that features “‘humidacell’ controls.” He explains, “Potatoes are 90 percent water, so the air can’t be too dry and needs to be maintained at a proper humidity for optimal storage. This will help enhance product quality and reduce shrink.”

The addition of a new packinghouse manager, Bernie Mullins, will also help increase efficiency at the wash plant, Moquist predicts. “Our demand has sometimes exceeded our supply,” reports Hall. “We have knowledgeable management in place that helps meet the needs of our increasing customer base.” Coleen Vincent is the office manager and adds to the efficiency with order preparation and bookkeeping.

NOKOTA PACKERS INC., Buxton, ND — The company commemorated a major milestone as well as completing a significant transition during the 2019-20 season. In addition to celebrating its 40th anniversary in business, NoKota Packers’ president retired.

Steve Tweten, a widely known industry veteran in the Red River Valley and through his involvement in industry activities nationwide, had been with NoKota since it opened its doors in 1979. Carissa Olsen now holds the title of chief executive officer and assumed that role when Tweten stepped down at the end of 2019. The transition began when Olsen was promoted to chief operating officer in 2017, and her duties began expanding as Tweten worked toward retirement.

The history of the company began 40 years ago when potato growers Malcom Tweten and brother-in-law Maurice Gjelsness decided they wanted to market their own crop. Together with their sons, Steve Tweten and Ron Gjelsness, NoKota Packers began to take shape. During its first season in the fall of 1979, the company represented 4 local farming operations, and shipped 220,000 hundredweight (cwt.) of potatoes, with 18 employees.

Today, the company has the ability to ship more than 600,000 cwt. of potatoes annually, with a staff of around 35 employed throughout the year.

NORTHERN PLAINS POTATO GROWERS ASSOCIATION (NPPGA), East Grand Forks, MN — The organization, which represents more than 200 growers in the Red River Valley of North Dakota and Minnesota, has made many alterations to its marketing plan in light of all the cancelled events caused by the pandemic. According to Ted Kreis, NPPGA marketing and communications director, “Six trade shows or other events that were budgeted have already been cancelled, and two more upcoming events are seriously threatened.”

“Dollars used to fund those events will now go to additional trade publication advertising, a rebuild of the NPPGA website and the production of a promotional video,” Kreis reports. The video “will show Red River Valley potatoes from planting, to harvest, through the distribution process.”

“We have a lot of added costs because of COVID,” reports Mike Torgerson, chief executive at Associated Potato Growers. The company operates packing facilities in three locations in the Red River Valley. “We take the employees’ temperatures daily, and we provide protective masks and gloves.”

In addition to owning O.C. Schulz & Sons, Dave Moquist is also a partner in H&S FreshPak, based near Hoople, ND. “We started implementing additional measures at both wash plants when COVID started peaking last spring and we were still finishing last year’s crop,” he reports. “We can’t complain too much. North Dakota has been relatively free of COVID in the rural areas,” he adds, speaking from his office situated in a northeast rural region of the state. “No one who works for us has come down with it yet—even on the farms.”

Another bright spot for the Red River Valley was an increase in retail business in the spring, which helped move more volume during strong market prices. “We couldn’t get potatoes to the retail buyers fast enough,” remembers Moquist. “People were eating at home a lot more, and they were realizing more the great value and versatility of potatoes.” O.C. Schulz and H&S FreshPak were fortunate to still have potatoes in storage through May when market prices were strong.