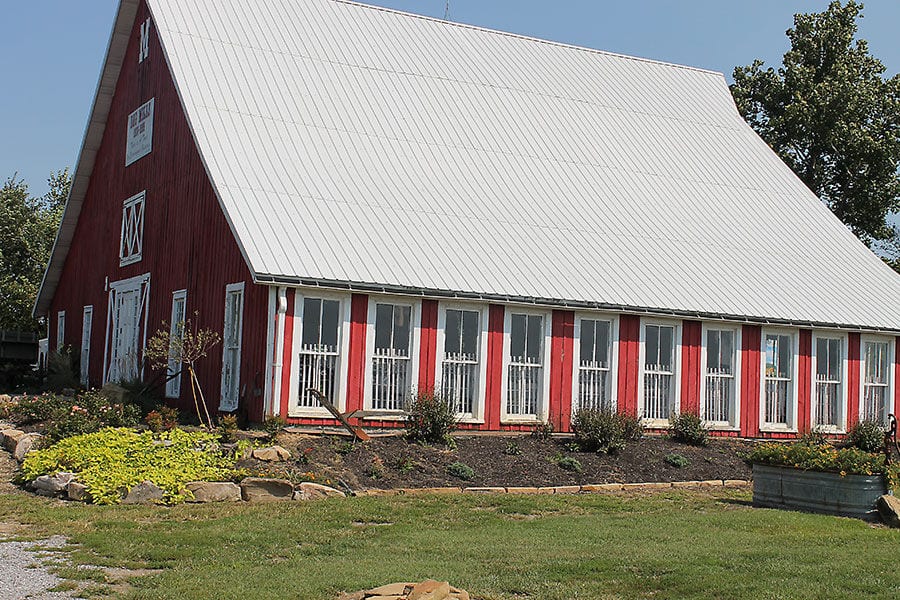 It’s easy to understand why Higher Ground, a banquet destination sitting among the hills of White County in southern Illinois, is such a busy place, even in the middle of a pandemic. Owner Pam McKinney has the heart and hands to make it special.

The focal point of Higher Ground is a

gable-style barn equipped with a full kitchen, dining rooms and even an upstairs chapel. The draw is all of the above, including McKinney’s homestyle cooking.

She found her way around the kitchen while spending much of her childhood in her grandmother Madeline’s house, where she now lives. But it wasn’t so much her grandmother teaching her how to make tasty dishes. Instead, it was her hands-off approach.

“By the time I came along she was tired of cooking,” McKinney said. “She was patient. I was here most of the time. She turned me loose in the kitchen.”

She believes that cooking is as much art as science.

“The secret to being a good cook is your taste buds,” she said. “Your taste buds will tell you whether something is good.”

Indeed, McKinney is comfortable with comfort food. She prefers cooking from scratch, and it shows in her homemade rolls, dumplings and pastries. They include scrumptious cinnamon rolls with a creamy glaze.

“I had a maternal grandmother who made the best dumplings in the world,” she said.

The before-and-after photos of the barn attest to the amazing transformation of the building, which was moved in the early 1900s.

“My grandmother lived in an old log house close to the well,” McKinney said. “I don’t know where he got it, but her dad had $1,000 worth of gold dug up from under a horse trough, and told her to build her dream house.”

There was one problem: It would be downwind from the existing barn, and her summer kitchen would be the destination of unpleasant animal smells. So the resourceful family — with help from some neighbors — moved the barn to the east, using logs and teams of horses. The house was built on the spot where the barn once stood.

Now it is a venue for destination weddings. This is not Mc-

Kinney’s first rodeo. She had a restaurant in Fairfield for several years while working full time for the Illinois Department of Agriculture as a meat inspector.

“Then this place was falling down and I couldn’t spread myself any thinner,” she said. “I couldn’t quit my day job so I did Friday night, Saturday and lunch.”

She later retired from the state job, sold the restaurant and devoted her time to being a professional hostess.

The barn has been beautifully restored, retaining its original charm while providing the modern spaces and conveniences required by celebrants. While weddings make up a major part of its use, it also hosts showers, birthday parties, reunions and other functions

“There are people here almost all the time,” Doug said.

The chapel in the barn loft is fitted with restored pews obtained from a Presbyterian church that closed. They were cut and resized to fit into the space.

One asset that didn’t need to be improved upon is the scenic view from the place on a hill. One can see for miles across the rolling hills of deep southern Illinois. The house’s roof deck offers scenic views of the surrounding land. One spectacular feature is a large window that once was once part of the Capitol Building in Springfield.

Though it’s not considered a bed and breakfast, visitors — including members of wedding parties and deer hunters — sometimes spend the night in the home.

During the growing season Doug splits his time between here and working his farm in central Illinois. He is always happy to be in southern Illinois, with his talented wife.

“She loves to entertain. She loves to feed people,” he said. “Her gold mine isn’t made out of dollars. It’s making sure people leave here happy.”