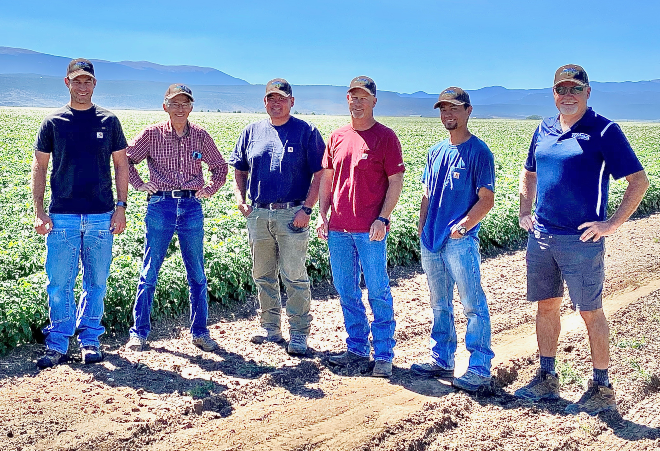 LeRoy Salazar not only has plenty of experience growing potatoes, he has the rather unique experience — at least among American farmers — of having grown potatoes where they originated: the highlands of Peru. In the late 1970s, Salazar (above picture, second from left) worked as a researcher and Extension specialist at Colorado State University. During his tenure, he spent two years working in Peru near the International Potato Center. When he returned home to the San Luis Valley, he brought with him that expertise and well as affinity for an ancient grain that’s become trendy in the U.S. in recent years: quinoa.

Salazar is a fifth-generation family farmer in the Valley, but said his family’s roots in the Southwest go back centuries. He talked with Spudman about growing potatoes at a high elevation and forming a partnership with two other San Luis Valley seed farms to increase healthy seed for the region and the rest of the U.S.

How long has your family been farming?

LeRoy Salazar: We go back 12 generations in the U.S. My ancestors came to New Mexico when it was still pretty wild country. They moved to the Valley in the mid-1800s. As far as I know, they’ve been growing potatoes ever since, but on smaller plots. When I was a kid, we grew just a few acres of potatoes. As potato farming got a little bit bigger, we stepped out for a little while. We felt that our isolation in the San Luis Valley — we’re far away from any other potato-growing area — was ideal for a seed potato operation. So, we started growing seed in the late 1980s. Before that, we only had a few commercial potatoes. We got to the point where we couldn’t supply our customers because of high demand.

That’s why you formed the San Acacio Seed partnership in 2016 with Three S Ranch and Price Farms. How does your farm fit in?

My farm, Salazar Farms, or Argo Engineering, provides the Field Generation 1, 2 and 3 seed to a number of entities in the San Luis Valley and around the country. We provide the Gen 3 seed to San Acacio Seed, which is our partnership farm and is owned by three entities — Salazar Farms, Price Farms and Three S Ranch. We grow a number of different varieties, and we like to try new varieties. We just try to keep up with technology and anything our customers might want. We grow a number of different red, yellow and russet varieties on the farms.

You are very isolated. How far away from the nearest potato farm are you?

I’m about 20 miles away from the nearest potato farm. They’re upwind also. We usually get our wind from the southwest. There are many, many miles into New Mexico where there aren’t potatoes.

Do you only sell seed in the San Luis Valley?

We sell all the way up into Washington state and the Northwest, as well as California, into New Mexico, Texas and Arizona. We’ve sent seed as far away as Florida.

How many acres do you grow potatoes and what is your rotation cycle like?

The acreage we grow on this farm is generally around 400 acres of seed. Our rotation is typically potatoes, barley and soil health crops, such as sorghum or something to keep our soils as healthy as possible. Every few cycles we turn fields into alfalfa fields for a period of about five years. That way we end up with a good healthy rotation that keeps our soils and our crops healthy. If you think about our farm, it’s potatoes, barley, a little bit of quinoa, some soil health crops and some alfalfa.

Have you always grown quinoa?

We grew quinoa many years ago, but the market was not very good at that time. We started growing it again about three years ago. It’s a health food and it’s becoming more and more popular. It’s a crop that requires very little water and not as many inputs as other crops. It works out for us, on a limited acreage. It’s a good crop for the Valley. We’re at a high altitude, so it makes sense that we’d be able to grow that crop. It’s similar, in a lot of ways, other than latitude, to where they grow it in South America.

What turned you on to quinoa?

When I was working for (Colorado State University) as a researcher and Extension person, I worked for two years in South America and got to work with a lot of the potatoes up near the International Potato Center, up in the highlands. We got to experiment with a lot of different varieties of potatoes and different types of tuber crops, as well as some of the Andean crops, such as quinoa. We fell in love with quinoa because it’s really versatile. In Peru, we learned that you can make it into different kinds of stir fry, you can put it in stews and it’s actually really good as a dessert. You can make desserts that are like a rice pudding that are really highly nutritious. We’ve had that as part of our diet since we came back from Peru in 1980.

What’s it like to grow potatoes at a high elevation, like you have in the San Luis Valley?

We’re at 7,700 feet. We have cool nights and warm days, but not really warm. We have a short growing season. This climate is really ideal. We don’t have as many disease issues. We’ve had very few cases of late blight, whereas other areas can struggle with that, but we do not. Because of our cold winters — and it does get cold — our soils are healthier because we don’t end up developing the huge nematode problems and some of the problems other areas tend to have. So, our climate is really good for potatoes and especially seed potatoes. I think our summers are similar to South America where I was working at 11,000 feet. They can grow them for a longer season because they’re closer to the equator, but it is fairly similar.

Sometimes, we have 90 frost-free days or less. We have to have fairly fast-growing varieties if we’re going to be successful in potato farming. It’s usually starts between April 25 and May 10 — those are the ideal planting times — and then harvest is around Oct. 6 or 10. At that point, there is a good chance we’re going to get a significant frost.

If you look at yellow varieties, our favorite right now is the Soraya because it’s very water efficient, nutrient efficient and it is pretty disease resistant. It grows fast and has good yields. We’ve looking for a really good red. We grow Modocs and a little bit of Ciklamen and a little Mozart, but we’re still looking for that really good red potato that will keep its color in storage and that has other good storage characteristics, good dormancy and that sort of thing. Right now, the popular ones for us to sell are Modoc and Ciklamen. The Modoc has a really nice color and it holds in storage pretty well and we get pretty decent yields, but the issue with it is that it’s a weak plant. You get a hail storm or something like that and then you’ve got some issues. It’s just not as vigorous as, say, the Soraya.

There are so many russet varieties here in the San Luis Valley, some of them are from our own research center. But it continues to be that the Norkotahs for the fresh market people really like. We have four good Norkotahs varieties that we grow that have a lot of demand, two are Colorado varieties, which are the Colorado 3 and the Colorado 8, and the two Texas varieties are really popular, which are the Texas 278 and the 296.

There is a new one out of Texas that is really gaining popularity here and that’s the Reveille. It has really good yields and it’s early enough. One of its drawbacks, it seems like, is it’s takes a while to set its skins, so it takes a little longer season to get those good yields, but it’s a good variety. We’re also looking for a really fast-growing, 90-day russet that has a good yield and sets a good skin and stores well. I guess we’re all looking for that magic variety. (Laughs). You know, one that is water efficient, nutrient efficient and that is just a perfect potato, but that’s a continual search.