in crop protection, News
Reading Time: 5 mins read
A A 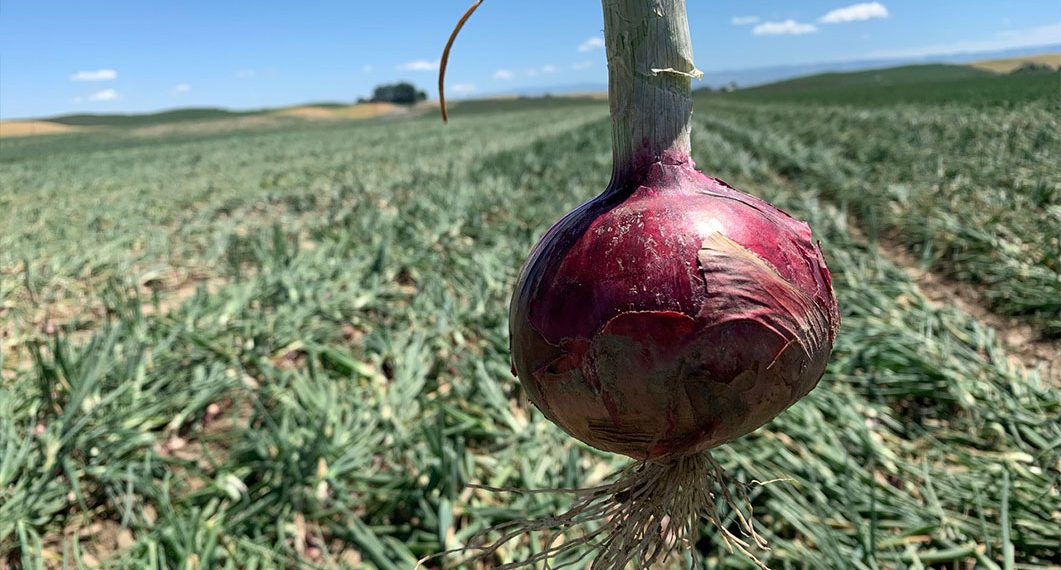 MARKET
Walla Walla:
Michael Locati with Locati Farms and Pacific Agra Farms told us he started shipping last week. “We’re going full speed, and volume is good,” he said on June 29. Michael said he would start harvesting the Rosé Walla Walla Sweets on June 30 and start shipping them early next week. “It’s going well,” he said. “It was a little wet at first with the rain we’d been getting, but it’s dried out now, and things are going well. We’ll start harvesting our Rosés tomorrow.” Michael said size is trending to jumbo, and he added, “There’s a good mix. It just depends on the field.” He expects the deal to run through late August and possibly into early September this year. Most of his Walla Walla Sweets shipped primarily to a local/regional market, he said. On transportation, Michael noted, “I haven’t heard any complaints about getting trucks, so knock on wood.” He also said labor has been OK thus far, commenting, “We have a good crew now for what we need to do each day.” Our thanks to Michael for the photos of beautiful Rosé Walla Walla Sweets.

Bakersfield/New Mexico:
Trent Faulkner with L&M Cos. in Raleigh, NC, reported in on June 29. “In Bakersfield, we had about a week gap on yellows, and that should end tomorrow,” he said. “The overall gap on yellows in California and some light rains in New Mexico made for a quick market spike on yellows. We did have reds throughout the week out of California, and the gap on yellows should end tomorrow or Friday. Then we will be shipping all three colors through July 19 or 20 out of California” Trent continued, “Quality has been absolutely excellent, and demand has been insane. About last Tuesday or Wednesday when buyers figured out there wasn’t going to be much availability on yellows, demand started blowing up. But the light rains in New Mexico kept us out of the fields, so we weren’t able to bring onions into the drying room and we needed to cover contracts with what we had – so there was some missed opportunity on some high pricing there.” He added, “We didn’t receive a lot of rain, so there was no effect on onion quality. We just didn’t want to bring in the onion dirty.” Trend said, “We should be able to start our New Mexico Billy the Kid packing next Tuesday, possibly on Monday. We’re not sure how long the hot market is going to hold on the yellows, but we hope we can take advantage of some of it.” On transportation, Trent said there have been no complaints. “Really, it’s been better than last year, even with the fuel hikes,” he said. “Last year we would get a quote and the actual price would end up being higher. At least this year the quote is what it is, and there is good availability of trucks, so we don’t have any complaints.”

California/New Mexico/Arizona/Mexico:
Rick Greener with Greener Produce in Ketchum, ID, told us on June 29 that orders should be made today. “We are currently shipping out of California, New Mexico, Arizona, and a few are trickling out of Mexico through South Texas,” Rick said. “I have some Mexican jumbo whites and jumbo yellows loading out of South Texas today and tomorrow, but they are spicy and pricey!” He went on to say, “Availability has been rough for about the last 10 days. If you’re planning to order you should be ordering NOW, or yesterday. There has been a gap, and shippers are doing what they can to cover contracts, so everyone is sold out for the week. You might be able to get a load from someone you normally work with, but that’s a big maybe. There just aren’t any onions to be had out there this week. Consequently, the market has spiked, and it’s strong across the board.” On transportation, Rick said it’s been good. “Even with the increased fuel prices, freight hasn’t been bad,” he said. “We can get the trucks, and everyone is cool with the prices. I don’t know how long these guys can stay in business with these fuel prices, but for now, transportation is running smoothly.”

Southwest/West/Northwest:
Chris Woo, who keeps his ear to the ground on onion movement across the country, told us on June 29 his connections are reporting intermittent rain showers continuing in New Mexico, where the monsoon season started early, and some gapping in California. He said, “Overall onion demand is quite decent, and pricing is steady to somewhat bullish in all areas.” Chris added, “Onion buyers are looking for product, which is a very good sign.” In the Northwest, he said, “Washington State soon to start overwinters,” and Walla Walla Sweets are now shipping. “We’re still getting crossings from Mexico, and Vidalias are still shipping out of Georgia.” And Chris said, “Have a great and safe Fourth of July celebrating our nation’s Independence Day with fireworks invented by my relatives. Hope to see you all next week in Boise at the National Onion Association Convention.”

New Mexico:
James Johnson with Carzalia Valley Produce in Columbus told us on June 29 that rain continues in his area.  He said, “Monsoon is pretty steady here, with a 15 to 20 percent chance of rain daily. It has brought our temperatures way down though.” James continued, “Lots of people are in a gap now as they’ve finished up the short days and have not started transplants yet.” And he said, “I’m hearing some rumbling about how the intermediate crop may be smaller than average.”

Organics:
Brad Sumner with Pacific Coast Trading in Portland reported to us on June 29, saying his company is shipping out of Bakersfield this week. He said, “Demand is high, especially since it’s a pre-holiday week.  Everybody is looking for mediums, especially yellow mediums.” And, Brad noted, “The market is steady and good, with little spikes on short items.” He continued, “There are no quality issues that I have seen, or customer complaints for that matter.” Regarding transportation, Brad said, “Our sales are local mostly with some FOBs.  I know trucks are expensive, but all our orders are getting picked up.” Looking ahead at supplies, Brad added, “California will stretch into and through August and then we hit the earlies in the Northwest.”

CROP
Washington:
Trent Faulkner with L&M Cos. in Raleigh, NC, reported in on June 29 to say, “The reports we are getting on our Warden deal are all very good. Luckily, we’ve had a little better early growing weather than Idaho, and the crop is coming along really nicely. We expect to have onions ready to go mid- to late August this season.”

Idaho-E. Oregon:
Chris Woo told us on June 29, “Here in Idaho weather has turned warmer and dry, conducive for onion growing. The 2022 start-up will be around mid-August, which is a tad later than normal.” He added, “The crop is presently growing nicely and looks good so far, with no issues to report.”