“Less risks and good returns for the grower” 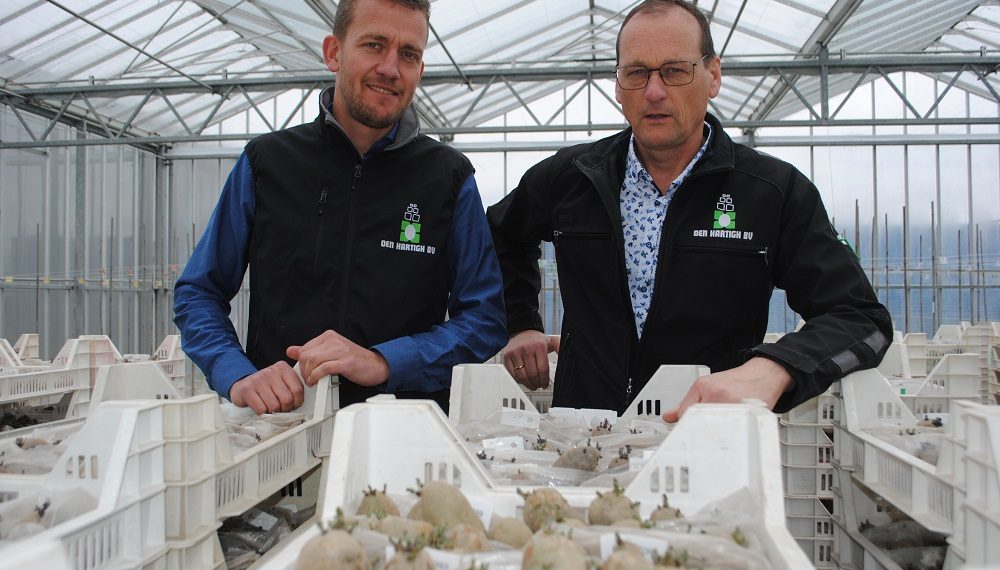 Varieties in the market that reduce the risks in cultivation and achieve a good return. This is the most important objective at potato trading house Den Hartigh BV from Emmeloord. With more than twenty varieties on the variety list and cultivation and logistics in and to about fifty countries, the success of the own breeding company is paid for. In addition to growth brilliance such as Prada, Gaya, Edison and Connect, King Russet has been embraced by the market since its introduction in 2018. And it has even more potential. No reason to rest on laurels. “Crossing in resistances remains a challenge. We are looking for varieties that are more or less vandal-proof.”

The breeding company is the lifeline for Den Hartigh. This is where the varieties come from that more than a hundred committed growers enjoy growing. Varieties that offer a solution for growers in view of the many challenges that lie ahead. “The art of breeding is to find a solution now to the problems in ten to fifteen years’ time. This quest is getting more and more difficult, because the changes follow each other in rapid succession. For example, who would have expected that the use of fertilizer and chemicals would be phased out more and more?”, explains director Bernard Krijger van Den Hartigh.

The origin of Den Hartigh lies in Broek op Langedijk. Since its foundation in 1936, the company has been engaged in the export and trade of fruit and vegetables. More than fifty years ago, the focus was on the breeding and trade of seed potatoes. The IJsselmeerpolders breeding and selection company was established in 1975 with the aim of developing potato varieties with resistances. “In those years, potato fatigue was quite an important topic for export. We also had a free-race pool back then, but we’ve started to focus more and more on monopoly varieties. So the protected species from our breeding company. We now only have our own varieties.” The current branch in Emmeloord was built in 2001 from Espel.

AM and Phytophthora resistance

Due to the long-term positive results of the varieties with AM and Phytophthora resistance, more and more growers turned to Den Hartigh. “You also cover a certain risk,” explains Matthijs Kloek, production and logistics manager at Den Hartigh. “If you see how much of the harvest in 2019 and 2020, real virus years, has been degraded and rejected, it shows that there is still quite a challenge.” According to Kloek, the grower has a lot to do with it.

“There are significant cost increases going on. From a geopolitical point of view, the fact that the United Kingdom remains closed is a major downer. We can trade with all over the world except our neighbor. The war in Ukraine also has a major effect on the grower. Apart from the fact that you miss a market or that it changes, this causes a higher price of fertilizer production, crop protection and energy. How do you keep the cultivation profitable?”.

Bernard Krijger: “The trend closer to home is also that the prices of products in the luxury segment, such as organic potatoes, are under pressure. I have my doubts that the rise of local-for-local will continue. Now that the corona time is hopefully approaching the end, you can see that consumers are opting for volume products again. The costs for reliable, good products have to be paid somewhere.”

Demand from exports is shifting towards robust varieties: a low input of chemicals and water. “Salinization is a global topic.” A good yield for the grower is, as far as Krijger is concerned, the most important trend that the cultivation system has to respond to. “The task for our growers is to look for a strong variety that can take a beating.”

Consumers are increasingly looking for convenience. Potatoes in the oven and five minutes later the meal is ready. King Russet is a potato that fits. “This variety was actually developed in collaboration with the chip factory. They were looking for a long white-fleshed potato, with good skin and strong against scab. After four or five years of selection, we already saw good baking properties emerge.

King Russet has ABCDE resistance and is resistant to free-living nematodes. The breed is strong on scab. So King Russet also gives a good yield on sandy soils, where cultivation for the French fries industry is done. The potato is easily lengthened and has nice white flesh.” According to Kloek, the seed potato cultivation of King Russet is a challenge. “But with cultivation measures, Talent or ethylene, you can still realize a good plus. Tuber number is also reliable. He grows easily.

The aim is cultivation optimization

The focus on cultivation work is cultivation optimization at Den Hartigh. This also includes intensive supervision. Also on the plot. “I think it’s quite special that we do the trial lifting and processing ourselves. We want to get a feel for it and see what is happening in the field,” says Matthijs Kloek. He emphasizes that the craftsmanship of the grower is the basis and that the best choices are then made in terms of sales.

“Ultimately, we want potato cultivation with minimal risks and good returns.” When improving the guidance, Den Hartigh is still considering the use of satellite images, for example, to provide the grower with tools for the optimal leaf kill moment, for example. Planting distance and optimal fertilization are also goals that can be monitored in this way.

Ultimately, the ambition is to grow by five to ten percent per year. The growth is mainly in the seed potato area and license income. At Den Hartigh, however, the approach remains to breed optimal varieties with traditional breeding. The trading house is not concerned with hybrid seed. CRISPR-cas is also a topic that is being held back. “Of course we are also working on diploid crosses, but we are convinced that we can grow sufficiently robust varieties with traditional breeding.”

This is an article from the Akkerbouwkrant.

Save energy costs in potato storage with a CO2 extractor

Almost 3,320 hectares have been allotted for potatoes this year in the Gomel region

Belgian real-estate developer Ion was looking for sustainable heating alternatives for a new residential area in the city of Veurne...

Tong Engineering is looking forward to returning to the NEC Birmingham on 4th & 5th May 2022, to exhibit once...

Almost 3,320 hectares have been allotted for potatoes this year in the Gomel region