in Company history
Reading Time: 9 mins read
A A 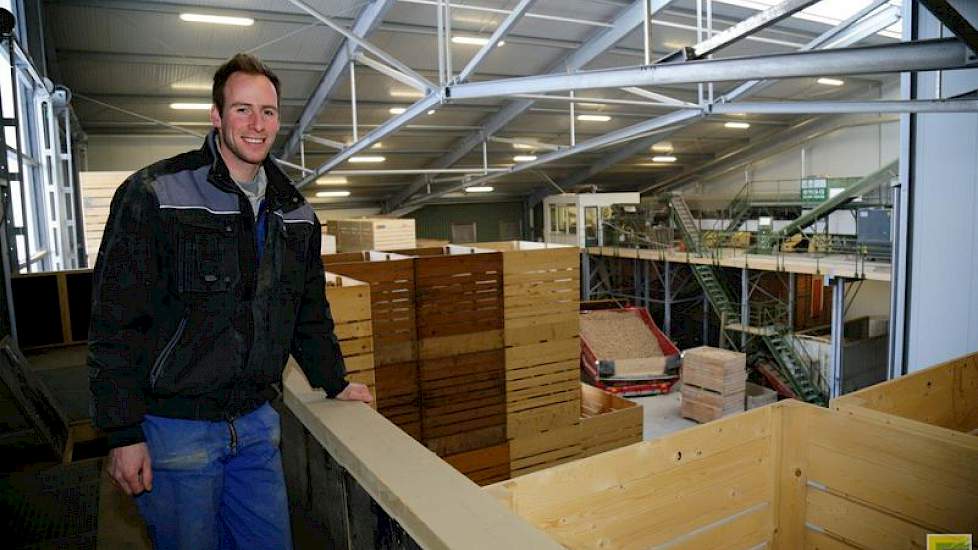 Gerald Maters (26) from Niekerk (De Marne), brand new chairman of the Gronings Agrarische Youth Contact (GrAJK) was elected 5 years ago. Due to the cold, wet spring, the machines cannot go on land. A consequence of El Niño, the warming of the seawater that makes Africa dry and the Netherlands too wet.

Waiting for a nice dry period

,,We were predicted to have a cold and wet spring and that prediction has come true.” The seed potatoes stay longer in the storage room. “We have to bridge a month this year. By cooling for longer, we prevent the seed potatoes from germinating.” Gerald peers over the fields behind the house. The sun is shining brightly. He and his brother have long wanted to go. And even though the fields drain the rainwater quickly due to their convex structure, they do not yet dare to enter the land. First of all we have to wait for a nice dry period.

Brother Arjan kills time in the shed by making the equipment and the large equipment pico bello. The dog Zimba thinks everything is okay. Whether it’s dry or raining, he follows the boss closely. A farmer is always dependent on the weather, a dog on his master.

For years, Gerald Maters has been combining work on the arable farm with administrative activities. After three years of chairmanship at AJK Hogeland, he takes over the chairmanship of the provincial organization. The partnership of Gerald and Arjan Maters cultivates 170 hectares of arable land, of which 40 hectares are leased. The company uses 75 hectares for its main product cultivation potatoes and 25 hectares for sugar beet.

Seed cultivation also takes place for Japanese oats (green manure) and winter barley and winter wheat are grown. Some of the grain, which is mold-free and rich in proteins, is currently processed at Koopmans Meel in Leeuwarden. It concerns a project of the factory to purchase more grains from the North.

It is a step of mainly talking with administrators, influencing decision-makers in politics and other administrative bodies such as water boards. But also binding work between arable farmers and cattle ranchers, both affiliated with the provincial organization that has approximately four hundred members.

Sometimes the effect of government policy is very concrete and close by. He points Maters to the ceiling of one of his storage rooms. “That is two boxes lower than the average in the Netherlands. Until two years ago, the municipality of De Marne refused to allow higher storage sheds. They have now become more flexible.”

If not, Maters would not only be involved as a farmer but also as a director of GrAJK. After all: fewer boxes means higher housing costs per square meter than its competitor elsewhere in the country. It’s called distortion of competition. Cost control is important in a world where global market prices fluctuate.

“A cent more or less saves companies like ours easily 25,000 euros.” For the course of this year, Maters is looking somewhat concerned at the current low oil price. “That’s nice at the pump, but the lower income of oil-exporting countries means they may have less money to buy seed potatoes.”

As a ‘meeting farmer’, Maters will mainly focus on closer cooperation between arable farmers and dairy farmers. Both are struggling with land hunger, which is already pushing up prices per hectare to sometimes above 55,000 euros, he points out. “We are in each other’s way.” The arable farmer is looking for economies of scale to improve the return on his equipment and other investments. That means more land to make the necessary crop rotation – each field may only be used for potato cultivation once every three years.

At the same time, arable farmers are diligently looking for a solution to counteract the decline in soil health. Livestock farmers mainly look for land to get rid of their abundance of manure. With the release of the milk quota, many farmers have purchased more dairy cattle. Disposing of the manure in arable farming is one of the options for reducing stocks.

Buying land or transporting manure to manure processors or abroad is expensive. Especially now that the milk price is under so much pressure. A truck arrives. Comes to pick up seed potatoes. Storage and delivery on demand is one of the brothers’ side earnings. Maters leads the way to the refrigerated storage. “Do you smell it?” he asks once inside. ,,Talent. Is made from caraway seed oil.” The substance, which is atomized in the storage, inhibits germination and ultimately gives the potato more runners, which means a higher yield for a grower. Maters supplies seed potatoes all year round. “There are warm countries where they can harvest twice a year.”

A third of the proceeds go to Africa, a third to European customers and the rest to the rest of the world. “Today’s load will probably go to a farmer who can plant them immediately.” Maters is convinced: “The manure problem does not have to occur in Groningen.”

The solution: temporary land exchange. The arable farmer makes the fields he normally uses for the cultivation of so-called dormant crops available to the farmer to sow grass. In exchange, the farmer receives land from the farmer to plow it for a year of potato cultivation. The extra soil means the farmer can dispose of more manure, improving the soil health of the arable farmers’ fields and getting more feed for his cows.

The arable farmer can continue to grow seed potatoes and in the long run will receive healthier fields in return. Maters: “If you approach this properly, all manure produced by Groningen cattle farmers can be processed in their own province.”

The solution seems simple and practical, but Maters will have to talk a lot. Because there is a lot of cold feet in both sectors, he knows. Fear of legal snags, the question whether tenant farmers will cooperate, but also whether an arable farmer can reverse the cultivation of maize on his land. “The maize harvest requires the use of heavy machinery. Arable farmers would rather not have that because it affects the soil structure again.”

No, the camera team of ‘Farmer is looking for a wife’ does not have to travel to Niekerk for Gerald. He already has a girlfriend, Vera, who comes from Utrecht. Step by step, she becomes acquainted with the arable farm that is unknown to her. As far as Gerald is concerned, you can cooperate, but it is not necessary. He expects that she will prefer her own work at the outpatient clinic of the UMCG in Groningen. A woman in the yard changes the rhythm of life on the farm, but going on a summer holiday together is not an option for the arable farmer.

The remediation of asbestos roofs on farmyards will also generate a lot of discussion in the coming years. Maters fears that the image of the Groningen countryside will change if all asbestos has to be removed within ten years. He foresees the demolition of old barns, because remediation and repair of the roofs is expensive due to the disappearance of subsidies and does not result in an efficient industrial building. He expects that many farmers would rather opt for new construction.

What Maters will do with the necessary haste is to reduce the pollution of surface water by arable farmers. The Noorderzijlvest water board has given the sector another year to solve this problem. The pollution is caused by rinsing the boxes for potatoes and vegetables and cleaning the equipment and equipment, Maters says.

According to him, the solution is quite simple. Such as spraying under the roof and purifying the residual water through compost filters. Maters: “Let’s get ahead of the regulations, before the legislator makes it difficult.”

With four hundred members, the Groninger AJK is part of the Dutch Agricultural Youth Contact (NAJK). The interest group for farmers up to the age of 35 has eight thousand members. NAJK organizes local, regional and provincial courses and excursions on new farming methods and entrepreneurship. At a national level there is consultation with the Ministry of Economic Affairs and ‘big brother’ LTO Nederland. At European level, NAJK works closely with CEJA (Conseil Européen des Jeunes Agriculteurs). This organization represents a million young farmers at the European Commission and the European Parliament.

‘As an agricultural sector, we must continue to innovate in order to remain competitive. Young farmers play an important role in this, but they must be given the space to develop their business. I want to make a strong case for this together with my fellow directors’

Partnership Maters in Niekerk in Groningen celebrates its 50th anniversary. The arable farm focuses on the sorting and storage of seed potatoes. In 2017, the brothers Gerald and Arjan Maters renewed and expanded the company. For example, they built a new storage warehouse with a sorting area, a suction system with space for 1,848 crates and a drying room with pressure walls in which 540 crates fit.