Over the past 30 years, there has been increasing awareness of where and how our food is produced.

Mapping a greener future on farms

UAE among world leaders to adopt drones in agriculture 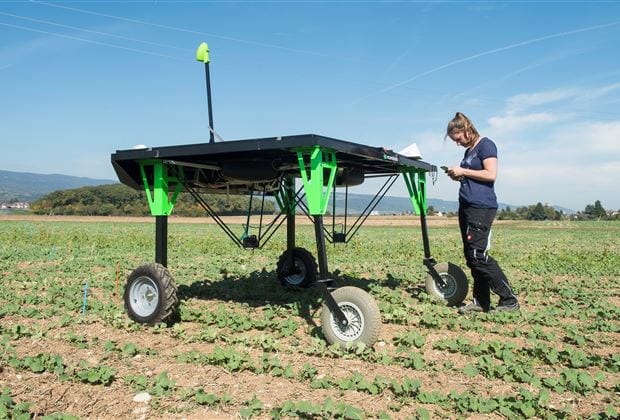 The use of field robots was one of the focal points on the first day of the 22nd Work Science Colloquium at the Agroscope Research Institute in Tänikon TG. Researchers from Germany, Austria and Switzerland exchanged views on the latest findings and studies on automation and digitalization in agriculture.

There is still a lot of potential for development, as the presentation by Franz Handler from Francisco Josephinum, an Austrian training centre for agriculture, agricultural technology, food and biotechnology, showed. For example, the use of field robots often leads to long waiting times.

The main problem is the limited autonomy of today’s robots. A robot can now drive independently on a transport vehicle – and later down again – but not yet independently change the field plot to continue working there.

Nor can he convert himself from one job to the next. So he can’t mow first and then retool himself so that he can start hacking. People still need such changes. This human being is called the “operator” in the world of field robots.

Robots continue to work after work

Franz Handler simulated various scenarios with a research group. It turned out that the expiration-related waiting time decreases when more robots are on the field at the same time. Heisst: The operator hardly has to wait for the robot to do its job, but is always well utilized when using, for example, six robots working at the same time.

According to the study, six robots also have the limit, as Handler points out. If even more robots are used, a single operator will no longer be able to meet the requirements of the various devices. This overcrowding leads to new waiting times.

Field sizes also play a major role in the efficiency of farmers’ use of field robots. For example, the preparation and follow-up time until the robots are already ready for their work is highest if the field covers only one hectare. If the size rises to 10 hectares, this effort decreases in relative terms.

Another advantage of the field robots is that the operator can already work out, while the robot continues to work autonomously for a long time depending on the field size. This fact should be used in the sense of work efficiency, says Franz Handler.

Winfried Fechner from Martin Luther University in Halle-Wittenberg, Germany, also presented new insights into the use of field robots in his presentation. Above all, he sees light field robots as an opportunity to reduce soil compaction.

Today, large agricultural machinery reaches a weight of up to 10 tons, which is a major addition to our soils. As a result, most agricultural soils are highly compacted. This limits water and air conductivity and thus has a negative impact on plant growth and health. Fechner emphasized that the goal should be to get away from these heavy machines.

The means to do this: lightweight, autonomous field robots. These are ideal if the parcel sizes are not too large, which is also better for biodiversity, Fechner said. From this point of view, field robots could also contribute to healthier soils and more biodiversity in the future. Especially in Switzerland, where the fields are usually smaller than in Germany.

The Work Science Colloquium at Agroscope thus gave a good insight into the important current field of research in agriculture: increasing automation and digitalization. Always with the aim of work efficiency – and more and more often with ecological concerns, which could also be achieved more quickly with robots.

Over the past 30 years, there has been increasing awareness of where and how our food is produced.