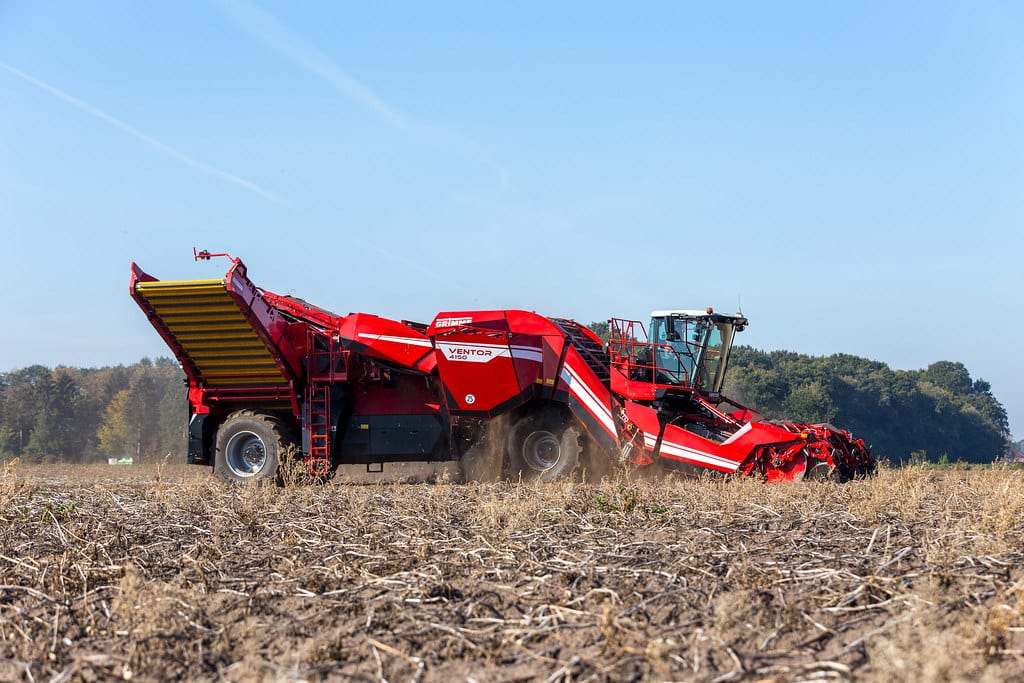 ‘The sector has risks, but at the moment they seem to lie mainly with the grower’

Potatoes are again harvested en masse in September. But the economic shock of the corona crisis has not yet been incorporated into potato cultivation. Large numbers of frozen potato products never came to defrost. On top of last year’s surpluses comes a mountain of new potatoes. Are there any surpluses looming again? And what lessons should we learn from this?

Belgium has a lot of potato surpluses, mainly from potato varieties that are processed into frozen products. These include french fries and mash, which are traded worldwide. But the pandemic kept restaurants, deep-frying and fast food chains closed around the world. That chain of trade was abruptly shut down.

The result is a large potato mountain. Is the new harvest going to get even bigger? And at what cost?

During the corona crisis, Romain Cools, the chief executive of the association of potato processing industry Belgapom, called for ‘eating fries twice a week’. In this way, he hoped to reduce the gigantic mountain of 750,000 tons of excess potatoes. ‘In the meantime, we estimate that there are still less than 100,000 tonnes of surpluses from last year,’ Cools told MO*.

‘Farmers who sell their potatoes on the free market know that this poses risks.’

‘Most potato growers conclude contracts with buyers. In such a contract, buyers promise a fixed price for a fixed amount of potatoes by a certain date,’ explains Cools. “The contracts for the potatoes harvested in the coming months will be respected and will be proposed on free-market potatoes,” he promises.

‘Farmers who sell their potatoes on the free market know that this poses risks’, adds Cools. ‘The free market is speculation. One year there are high prices, the other year low.’

‘An average yield is expected for the new harvest’, says Guy Depraetere of the General Farmers’ Syndicate. ‘It’s always difficult to estimate the potato market and any surpluses of the following year. There are potatoes that can be stored in hangars for a long time.’

Last year, the Flemish government and Belgapom agreed to donate 25 tonnes of surpluses per week to the Food Banks.

For this reason, the Flemish government has no plans for possible new surpluses. ‘Due to the uncertainty about both the supply and future demand for storage potatoes, no prediction can be made at this time about the supply/demand ratio that will occur in the coming year’, the cabinet of Flemish Minister of Landbfold Hilde Crevits (CD&V) announced by email.

For the harvest of autumn 2019 it was agreed with Belgapom to donate some of the potato surpluses (25 tons per week) to the food banks. No such agreements for the upcoming harvest are yet to be made.

‘In addition, this year’s maize harvest, which is used for animal feed among other things, is disappointing. Potatoes, which also contain starch, can be used to make up for this shortage. In this way, any surpluses should not be destroyed’, notes Cools.

‘Potatoes can indeed be processed into animal feed’, concludes Depraetere. ‘Nevertheless, the feed companies will only bite when the price is very low and below the production price’, says Depraetere.

Due to the corona crisis, only the contracted potatoes are currently accepted in the factories. Prices on the free market are plummeting. In the facts, free potatoes are not bought up. The newspaper Landbouwleven even reports in its section “price quotations” that there are no quotations due to a lack of transactions.

To mitigate the impact of the corona crisis, potato growers could turn to an emergency fund from the Flemish government until 28 August. It provided financial compensation for potatoes from the last harvest, which have been lying around since 15 May.

The compensation amounted to EUR 50 per tonne, but the first 100 tonnes of surplus were not reimbursed. In addition, there was a ceiling of 500 tonnes for the fee. ‘On top of that, €13 million in support was provided from Europe for potato growers through direct income support’, the Crevits cabinet says.

‘Because emergency aid is only granted from 100 tonnes, it mainly meets the larger growers’, notes Depraetere. ‘Nevertheless, I am very grateful to the Flemish government for their efforts. In Wallonia, for example, no safety net was set up.’

Drought damage has been compensated by the disaster fund in recent years, but that is now changing.

Potato growers have also received support from the disaster fund in recent years for the impact of the increasing drought on the harvest. ‘When the drought was recognised as a natural or agricultural disaster, farmers could count on compensation from the Flemish government’s disaster fund.’

But that’s about to change. ‘Crop damage due to adverse weather conditions will unfortunately no longer be covered by the disaster fund in the future. To do this, farmers will have to switch to private insurance in the coming years’, explains Depraetere.

According to Cools, such premiums are not necessary when a farmer is working with a contract. ‘The potato sector has long been the “Robin Hood” among the crops with which the most speculated was on the free market. Extreme drought and climate change make this increasingly difficult. In the case of a contract, the responsibility for the tonnages delivered lies with the growers. They, in turn, must do everything they can to deliver the promised weight,’ he explains.

‘Potato contracts in themselves are a good thing because they offer farmers a fixed price’, says Bart Vanwildemeersch of the West Flemish Environmental Federation. West Flanders is one of the largest potato producing regions. It is true that potato production – and processing – carry a large environmental cost.

‘Of all arable crops, potatoes receive the most plant protection products per hectare.’

Of all arable crops, potatoes receive the most plant protection products per hectare. ‘In recent years, growers have been suffering from drought. That’s why growers often want to spray their potatoes with water. Captations were often ignored and so West Flemish streams came to dry. This has detrimental consequences for the quality of the streams and their environment’, explains Vanwildemeersch.

Every three years there are potatoes in a field. In the years between them, other crops come into the field. It’s called crop rotation. ‘We see that the soil is depleted by this,’ says Vanwildemeersch. ‘Especially in West Flanders, where a huge amount of potatoes are grown for export.’

‘Research shows that it would be better to switch to a system where a field is used for potatoes every four or five years. Five years would be best for the soil, but is less economically feasible. That’s why one in four seems like a nice compromise.’

‘We also see farmers fertilizing more for fear of not getting their promised weight. This of course also has an impact on the environment’, points out Vanwildemeersch.

‘However, potato growers are not the only polluters in the story. The potato processing industry and intensive vegetable cultivation also have a major impact on the environment in West Flanders’, adds Vanwildemeersch.

According to Vanwildemeersch, it is time for the potato processing industry to make a big deal out of it in order to limit the environmental impact. Illustrative of this is the current protests in the northern French city of St-Georges-sur-l’Aa against the plans of potato processor Claerbout to open a new branch there. Citizens are concerned about the ecological impact of the plant. They fear odour nuisance, excessive water use, a huge increase in traffic, harmful environmental effects of the use of amoniac, and so on.

Every year, potato growers face a difficult choice. On the one hand, they can conclude a contract in which a fixed tonnage is agreed for a fixed price. In doing so, the farmer must live with the fear of gaining his promised weight and the environment is at risk of being overloaded. On the other hand, there is the option to make a leap into the unknown on the free market.

Although Belgapom says today that most farmers work with contracts, in 2017 that same dome advised against contracting too high a weight per hectare.

‘Due to the dubious contracts, shortages were bought up by the factory at the expense of the grower on the free market.’

‘In 2018 we had a huge drought. The factories were hard for the potato growers’, we belong to the General Farmers’ Syndicate. ‘Anyone who couldn’t deliver his promised tonnages from the contract was hard hit. Due to the dubiously drawn up contracts, shortages were bought up by the factory, at the expense of the grower, on the free market. Free potatoes are at a high price in times of scarcity. That year there were farmers who gave away trailers to potatoes and had to pay an invoice on top of that. For many farmers, that year has not yet been processed, because these debts were often spread over contracts of the following years.’

‘That’s why there’s a fear of putting a lot of weight on the factories. The fear of drought promised less weight in contracts. So what the industry may have to buy on the free market is going to be at bargain prices’, says Depraetere.

How sustainable are the current potato contracts against the background of fluctuating world prices and extreme dry summers?

Towards a new generation of Potato Contracts

In consultation with all parties in the potato sector, the forum Belpotato.be work on a new type of contract. ‘Contracts that ensure a sustainable sector both economically and ecologically. We want to work on a balanced commercial relationship,’ says Cools.

Depraetere is cautiously positive. ‘Belpotato is indeed a positive project. It is a forum in which all parties sit together and work on solutions. I hope it can become a vehicle for improving potato contracts, for which I have been advocating for a long time,’ he said.

According to Vanwildemeersch of the West Flemish Environmental Federation, it is time for the processing industry to take a hit when it comes to the environment. ‘Many risks in the contract are already passed on to the farmer. That is why I can support the idea of setting up a green infrastructure fund at the Flemish level,’ he says. For example, when building new infrastructure, such a fund should ensure that water quantity and quality of a plant are built.

Should the risk be borne by growers, processors, traders, consumers or the government?’

‘The market seems to be very volatile due to varying yields and varying demand. Storage can only take a limited time. So there is a risk that needs to be borne. The question is whether this risk should be borne by growers, processors, traders, consumers or the government. At the moment, there seems to be a lot of risk with the grower’, notes Jeroen Buysse,an agricultural policy expert at Ghent University.

He also questions the environment. ‘Potatoes receive the most plant protection products per hectare of all arable crops. In addition, potatoes leave behind a high nitrate residue compared to other arable crops. You may indeed wonder if it is good that the production of a crop grows so fast’, says Buysse.

‘I don’t think the role of the consumer should be forgotten,’ he adds. ‘Think of systems where a consumer has to automatically adjust their consumption to the availability of food. His financial contribution is fixed, while the amount of food is uncertain. A good example of this is food parcels’, says Buysse. ‘Of course, consumers can simply consume more of products whose supply is greater’, he concludes.

Related Topics:potato sector
Up Next