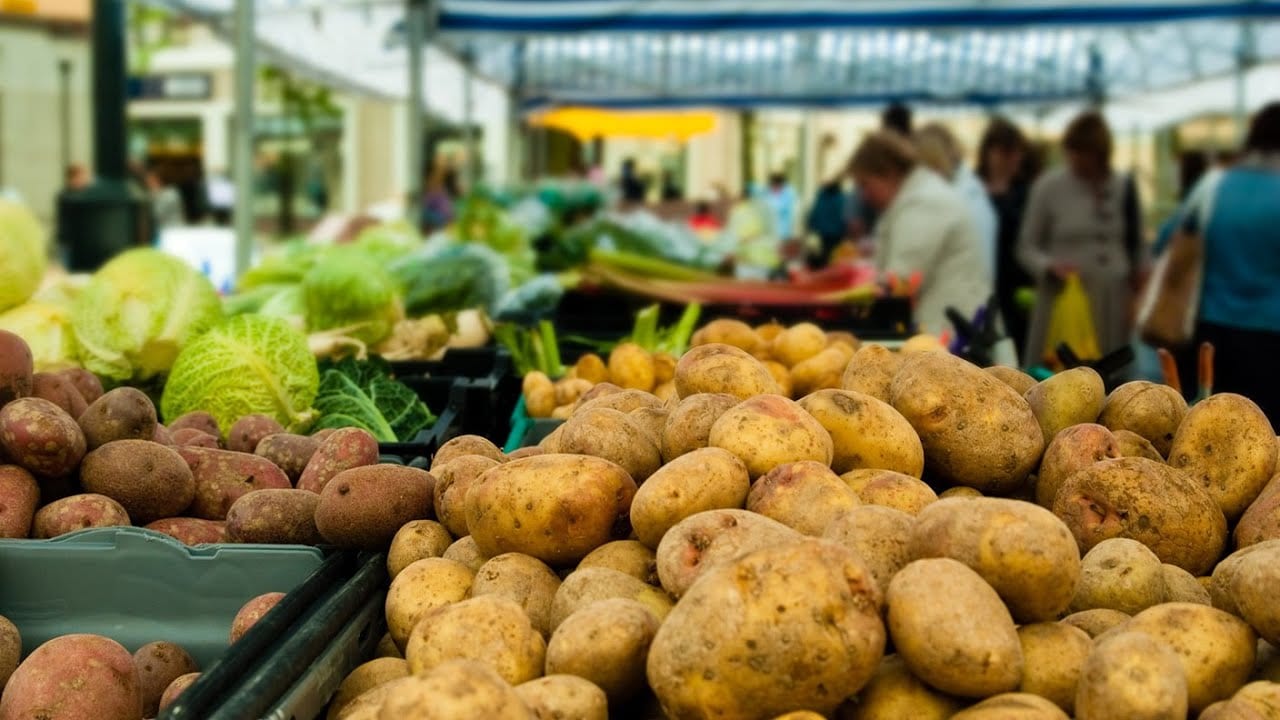 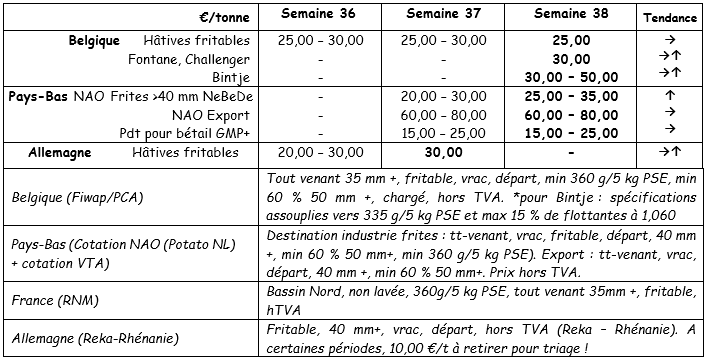 Early industrial potatoes: the last batches are partly passed on to industry and partly to animal feed.

Storage varieties: in addition to the demand based on the contract deliveries, there is a very small demand from the

industry. With the other few small batches being exported to Africa (Senegal), there are not many export activities. Supply is very limited due to low prices and harvest difficulties due to the drought.

The harvest of the early potatoes is coming to an end and in the sandy areas the harvest has begun of the storage varieties, which have been regularly watered/watered beforehand. The harvesting conditions have deteriorated considerably and some work in the fields even had to be interrupted. Industrial customers are hardly interested in the volumes of rare potatoes and therefore they are marketed on alternative markets (livestock, starch, biogas). Many varieties for the french fries industry also have to be harvested.

Actual transactions are rare. Prices vary and range between 2.50 and 3.00 €/q for the industrial potatoes that are delivered immediately, up to between 10.00 and 12.00 €/q for spicy varieties on the fresh markets and between 18.00 and 20.00 €/q for straight-fried varieties. There are very few export activities, apart from some deliveries to Africa and the Caribbean at prices of around €11.00/q (sorted in big bags and therefore destined for export).

The industrial markets are making a restart with very average yields and difficult harvesting conditions due to the ongoing drought. The prices from the factories for small batches on the basis of contracts are between 2.50 and 3.00 €/q for early varieties, Fontane, Daisy and Shepody. Prices on fresh markets are not as low as at the beginning of the season, as yields make some market participants more optimistic. Large-scale harvesting has only just begun in Flanders and has already progressed a bit further in Hauts-de-France. Because of the dry weather, the plots that have been harvested sufficiently need water before potatoes can be grown again. This is the case in Picardy, among other things. When irrigation is not possible, growers are concerned about the high content of dry matter. Yields are not at the expected level. In Beauce, the harvest is coming to an end and 75% of the harvest in Grand Est has been completed, in both cases with the help of irrigation. In Normandy, work will be suspended next week if it does not rain and yields are already disappointing.

Yields are hardly within the multi-year average (sources: UNPT / CNIPT / Chambre d’Agriculture). The samples in weeks 35 and 36 of 240 parcels (all varieties and regions combined, with or without irrigation) show an average yield of 43.85 t/ha, a yield comparable to that of 2019. The progress in 2 weeks was only 3.5 t/ha, and the difference with the 5-year average is reversed (from +0.6 t/ha for the previous sample to -0.6 t/ha). The average yield varies considerably by region. Irrigation yields on average 9 t/ha more compared to the yield of dry plots.

Germany
Fresh market (early and semi-early potatoes): prices have fallen again, both for solid-cooking potatoes: €11.67/q (€12.25/q last week) and pre-cut/floral potatoes: €10.71/q (€11.08/q last week). The harvest is in full swing and supply is still greater than demand, hence the lower prices. Some early and semi-early potatoes have not yet been dropped off and weigh light on the market… The sector hopes that prices will stabilise during the ‘Einkellerungsaktionen’ (promotional campaign for preserved potatoes) at the end of September.

Industrial market (early and semi-early potatoes): prices are slightly firmer and are around €3.00/q (between 2.00 and 3.00 €/q last week). The volumes of rare potatoes that are not marketed for the french fries industry are used for potato discs, potato granules, starch production and/or animal feed…

Organic potatoes: producer prices have fallen significantly and are between 41.00 and 43.00 €/q (all varieties and markets combined).

The organic harvest, mainly intended for the fresh market, is in full swing and the gross yields are reasonably good (in Bavaria), but only on average in the east.

There are many problems with molehills, scabies, rhizoctonia and there are sometimes too large potatoes. Last year prices were around 66 €/qt and in 2018 around 56 €/qt. The many growers who had to irrigate think that these prices are not good enough. Following the good prices of the past 2 years, some organic growers have increased their seeding area and other growers have switched to organic farming. In 2019, 10,100 hectares were planted (800 hectares more than in 2018), of which 8,800 hectares were for the fresh market (with early varieties).

A trend in mass retail, which is on the trend of ‘local and seasonal’, is to give preference to local cultivation for as long as possible. Furthermore, refrigerated storage has a promising future and slow and late varieties will also do well in the future.

* If the fields are not worked, 1 €/q of sorting costs must be removed from the price

The harvesting activities are putting some pressure on the various markets, but in general prices were difficult to maintain, with the exception of some segments that had high-level prices.

On the retail markets, a residual offer of early potatoes has been offered with prices of between 11.00 and 13.00 €/q, with prices for potatoes of french fries quality of around 16.50 €/q (Marquis, Agria, Maris Piper). Prices of the same level are available for the Fish and Chips stores. For the industry, the demand for potatoes that are not delivered on a contract basis is so small that it is negligible and the termination of contracts is quite late. In the fields, harvesting activities are well in the south, but slow down in the east, where irrigation/watering has become necessary beforehand. There is some disapproval due to weak spots and there are some contract deliveries for storage. The damage from weak spots also seems greater than usual.