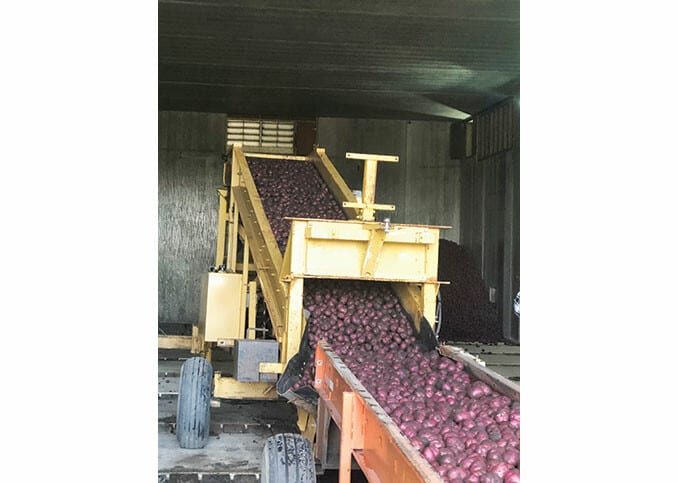 Growers in the Red River Valley, which straddles northwestern Minnesota and northeastern North Dakota, say growing conditions have been great this season, and they expect a good-size crop, far superior to last year’s.

He estimated that 30% of association members’ crops were lost, and some individual growers lost nearly their entire acreage.

“I don’t see that happening this year,” Kreis said.

East Grand Forks-based A & L Potato Co. should be at full capacity for the first time in years, said sales representative Jenni Bruer.

Last year, the company, which grows red and yellow potatoes, lost 95% of its own crop, Bruer said.

It seems that there’s always “some kind of disaster,” either for the company or for one of its growers, she said.

“This year, everyone we work with seems to be having decent yields.”

The size profile was looking good.

“It’s exactly where we want it to be,” Bruer said, with a good mix of premium and B-size potatoes.

“Everything is going smooth at this point,” he said the third week of September. “Digging conditions are ideal, and the weather looks like it will be nice to us this fall.”

He expected the harvest — 100% red potatoes — to continue into mid-October.

“We’re very optimistic of having a good harvest,” he said.

Lone Wolf Farms, Minto, N.D., was midway through its harvest of dark red norland variety potatoes by the third week of September.

Cool temperatures, good soil moisture, good color and sheen and a normal size profile all were in evidence, he said.

He expected the harvest to be completed by late September with shipping out of storage starting in mid-October.

But he was concerned about the harvest weather.

“We haven’t had a nice rain for a long time, so the ground gets harder and harder for dryland (non-irrigated) farming,” Folson said. “That’s a concern for the valley.”

Harvesting when the ground is too dry can bruise the potatoes, he said, so he planned to hold off digging most of his red and yellow potato acreage.

Summer heat may have knocked down some yield potential, he said. But still, he described quality as good with yields “average.”

“The size profile is nice,” he added.

Kreis was concerned about the falling f.o.b. prices of red potatoes, which, he said in late September, had dropped from relatively high levels to the lowest they had been in several years.

“Until retailers start promoting heavier and dropping their shelf prices, we’re going to have problems moving the crop we have,” he said.

COVID-19 has had little direct impact on most Red River Valley grower-shippers so far, in part because most companies were winding down their shipments for the season when the coronavirus struck last spring.

“We’ve been fortunate. We’ve had no active cases on the staff,” said Jackson of J.G. Hall & Sons. “I think our rural location really helps us with that.”

Sales were up, he added.

“On the retail side, we saw a big increase in March,” Jackson said. “Foodservice slowed down dramatically.”

The sales increase continued through mid-April, when the company ran out of potatoes.

In September, growers were shipping about 80% of their potatoes to retail stores and 20% to foodservice, he said.

“It was all we could do to satisfy existing customers.”

Related Topics:Red River Valley
Up Next