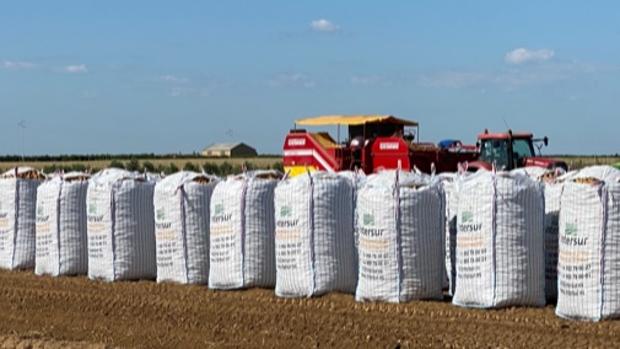 The Sevillian company Intersur 2011 and the Albaceteña company Agromar Hispana have created the Intersur group, which already produces more than 100,000 tons of potatoes to packers who sell them to supermarkets. Currently, the group controls the cultivation of potatoes in 3,000 hectares of France and Spain to guarantee production during the twelve months of the year. Its potatoes are on the line of virtually every supermarket in Spain and much of Europe, as well as in Kuwait and Dubai. The goal of Intersur, whose CEO is Angel Muñoz,is to reach more countries in Eastern Europe and the Middle East, reaching a production of 150,000 tons per year in three years.

Although the Intersur corporate brand has been created, the two companies will continue to have their own legal entity after 30 years of activity. Intersur, based in Seville, is participated by Patatas Andaluzas, Actividades Exclusivas and Angel Muñoz (40%) through Agromar Hispana. Agromar, based in Albacete, is 100% owned by Angel Muñoz. Intersur is engaged in the production and marketing business of new potatoes in Spain and Agromar does the same in France. “The two companies do not compete with each other because they have the same product, the same philosophy and similar policies but operate in different markets,” says Angel Muñoz.

Now the group is part of Intersur and Agromar, the company Intersur Logística,recently created to provide logistics services to its customers, and the gala subsidiary Agromar France. By integrating its business teams, the group has changed its business plan and strategy. The group’s turnover in 2019 was 48 million euros. “The forecast in 2020 will depend on potato prices, as this year is low. As for the volumes we will be around 10 or 12% more kilos than last year,” says the company.

“We have created the Intersur trademark to have greater capacity to reach the European and Middle East markets. Now we have more strength than before working separately. We want to consolidate our sales in those markets, but reach more countries. To do this,” he says, “we’ve increased the salesman’s templates.”

The group’s production volume is now just over 100,000 tonnes of potato,but expects to reach 150,000 tonnes of product in three years. “The multiple locations we have in Spain and France, the commitment we make to agricultural innovation, the team of commercial technicians in the two countries… it makes it easier for us to give a one-time offer during the twelve months of the year to the big panelists or potato packers who work with supermarkets,” says Muñoz

“We meet with the packers, we talk about their needs, what varieties of potatoes they need, since each one asks for different calibers or shapes. We, he stresses, are able to program the production and supply of specific variety volumes with specific qualities or characteristics for each customer. We currently work with 40 varieties of potatoes, depending on production area and destination customer.”

Currently, its production is located in Andalusia and Castilla-León, and soon hopes to start in Cartagena. As for the land you use, lease farms to sow and also reach privileged agreements with producers in each area. “In the latter case, we give farmers the seed, tell them how they have to sow, what land they have to sow, we do technically monitor all crops, becoming responsible for 100% of that production.”

In Andalusia, more specifically in Seville, it has Intersur 300 hectares leased and in Castilla-León, about 250 hectares,but controls 3,000 hectares of potato production thanks to privileged agreements with farmers. “In France our business model is not of lease of farms, but of privileged agreements with producers, although in the model we are advancing is that of leasing farms«

“Our potatoes are in all supermarkets in Spain except Lidl and Aldi. In Spain you can buy our potatoes in Mercadona, Día, Carrefour, MAS and regional chains… Hijolusa is one of his most important clients”, says Angel Muñoz. As for the countries where your potatoes are tasted, they are consumed in France, Spain, Portugal, Belgium, Germany, Italy, Poland, Czech Republic, United Kingdom… With the creation of the Intersur group, “now we want to reach more countries, especially since we can have the product that is needed in each country. It is not the same potato we are asked for in Bulgaria as in Italy. We want to reach all of Europe and the Middle East. We have to reach Eastern Europe, as we are only present there in Poland and the Czech Republic. As for the Middle East, we are already in Kuwait, Dubai… It has helped us a lot in this Extenda in the Middle East, where we started working three campaigns ago and being a less accessible market we have worked with intermediaries. The challenge is that starting this year we sell directly to the packers of those markets because intermediaries are commissioners and do a job very close to opportunity and we want stable markets. In Europe we work directly with packaging companies.”

Angel Muñoz, shareholder and CEO of the Intersur group, potato producer and marketer, refers to farmers’ complaint about the limited margins they receive saying that “that is relative”. In his view, “it all depends on the level of innovation and investment that the farmer makes. A producer who is constantly looking for better productions, who is testing new varieties and is on the need for higher quality to satisfy the large distribution and the consumer, is finding returns. A year of catastrophes may come from over-production that causes prices to fall, because potatoes are not subject to any market control organization, but there are years of profitability. In fact, the last three years we’ve had profitable crops. Another thing is the farmer who continues to produce with criteria of 10 0 20 years ago, which represents a large part of the market. That farmer is usually the one who may have trouble finding profitability.”

In his view, “there is nothing to do with a farmer sowing as before and who has not boarded the train for the changes that the sector has undergone in the last 5 or 10 years, than the producer who is attentive to innovations in variety, collection system, production at times when there is increased demand, installation of systems to control the use of water and plant protection products”.

According to Intersur, “the market has become increasingly demanding with the visual or image qualities of the potato. The supermarket does not want potatoes with blows, with defects… and there are farmers who are knowing how to produce potatoes in an almost perfect way despite weather problems or others who are alien to them. Potatoes are required to have culinary and taste qualities but also to be beautiful. There are producers who are getting it and others are not.”