in Africa, Seeds
Reading Time: 3 mins read
A A 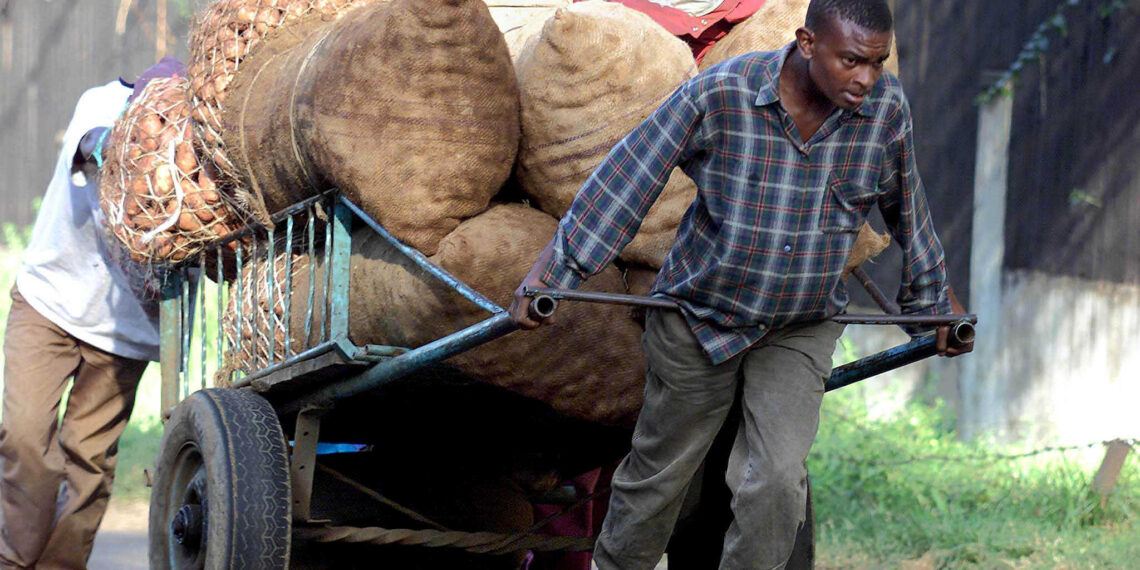 Young men carting sacks of potatoes to the market encounter a steep hill just outside Nairobi June 13, 2001. [As the three east African nations of Kenya, Uganda and Tanzania read their annual budgets today, top of the agenda will be poverty and its eradication where financial experts point out that more than 50 percent of their population spend less than a dollar a day. ] - PBEAHULAJDV

The Nakuru in Kenya county government plans to strengthen its collaboration with the Dutch government in promoting new technologies and addressing shortages of certified seed in the potato subsector.

According to governor Lee Kinyanjui, while Kenya’s potato seed demand stands at 30,000 tons annually, the country only produces 6,700 tons. Most farmers are recycling crop from the previous season to use as seed, a move Kinyanjui blamed for the shortage that the country faces.

In a meeting with a delegation from Netherlands led by ambassador Maarten Brouwer, Mr Kinyanjui stated that scarcity of certified potato seeds in Kenya has stagnated production of the crop at 7 tons per hectare against a potential of 40 tons.

Kenyanews.go.ke quoted Kinyanjui as saying:  “Only one per cent of potato farmers in the country use official seeds with the rest using recycled seeds from their farms and the informal sector thereby leading to low production of the crop. The County administration will collaborate with Netherlands in promoting new farming technologies for breeding multiple disease free and high yielding seed as a way of unlocking the over Sh15 billion potential of potato farming in the devolved unit.”

Ambassador Brouwer observed that since 2012 the governments of Kenya and Netherlands have been partnering to facilitate importation of potato seed.  He said that Dutch government will provide technical assistance to the County’s department of agriculture to boost value addition in potatoes.

From 1st of April onwards, it will be illegal for potato traders to package potatoes in bags of over 50 kilograms once. At that date, section 42 of the Agriculture Fisheries and Food Authority Act of 2013 will come into force. Kenya’s Agriculture and Food Authority says the measures seek to weed out middlemen who use extended bags of 130 to 260 kilograms, leading to price differences of up to 1000 percent.

In 2019, the Cabinet Secretary for Agriculture came out with the Crops (Irish Potato) Regulations, which provide for the regulation of production, grading, storage, collection, transportation, warehousing, marketing and processing of Irish potatoes. To this end, Surveillance teams from AFA’s Food directorate reported a high level of non-compliance with the regulations. It is for this reason that AFA is moving in to enforce strict guidelines.

According to kbc.co.ke¸ AFA has now engaged an enforcement multi-agency team in the county of Nairobi that will also begin sensitization of traders for Nairobi markets and its environs by the end of this month.

10 years of professional association of potato growers of Russia

The Canadian province of Prince Edward Island (PEI) wants to be able to restrict the cultivation of red fruits in...

According to project leader Niels Haining of Bionext, reliable potato varieties for organic cultivation also offer benefits to the conventional...

Scientists from Krasnoyarsk have developed a new variety of potatoes

Scientists from the Krasnoyarsk State Agrarian University have developed a new potato variety adapted to the harsh climate. This is...