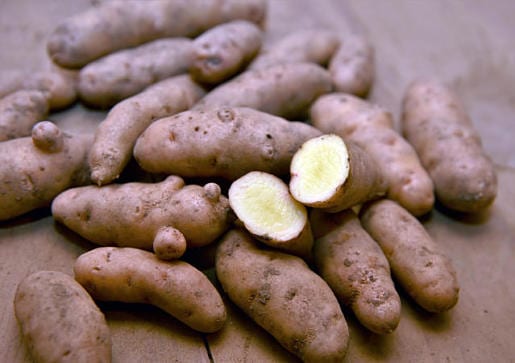 Weilach – “People always think that blue or red potatoes are something modern,” says Gabriele Karl with a smile. The part-time farmer from Weilach is always willing to provide information about her special potato varieties. That is why she is a welcome guest in the open-air museum at haus im Moos, where she will build up her potato stand again on vegetable harvest day.

Gabriele Karl sells her special potato varieties directly from the small potato cellar built in 1956. It is still clearly filled, since the harvest has only just begun. Photo: Andrea Hammerl

The Karl family grows seven different varieties of potatoes. Uncrowned stars are the pink pine cones, which were already grown around 1850 in several European countries. They are still appreciated today as a delicacy – because of their intense, spicy-earthy taste. They owe their name to the elongated tuber shape with slight adhesions and the slight pink colouring of the shell. The meat, on the other hand, is light yellow. “We saw her on TV 20 years ago,” says the 57-year-old as she came to the historic potato variety, “that was in a post about the potato soup.”
The Charles sailed to him and bought a few kilos of seed potatoes. Since then, they have the pink pine cones in their assortment and rebuild them as long as possible. Of course, royalties are not charged here, not only because the variety is ancient, but also because small farms under five hectares are basically exempt from it.
In addition to the pine cones, Heiderot and Blaue St. Galler stand out. Both are modern varieties. The latter has been replacing the historic variety “Hermanns Blaue” since last year, which Hans and Gabriele Karl used to cultivated, but which have been removed from the range because of their scab susceptibility. In addition, the Blue St. Galler keep the color better than previous varieties.
Caution should be exercised, however, when preparing – for all red and blue meat varieties. Because the anthocyanins, which give the potatoes the conspicuous color, are water soluble. Therefore, these potato varieties should not be boiled in water as salt potatoes without a peel, but gently steamed in the shell, baked in the oven, for example, as rosemary potatoes or fried in fat in the pan.
Gabriele Karl cuts red, blue and yellow potatoes into cubes or slices, frythem them in fat and let them cook with the lid closed. Finally, the pan lid is removed so that the potatoes toast a little more. In potato salad made with vinegar, all colored potatoes lose the dyes, and the milk in the mashed potatoes also pulls them out. Obtaining the color during the preparation is not only decorative, but also serves health. Because the color pigments are antioxidants such as vitamin C or E. They catch harmful radicals and thus prevent cell aging. In addition, they are said to have anti-inflammatory and vascular protection and positively influence visual processes.
The youngest variety in the range is Lilly, a modern floury, medium-early variety approved in 2011. The remaining four of the seven potato varieties that the Karls have grown this year have already been awarded the “Potato of the Year” award.
This was introduced in 2006 for older varieties or from farming, i.e. which can be recreated without any fees. Pink pine cones were awarded in 2013, Linda in 2007. The background was that Linda had been withdrawn from the market in 2004 due to expired license and was no longer allowed to grow – which mainly affected organic farms. After a tough fight, she was finally admitted back to Germany in 2010.
Sieglinde, the oldest potato variety still available from 1935 approved by the Federal Variety Office for Commercial Cultivation, was allowed to adorn itself with the predicate in 2010, Quarta last year. It is a slightly recognizable by her red eyes, versatile potato variety, which has become somewhat out of fashion in recent years.
Gabriele Karl’s regular customers, however, appreciate their potato varieties. “Last year we sold more potatoes than ever before,” she says, “we barely had seeds left.” The sale is not a centimetre, but kilograms directly from the potato cellar.
Customers come to the farm, where they can also buy fresh eggs and seasonal pumpkins. The Weilacherin is not to be found at weekly markets. “The weekly market is not worth it for us,” Gabriele Karl knows from experience, because the special becomes commonplace there. But she is at special markets such as the farmers market in Hundszell or at the museum festival in Kleinhohenried am Haus im Moos. The festival is cancelled this year, but she will set up a potato stand there on vegetable harvest day, when visitors are allowed to harvest the museum gardens.
Gabriele Karl and her potato stand can be found on Sunday, October 18, from 1 to 5 p.m. for the vegetable harvest day in the open-air museum at Haus im Moos and on Sunday, October 25, from 10 a.m. to 5 p.m., at the autumn market at the Farmers’ Equipment Museum in Hundszell.
Potato of the Year By Andrea Hammerl

Three-coloured potato dishes can be conjured up from Blue St. Galler, Heiderot and Lilly. These are fried in fat and then braised (above). Pink pine cones (right) are a 200-year-old potato variety. They were “Potato of the Year” in 2013.