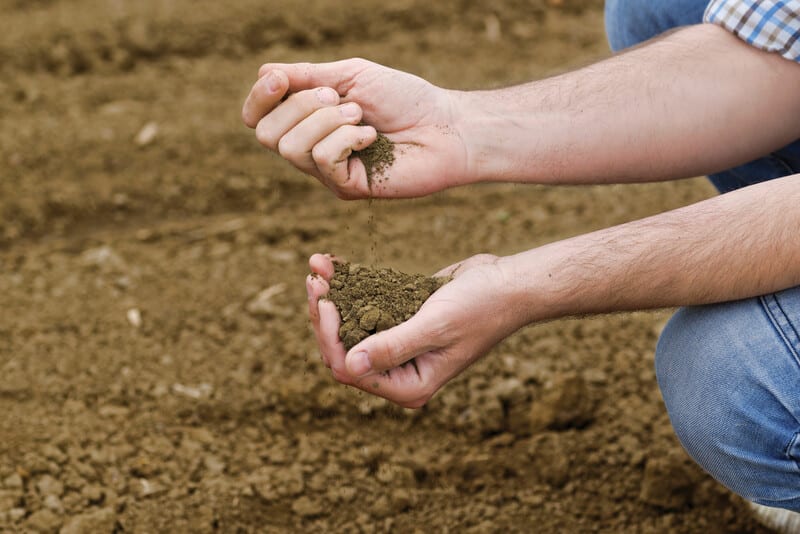 “On our farm, sodicity started showing up around permanent wet areas,” Cheatley explains. “The wet cycle we are in has kept many low areas wet year-round. We started to see reduced productivity in these Rings of Death. What once was our most productive land struggles to grow anything.”

Salts generally make their way into soil from parent material (what soil is formed from) and groundwater discharge, says Tom DeSutter, a professor of soil science at North Dakota State University (NDSU). In the northeastern part of the state, salts come from shale and the upwelling of water from the Dakota Formation aquifer, whereas in southwestern North Dakota, they are predominantly from sedimentary materials.

“When a soil has too much sodium and overall low salt content, the soil’s clay particles repel each other,” DeSutter notes. “In natural settings, over a long period of time the dispersed clay particles move down the soil profile and create columnar structure that can be quite difficult for plant roots to penetrate. Thus, the soil is not very productive. These soils can often have low trafficability when wet and become quite hard when dry.”

To address these challenges, Cheatley has partnered with NDSU Extension to remediate soils by incorporating flue gas desulfurization gypsum, a by-product from the combustion of coal. He’s especially interested in tackling the 5% to 15% of a quarter’s tillable acres where nothing grows.

“The problem is getting worse, and I am looking forward to seeing the gypsum reversing this trend,” Cheatley says.

NDSU Extension is the winner of the monthly Farm Journal Monthly Story Lead Contest, a partnership between eXtension and Trust In Food, a Farm Journal initiative. In August 2020, the contest focused on surfacing stories of Cooperative Extension collaborating with farmers and their communities to improve soil health.

Gypsum is a byproduct of coal-fired plants in western North Dakota. When incorporated into the soil, a series of chemical reactions occurs in which calcium “acts like a bridge between soil particles and promotes chemical aggregation,” explains Naeem Kalwar, a soil health specialist with NDSU Extension who has been helping Cheatley remediate challenging soils. “That results in improved soil structure, pore space and water infiltration just to name few benefits.”

The use of gypsum—along with other soil health practices such as cover crops, which Cheatley will try for the first time this year—is intended to help combat sodic soils and also promote overall soil health.

The efforts have the potential to save farmers in the region millions of dollars, especially in production of the most at-risk crops such as soybeans, corn, spring wheat and canola, Kalwar says. He’s clear it will take years for Cheatley and his neighbors to see the benefits of the products and conservation practices they are adopting.

On Cheatley’s farm, Kalwar recommended applying between seven and 10 tons of gypsum per acre. Cheatley purchased a Chandler litter spreader for use on sodic areas and secures gypsum at about $4 per ton from a plant in Stanton, North Dakota. The product has “the consistency of damp flour and does not spread well out of normal fertilizer equipment,” Cheatley notes. Once the product is applied, it is worked into the soil.

Other practices meant to mitigate sodicity also are under evaluation at NDSU Extension. Among them is planting perennial salt-tolerant grasses in areas where annual crops simply won’t grow. Farmers can save between $82 and $187 per acre for not planting crops here, Kalwar says. Although producers must pay up front for the grasses in Year 1, they will grow back on their own in subsequent seasons.

“By providing a good vegetative cover above the ground, perennial grasses will reduce evaporation, whereas, growing roots will help lower groundwater depths and minimize capillary rise,” Kalwar points out. “Farmers can mow, hay or graze these grasses and can actually earn some income rather than only losing money on the problem acres. If cut at the right times, these grasses are fair to good hay.”

For now, Cheatley isn’t planting perennial grasses. He’s focused on evaluating the benefits of the gypsum and cover crops in the years ahead as he continues to refine the potential of his farm’s soil.

“Our farm has just tried a few of Naeem’s recommendations,” Cheatley explains. “Naeem always encourages us to try these ideas on a few acres to gain experience.”