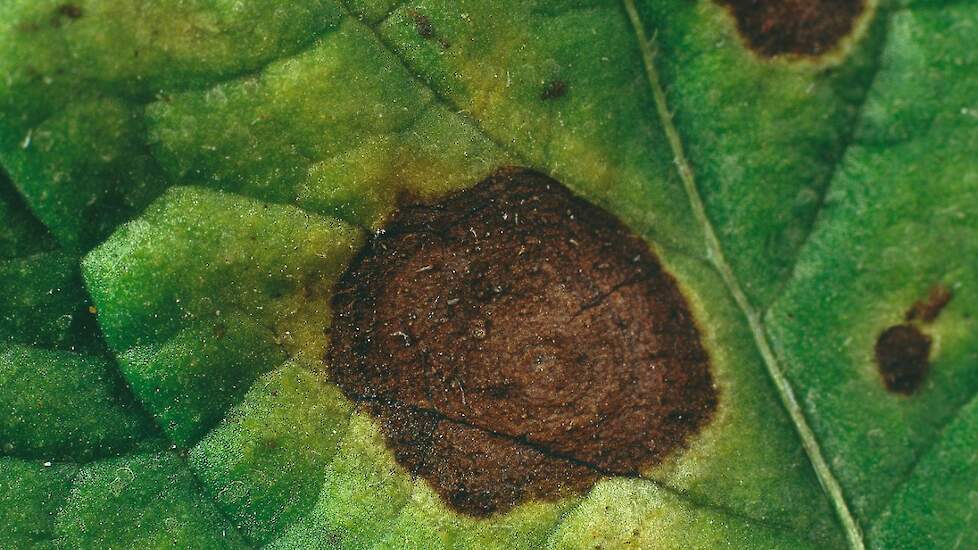 With a number of dry summers in a row Alternaria has become an annual phenomenon in potatoes. Cro Advisor Sander Uwland of Bayer expects the disease to be a keeper, even if the dry summers persist and there is probably no mancozeb to be used after next season.

For starters, what exactly is Alternaria for a disease?

,,Alternaria is a weakness fungus and needs a damage or port to be able to infect. Alternaria can cause a lot of damage, especially on plots that suffer from drought or other stress conditions.

Do growers recognize the disease?

Yes, I think so. Alternaria is characterised by the numerous small spots on the leaf. These are bounded by the veins of the leaf, which makes the spots look slightly angular. Also typical are the concentric rings in the spots. Sometimes there is some confusion with other phenomena such as Botrytis, Verticillium or manganese deficiency. But the multitude of angular spots – almost always in an outdated crop, make Alternaria quite recognizable.”

Are there differences in degradation between regions?

,,Overall, you can say that in the drier regions – North-East and South-East Netherlands – there are usually more Alternaria than elsewhere. But, I don’t think any real research has ever been done on this. Moreover, the differences between regions are not very large. I therefore see Alternaria as a broad, national problem.

How harmful is Alternaria anyway?

In practice, it can quickly be 5 to 10 percent loss of yield in the case of an attack. Then you will soon be talking about a few tons of potatoes. So there is plenty of reason to take the fight against Alternaria seriously.

How can you best tackle Alternaria?

,,Most potato growers now use the component mancozeb against Alternaria and often as an addition to the phytophthora control. That’s relatively cheap and works well. In addition, this also gives some manganese as leaf nutrition.

Problem, however, is that the substance mancozeb on the nomination stands to disappear. 2021 is expected to be the last year for mancozeb. The – until then – only alternative to mancozeb are resources based on diphenoconazole. These can be used from the end of flowering.”

You say: so far… Does Bayer have anything in store to fight Alternaria?

,,We hope to come up with a new means next season. In trials we have seen that this drug works excellently against Alternaria. In addition, it also has a good effect against Botrytis and a good side effect against Sclerotinia. This allows it to tackle all important fungi – outside Phytophthora – powerfully and the crop remains visibly greener and more vital.

Another important advantage of the drug is that it contains two active substances that intervene differently on the fungus. This gives it good resistance management.

Resistance management… do growers take this into account when making the choice of resources?

In my view, far too little. While the consequences can be very large. Take the duist control in North-East Groningen, which has become increasingly complicated as a result of years of unnoticed selection of resistant duist plants. That process should not repeat itself in the potatoes. New means against Alternaria with other active substances are therefore very welcome in cultivation.