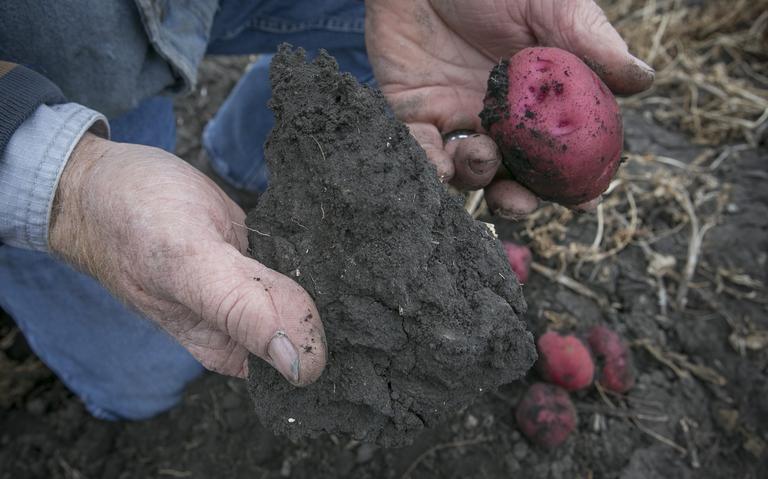 The farmers whose crops were left unharvested were waiting for rain to soften the dirt lumps so they wouldn’t bruise the potatoes, then temperatures dipped into the low double digits and froze them. The dry fall that resulted in ideal harvest conditions for most Red River Valley crops wreaked havoc on potatoes near Grand Forks grown for the fresh market.

From 1,600 to 2,000 dryland acres – those grown without irrigation – were left unharvested because fields were so dry that dirt lumps were bruising the potatoes, reducing the quality, said Ted Kreis, Northern Plains Potato Growers marketing director. Dirt clumps form when wet soil dries out and forms a hard cake over the top soil layer. Farmers planted about 17,000 to 18,000 acres for the fresh market this year, he said.

The farmers whose crops were left unharvested were waiting for rain to soften the dirt lumps so they wouldn’t bruise the potatoes, then temperatures dipped into the low double digits and froze them. “Early harvest was really good – the first and second week of September,” said Kreis, noting that then conditions turned dry, and little or no rain fell on fields for the remainder of the month. Some of the farmers who were unable to harvest their red and yellow potatoes because fall 2020 was too dry are the same ones who had to leave fields unharvested last year because they were too wet to support equipment.

In 2019, about 5,000 acres of potatoes grown for the fresh market were unharvested in the Red River Valley, according to Kreis.

“It was significantly worse last year,” he said. However, reduced production that has resulted from unharvested acreage is negatively affecting some Red River Valley wash plants, said Kelly Grotte, a Thompson, N.D., potato farmer. “The wash plants have fixed costs that need to be covered,” he said.

Grotte used his irrigation system to wet the ground so he could harvest his potato fields. Only a tenth of an inch of rain fell on his land during September, so if he hadn’t put water on them, he would have had to leave two-thirds of his crop unharvested, Grotte said. Potato farmers who didn’t have the option to use irrigation to moisten their fields couldn’t do anything to alleviate the dry harvest conditions.

“We kept seeing the forecast, and there was always rain – it’s going to rain in a week So you wait and it dries out some more and, eventually, you start freezing the potatoes,” Grotte said. “It’s one of the worries when you’re dryland farming. It’s a lot of work and expense.” Potatoes that are frozen will spoil in storage. On Wednesday, Oct. 28, Grotte kneeled on the ground in an unharvested potato field south of Grand Forks and dug into a hill, pulling out potatoes with tops covered in white frost. “They’re all frozen,” he said of those potatoes, which, once thawed, will turn into mush and can’t be stored.

The harvests of 2019 and 2020 illustrate the challenges potatoes farmers who grow the crop for the fresh market face. ”We left a third of the crop in the ground last year. That was because it was too wet,” said Grotte, estimating it costs him $1,700 per acre to grow potatoes for the fresh market. The costs include storage rent, seed costs and equipment costs.

Typically, fresh potatoes yield from 150 to 230 100-pound bags per acre, so farmers who harvested their 2020 crop have potential for a good return on them, Kreis noted.