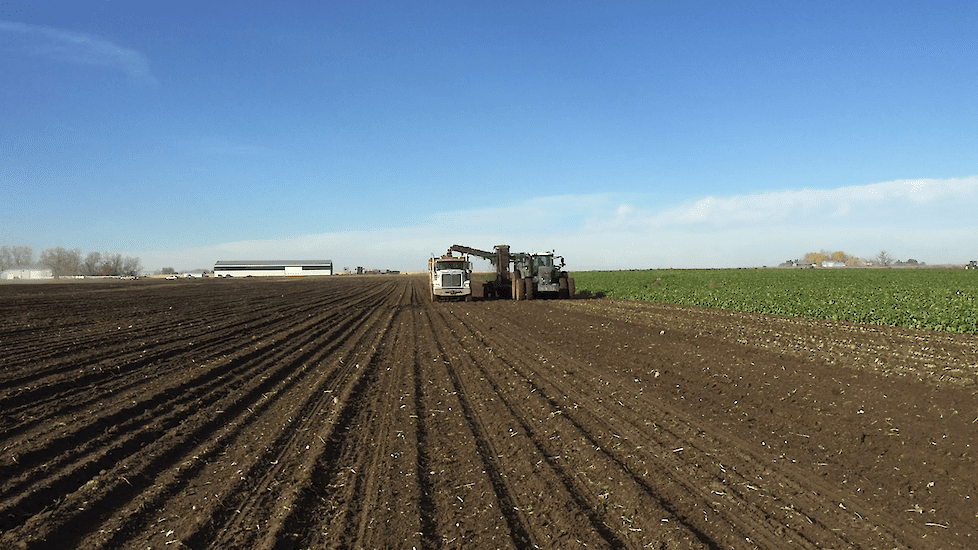 The harvest is ready, it went very smoothly this year. However, the devil was in the tail: During the last days of the beet harvest, winter started temporarily with severe frost and a lot of snow during the beet harvest. And that while we had to stop harvesting beets a month ago because it was too hot.

It can be wrong; this way you work in full sun, 25 degrees on your head, and a few weeks later there is snow and the night temperature has dropped to minus 20 degrees. That’s the challenging climate we face here in Alberta. It was so hot at the beginning of October that we could only harvest at night by order of the factory. The factory did not want to receive beets that had been harvested during the heat during the day. Then unfortunately things don’t go that fast anymore, but we had to.

We usually spend three weeks harvesting potatoes (including one week for delivery from land), and another two weeks harvesting beets. And we were well on our way with that when winter came. So it came sooner than hoped. It is then so cold that everything freezes immediately. The beets can then freeze to the tip. Fortunately, it was not too bad for us, but some of the colleagues where we helped with the harvest suffered significant frost damage. These beets are processed immediately, so it is not a problem in itself. Mid-September to early October is the best time to harvest for storage in Alberta.

In the end, our farm reached a yield of 75 to 80 tons of beets per hectare, with an average sugar content of 20.34 percent. The latter is more than in the Netherlands, I know. We owe this to the many sun we have had. The acre yields may not have been as high as in the Netherlands, due to the shorter growing season. But ultimately it’s all about what you get out of it, and these beets did contain sugar.

In my previous column I already indicated that we have been contracted fewer potatoes due to corona. The plan was to expand our potato acreage (approximately 500 hectares this year) by 20 percent. In anticipation of this expansion, we were already busy building a new storage facility to store those extra potatoes. However, due to the corona, the French fries industry has stalled around the world, and unfortunately our acreage expansion was canceled.

Strangely enough, it now seems that the French fries producers in North America (so Canada and US) are short of raw materials. They run at 80 to 90 percent of their capacity, in order to keep running. The industry had thought it would be able to run on the old harvest for a long time, but processing it has gone faster than expected; the old harvest was gone at the beginning of August. Sales are picking up again in this part of the world. Unlike in the Netherlands, people do eat in the restaurants here, and there is also a lot of sales via the drive-throughs. As a result, our early potatoes (50 hectares) did not even go into storage, the factories wanted them immediately.

Our new storage sheds are now ready. These are built on growth, and because that 20 percent extra potato cultivation was canceled, we had plenty of space in this shed. It contains about 25,000 tons of potatoes, and we have now delivered about 3,000 to 4,000 tons. We used a small part of the space that was left, good for 8,000 tons, for the storage of our last harvested beets. These will soon be sent to the collection point where they will be sampled and loaded for the factory. Normally we bring the beets directly from land to this location, but due to the weather we have chosen to harvest even more than usual to get them out in time. We harvest our 300 hectares of beets with a twelve-row header, followed by two six-row trailed machines, so we keep on going.