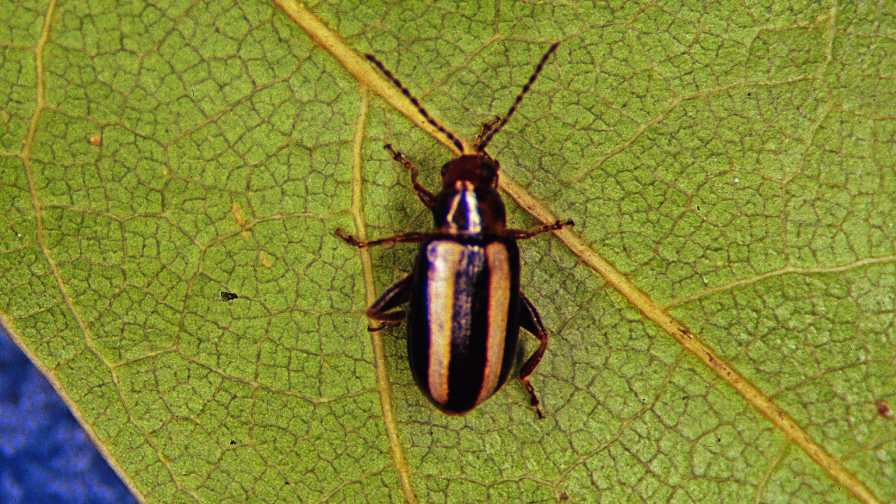 John C. Palumbo, University of Arizona, shares tips on how to spot and treat for this pest.

The adult beetle is highly mobile and disperses readily from field crops and weeds onto emerging vegetable crops. They are most active on warm and sunny days.

Palumbo: Palestriped flea beetle are an annual pest of leafy vegetables and melons. It infests vegetables throughout the desert southwest (Arizona, California, and northern Mexico).

Adult palestriped flea beetles do most of the damage on leafy vegetable and melons crops. Larvae generally do not damage vegetable crops or melons, except for carrots. On carrots, larvae will feed on developing crops, rendering them unmarketable.

Feeding damage to cotyledons and young leaves is the major cause of crop loss. Adults feed on both sides of leaves, creating small scars or irregularly shaped holes. They have chewing mouthparts and are capable of consuming large amounts of leaf tissue in a short period of time. Seedling crops at the cotyledon stage are most susceptible, and palestriped beetles can devour entire cotyledons or outright kill small seedlings.

If left unprotected, transplants and larger seedling plants can sustain significant feeding damage on the terminal growing points or newly emerged leaves. Not only can this feeding stunt plant growth, but it also can result in lack of stand uniformity and crop maturity at harvest in head lettuce, romaine, and cole crops.

Palumbo: Palestriped flea beetles have a pair of pale-yellow stripes along the back, one on each elytron. And it can be confused with the stripped cucumber beetle (Acalymma vittatum). Palestriped flea beetles are about half the size of cucumber beetles. But both beetle species cause similar damage to seedlings plants. Feeding damage on cotyledons and young leaves of lettuce and spinach also can be mistaken for feeding by beet armyworm (Spodoptera exigua).