Catch crops: which mix is ​​right for my crop rotation?

Breeding technique has no influence on soil life

Late blight and alternaria: this is how the spray start succeeds

How to Avoid Harvest Damage to Potatoes

Potato nematicide can now be applied with boom sprayer

Hard polishing before cutting for crisps with Wyma Vege-Polisher™ system 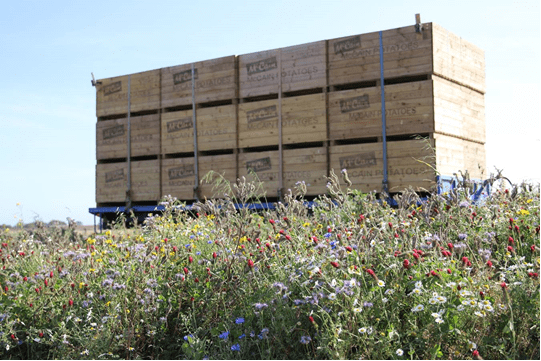 If rapeseed follows, cruciferous vegetables are not allowed in the cover crop mix. But what should come before grain or as a mixture for feeding? Here are our eight tips.

Catch crops fulfill a variety of tasks in the soil, for the subsequent crop or as a feed reserve in the dry season . But which cover crop mix suits my crop rotation ? The Service Center for Rural Areas (DLR) in the Eifel gives eight cultivation tips.

In any case, rapid youth development is decisive: it determines the strength of the weed suppression.

Avoid catch crops in oilseed rape crop rotations, on which diseases such as Verticillium, Sclerotinia or Carinthia can multiply. These include cruciferous vegetables in particular. arms that grow maize and rape should regularly check their cover crop. Often large amounts of volunteer rape emerge in the catch crops and grow unchecked there.

There is considerable potential here for the propagation of clubheads. Avoiding cruciferous vegetables in the cover crop mixture does not help much in such cases. In this case, it would be better not to grow catch crops, at least for grenning. Rauhafer (sand oat) and Phacelia are neutral with regard to the rapeseed. Phacelia can, however, get Verticillium and – depending on the duration of vegetation – also Sclerotinia. Ramtill herb should be rated negatively because it promotes sclerotinia. Buckwheat, grasses, flax and legumes such as alexandrine clover are good choices .

Maize does not make any phytosanitary claims that speak against or for cover crop cultivation. You just have to fit for the crop rotation. However, pay attention to the variety-specific properties. When it comes to yellow mustard, the flowering properties must be taken into account: If the goal is to have the longest possible flowering, you should use early varieties. The opposite is true for the highest possible biomass yield, because the greatest biomass growth is over when the blossom is reached.

The restrictions are lowest in pure cereal crop rotations. When choosing, the time of sowing and the benefit should be in the foreground. Avoid rough oats because of their close relationship. If nitrogen is to be bound, legumes can be used as pure seeds or as a mixture. When focusing on loosening the soil, choose deep roots such as oil radish. Pure field forage also offers advantages for crop rotation. If the choice falls on ryegrass or other non-freezing species, more intensive processing or chemical plant protection is usually due in spring.

After the dry years of 2018 and 2019 and the low feed yields this year , the supply situation remains tense in some places . Catch crop cultivation for forage use is interesting again this year. The catch crop must match both the crop rotation and the requirements of the species in terms of forage quality. For high-performance dairy cattle, the highest possible energy concentration with a favorable crude fiber content is important. Fast-growing ryegrasses are particularly suitable here. If necessary, they can be mixed with small-grain legumes such as alexandrine clover or Persian clover.

Because the catch crop is harvested in the sowing year, it counts as a catch crop in the sense of the Fertilizer Ordinance: A fertilizer requirement assessment is mandatory! In this case, the general maximum limit of 30 kg / ha ammonium nitrogen or 60 kg / ha total nitrogen does not apply.

Annual and Welsches ryegrass can be sown in July and by the beginning of September (annual) or October 1st (Welsches) at the latest. The grasses utilize nitrogen optimally and sprout again after use. A good winter green is created. In spring, the annual ryegrass comes back into the lap and ear emergence. This enables combined summer and winter catch crop use, which can be easily integrated into corn crop rotations. The spring harvest compensates for the lower yields in autumn.

1.0 to 1.5 kg / ha of winter rape can be mixed into annual ryegrass mixtures. The problems described for rapeseed crop rotations must be observed here. When mixing in legumes and growing legumes as the main crop in the crop rotation, the cultivation breaks must be observed. In this way, pathogens and pests can be contained that promote so-called legume fatigue.

Oats, field peas and summer vetch mix form an excellent mix of catch crops that complement each other. Oats serve as a support for the climbing field peas and vetch. These suppress weeds. For the advisory area of ​​Rhineland-Palatinate, the DLR published the recommended mixes and varieties for grassland and arable forage from 2020 to 2021 .

7. Green rye as a catch crop

Green rye is sown as a winter catch crop in autumn before the sowing date when grain is used. However, sowing is still possible until late October. The earliest harvest is at Grannenspitzen (BBCH 49) at approx. 20% DM. Last year, an average of 100 dt / ha DM could be harvested at the DLR test site in Kyllburgweiler (Eifelkreis).

Important to know: rye needs a lot of water. When it is drought, it makes heavy demands on the water reserve in the soil and the following main crop cannot emerge as well and show yield losses.

Catch crops for greening are counted with the factor 0.3. In order to be capable of greening, the mix must consist of at least two species from a given list. None may have more than 60% semen. Grasses are not differentiated here! The sowing must take place between July 16th and October 1st. The catch crop must remain until January 15th. A main crop must also follow after the catch crop in the following year. According to the fertilizer ordinance, organic fertilization is still allowed this year.

With material from DLR Eifel www.agrarheute.com

Balanced Crop Nutrition: Fertilizing for Crop and Food Quality
Related Topics:
Up Next