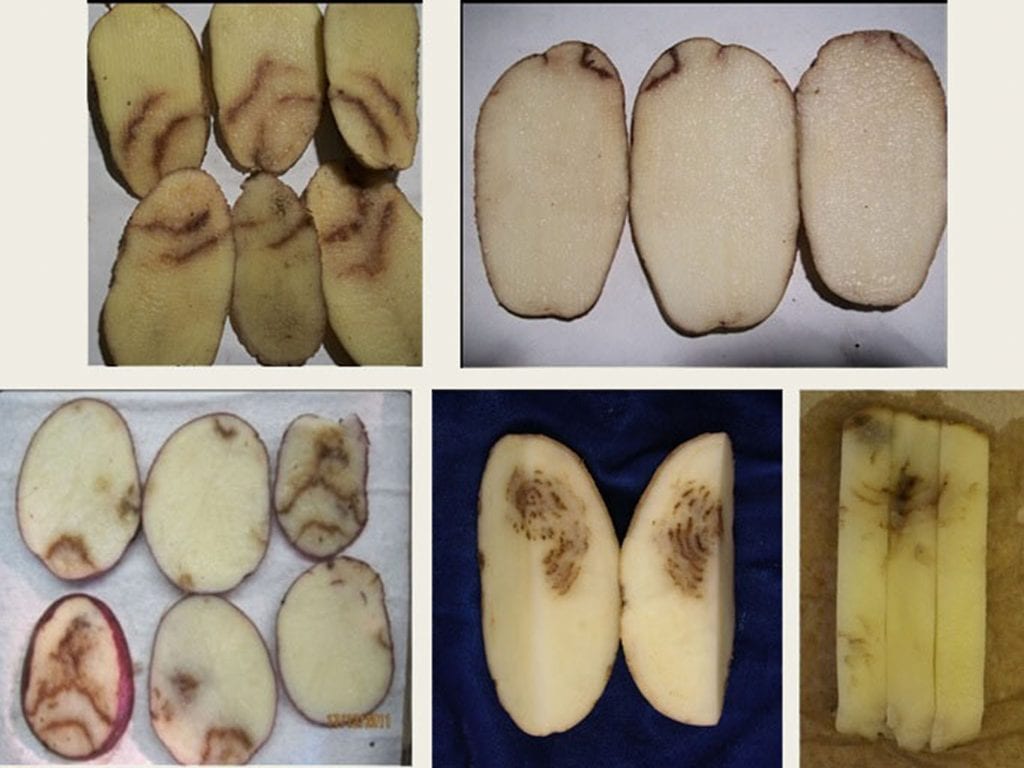 Infected plants do not always show symptoms and symptom development depends on potato cultivar, virus strain and the environment.

Foliar symptoms will only occur when disease develops from infected seed, but not all foliage exhibits symptoms. This situation poses a serious challenge for seed certification which currently relies on foliar symptoms for disease detection and identification. When symptoms do occur, they vary in appearance depending on the variety and environmental conditions. Symptoms may be evident when temperatures are cool but fade as temperature increases. Foliar symptoms include a bright yellow blotch (aucuba) pattern on the lower leaves, a V-shaped yellow (chevron) pattern, deformed leaves, and internode shortening, which is the classic “mop-top” pattern that gives the virus its name.

Symptoms on tubers commonly consist of internal discoloration including rust-brown arcs, rings, or flecks. The symptoms are similar to those caused by tobacco rattle virus (TRV), alfalfa mosaic virus (AMV), and some strains of potato virus Y (PVY). However, tubers infected with PMTV may not exhibit symptoms at all. External PMTV symptoms are infrequent and appear as raised rings on the tuber surface.

Symptoms of powdery scab are confined to the below ground parts of the plant. Symptom expression is dependent on the potato cultivar and on the environment. Powdery scab causes lesions or scabs on the surface of tubers. Infection starts with small purple lesions or pimples which expand, turn brown or olive-brown to dark brown, and produce uniform round, raised pustules. When the pustules rupture they expose a shallow depression filled with brown, powdery spores and damaged tissues. Infected roots and stolons can have gall-like growths which turn brown as they mature. Tuber lesions that are barely noticeable at harvest may continue to expand during storage. Tubers infected with powdery scab are predisposed to other diseases and dehydration during storage. The main loss from powdery scab is decreased marketability rather than reduced yield.