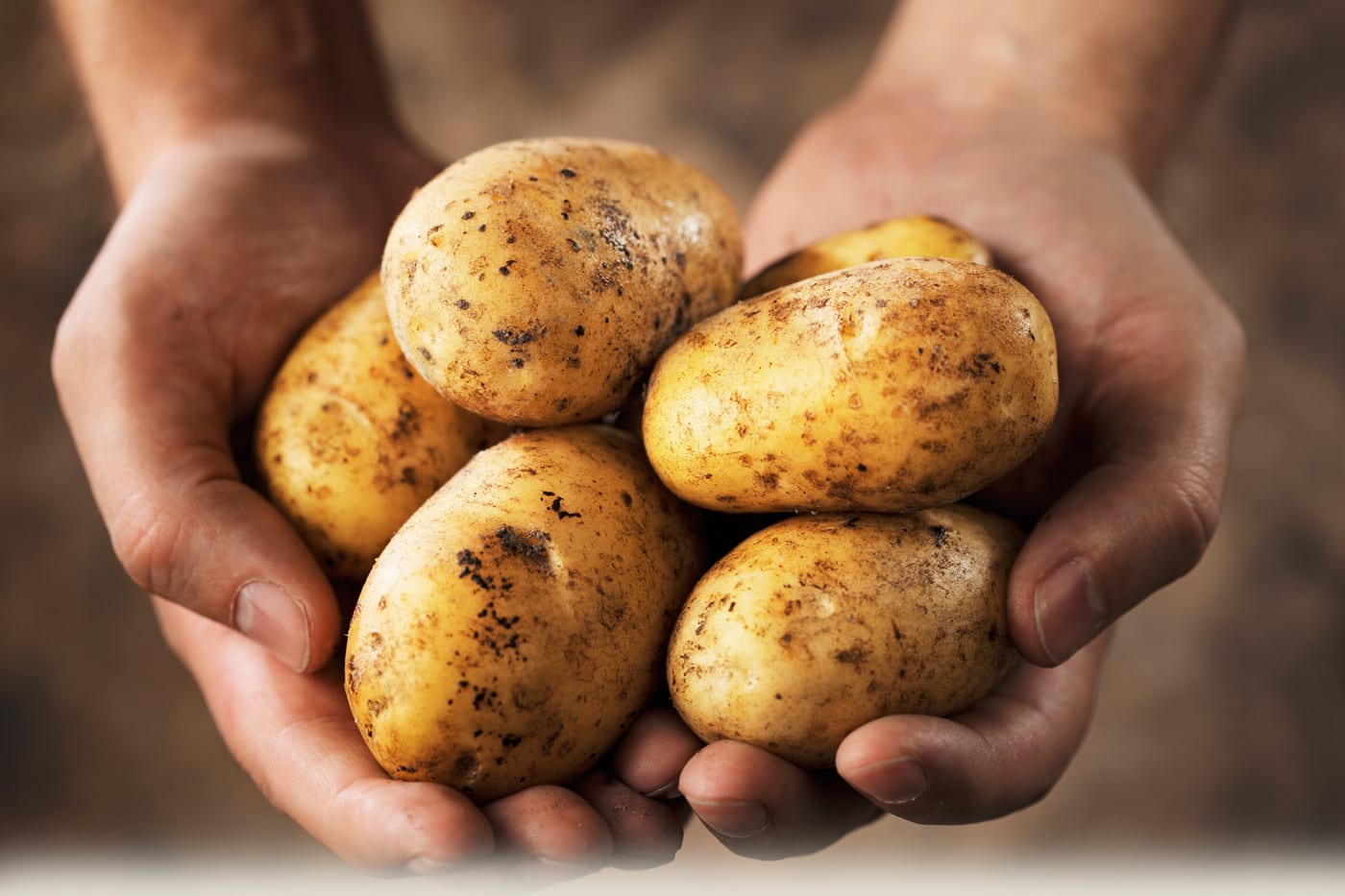 Potatoes can have reduced yield and quality in the growing season when affected by glyphosate. Furthermore, seed potatoes can store glyphosate residues until the following year and when planted they can have emergence problems that ultimately can reduced yield.
Glyphosate is a commonly used herbicide in agriculture because of the low cost for effective control of grasses and broadleaf weeds during the growth of glyphosate-resistant soybean, corn, canola and sugar beets and as a preharvest treatment for several crops, including small grains and canola.
When these treatments occur next to a potato ﬁ eld or the same sprayer tank is used to treat potatoes, the potential of glyphosate coming in contact with potato plants increases. Each year, numerous cases of glyphosate injury in potatoes are reported in North Dakota and Minnesota.
The purpose of this publication is to describe the symptoms of glyphosate injury in potato plants and seed grown with glyphosate residues.

Potatoes can be exposed to glyphosate in a variety of ways, including drift of particles, tank contamination, misapplication, inversions and spot treatments in the ﬁ eld.
The most common ways potatoes come in contact with glyphosate would be through drift of a spray solution or tank contamination. Spray drift can be mitigated in a variety of ways, including adjustments to carrier volume, nozzle selection, spray pressure, boom height and travel speed. In addition, spraying near a potato ﬁ eld should occur only when wind speeds are between 3 and 10 miles per hour and the wind is blowing away from sensitive areas. This may include not spraying ﬁ eld borders next to potato ﬁ elds.
Spray tanks should be cleaned with the proper tank cleaners and rinsed thoroughly before being used in potatoes. Producers may consider having a spray tank that is dedicated solely for potatoes and never is used for spraying glyphosate. Misapplication can occur when a ﬁ eld is sprayed with glyphosate unintentionally, or more likely, when the spray boom is overextended and the spray solution is applied to the outside rows of a neighboring potato ﬁ eld.
Another concern for potato growers would be controlling weeds with glyphosate prior to potato emergence. If potato sprouts are cracking through the soil surface, they may come in contact with spray droplets.
Inversions are caused by vertically stable air and are most common when wind speeds are less than 3 miles per hour and cloud cover is less than 25 percent. In these conditions, drift potential is highest from three to four hours after the high temperature of the day until two to three hours after sunrise. Spray particles are suspended in the air during inversions, just like dust, fog or smoke can be observed in these conditions.
Potatoes also can come into contact with glyphosate when spot treatments occur within the ﬁ eld or around the ﬁ eld edges. Being aware of sprayer setup and environmental conditions can help mitigate off-site movement of herbicides onto sensitive crops, such as potatoes.

When glyphosate comes in contact with potatoes during the growing season, it can cause damage to the leaves and tubers, and reduce yield and marketability of potatoes.
Glyphosate enters the potato plant through the leaves and then translocates to the growing points above and below ground. During daughter tuber development, tubers act as a “sink,” or a place to accumulate assimilates produced by the leaves and other exogenous compounds (such as glyphosate) translocated by the plant.
Glyphosate injury can appear as a yellowing or necrosis in young leaves, and plants can be stunted in growth (Figure 1).

Tuber symptomology may include cracking of the skin, malformed tubers and tissue death followed by secondary pathogens invading the tubers (Figure 2).
As injured tubers progress into the bulking stage, cracks and malformations will amplify. This reduces the marketability of tubers. Such cracking may be mistaken for growth cracks, but analyzing multiple samples and sending tubers to laboratories to test for herbicide residues can assist in conﬁ rming the cause of the injury. When glyphosate is misapplied and high concentrations come in contact with potato plants, foliage and tuber death can occur (Figures 3 and 4). Death of tuber tissue increases the chance of secondary pathogens invading the tuber.

Seed potato ﬁ elds that come in contact with glyphosate will express the symptomology previously mentioned. What is more difﬁ cult to detect is when glyphosate comes in contact with potatoes in the late bulking or early senescence stage because little, if any, symptomology is observed on the leaves or tubers. Tubers may have a normal physical appearance but have glyphosate in the seed that can cause a variety of germination problems the following year.

High level of glyphosate residues in potato seed can:

Moderate levels of glyphosate may cause:

Low amounts of glyphosate in seed potato may cause:

• Weakened plant that has bending, twisting and yellowing of new leaves (Figure 10, Page 6) • Swelling of shoots and reduced or increased rooting (Figure 11, Page 6)

Differences in levels of rooting may be the result of the glyphosate concentration, environment or the potato cultivar. Slow or delayed emergence will reduce growth and development of plants, which can lower tuber size, tuber number and yield. The extent of this effect will depend on the growing conditions, the amount of glyphosate in the potato seed and the amount of time that emergence is delayed.
Once plants from potato seed with glyphosate residues begin normal leaf growth, plants seem to be able to detoxify or metabolize the glyphosate. Thus, glyphosate residues are not known to carryover into granddaughter tubers.

If glyphosate is suspected to have contacted a potato crop during the growing season, examine the ﬁ eld for injury typical of glyphosate as previously described. Document the injury by making a record of all possible information, including injury symptoms observed, making a map of the area where injury occurs and taking high-quality photographs.
If glyphosate residues are suspected in potato seed, carefully examine multiple plants in the ﬁ eld for the previously described symptomology. One of the ﬁ rst things you will notice is that you will not observe any pattern of injury in the ﬁ eld because seed affected by glyphosate is mixed at harvest, in storage and at planting with seed pieces that might not be contaminated with glyphosate. Potato plants affected by glyphosate will express various levels of the symptomologies because seed pieces often have different levels of glyphosate in each tuber.

■ Carefully document all injury symptomologies and take high-quality photographs (being sure to wash soil off tubers and roots). Estimate the number of tubers affected by counting the number of glyphosate-affected plants in a 25-foot row in at least three locations of the ﬁ eld.
■ Aff ected leaves and tubers can be sent to certiﬁ ed laboratories to conﬁ rm glyphosate residues. To increase the likelihood of herbicide detection, select tubers or leaves with the greatest damage shortly after an herbicide injury is observed. Keep in mind that laboratory analysis may take a number of weeks to complete and ﬁ eld symptomology may subside by the time results are received.
■ See the “North Dakota Weed Control Guide” (www.ndsu.edu/weeds) for information on laboratories that test for herbicide residues. For the best results, use a laboratory that can detect glyphosate residues down to 0.01 parts per million (ppm).
■ Promptly contact all parties and insurance companies involved so visits can be made to the ﬁ eld to validate information. Review your state’s law requirements for seeking the right to pursue reimbursement. For more information, see “Documentation for Suspected Herbicide Drift Damage,” NDSU Extension publication W253.

All photos by Andy Robinson

Related Topics:Glyphosate on Potatoes
Up Next

In search of the stress-resistant potato