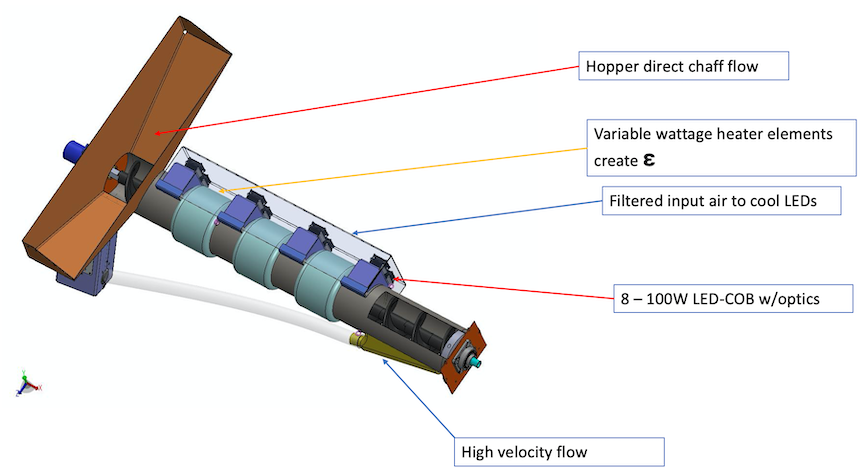 “Blue LED light is going to be a normal tool for weed management and it’s going to happen much faster than farmers realize.”

Let there be light within the bowels of a combine.

Blue LED light is a non-chemical weapon capable of stunting the growth of herbicide-resistant weed seeds, but what if LED light technology could be harnessed to work with a combine to damage weed seed on the go? It already has, according to an inventor raised in the corn and soybean rows of Ohio farmland: The means to kill weed seed with light has arrived.

The Weed Seed Destroyer is a combine bolt-on unit utilizing mild warming and intense LED light rays to saturate weed seed as it passes with the chaff flow during harvest, and the seed-killing device is ready for spring cutting trials in Tennessee wheat and Ohio barley. “Blue LED light is going to become a regular tool for weed control in farming,” says Jon Jackson, the innovator behind the Weed Seed Destroyer. “This type of agriculture technology is developing faster than people know.”

Light-emitting diodes (LED) are capable killers, able to unleash a sanitizing effect against bacteria, fungus, and mold. In 2018, the U.S. Air Force sought technology to make tumbleweed less of a thorn in the flesh and awarded an SBIR (Small Business Investment Research) grant to Jackson’s southwestern Ohio-based company Global Neighbor (GNI), to create a means to make tumbleweed seed nonviable without disturbing desert crust and soil.

Using blue LED light technology, GNI developed a handheld device capable of delivering death to tumbleweed seed. The successful handheld device was featured in an SBIR promotional magazine—where the article was spotted by a curious Iowa farmer, who called Jackson’s office in Xenia, Ohio, and offered a direct challenge: “If you can kill tumbleweed seed in the desert, you should be able to kill waterhemp seed in soybeans.”

Days after the phone call, Global Neighbor staff received a box via post addressed from Iowa, containing a lumpy bag, with “Merry Christmas” boldly scrawled on the outer plastic. Inside the package, straight from Hawkeye State farmland, was a heap of soybean chaff laden with waterhemp seed—the herbicide-resistant scourge of many Midwest growers.

“The bag of chaff and seed was the start,” Jackson says. “We almost immediately began testing in the lab. In the desert, attacking tumbleweed seed was far simpler because it sits on the surface and provides a direct line of sight, but waterhemp is a different weed animal.”

Pared down, Jackson’s team found that warming the weed seed beyond 100+ F and then applying blue LED for several seconds at an intensity 20 times that of sunlight caused mayhem within the cell structures.

“Everyone knows how LED light alters plant growth in row crops or even greenhouses,” Jackson continues, “but we’ve developed something far stronger. Instead, we have a technology with a high intensity, but very short exposure of light in such a way that the seed can’t handle the trauma and will not grow. Nobody has used this type of technology in farming before, and it is highly effective.”

However, delivering the warming and light to weed seed charging through a moving combine is a massive step: Enter the Weed Seed Destroyer.

The Destroyer, a tubed and augered system attached to the rear of a combine, warms and exposes seed to blue LED lights as the chaff tumbles through—all on the fly, according to Jackson. It operates at standard combine speed and requires a modest 10 horsepower to function. “It’s so fast,” Jackson says, “and the warmup and blue light exposure happens in just a few seconds of processing.”

Contingent on manufacturer, the Destroyer attaches with variation to different combines. “For example, on a John Deere S680 (set for June 2022 wheat harvest trials near Savannah, Tenn.) with an integrated spreader and chopper, we take out a single panel before the chopper and add a vein that blows the chaff into the Destroyer, while the straw from the main thrasher goes over the top and back to the chopper as normal,” Jackson details. “It’s a 10” auger and 8’ long that is tucked right in under the chopper system.”

On a New Holland CR940 (set for 2022 June-July barley harvest trials in southwestern Ohio) the chaff spreader and chopper are separate. “We remove the spreader and put the Destroyer in its place. We take the chaff as it comes out and funnel it into the Destroyer, and it is blown back out into the chopper waste stream,” Jackson explains.

And what level of seed kill is achieved by the system in stationary unit testing? “We’re getting really strong results above 98% efficacy on waterhemp and Palmer amaranth from research at Central State University (CSU),” Jackson contends.

Cadence Lowell, chair of the Agricultural Sciences Department at CSU, tested a Destroyer prototype in a laboratory setting, and published her findings in a July 2021 report. Regarding the Destroyer’s performance, the study’s conclusion states: “It significantly decreased the average percent total germination for 4 weed species, morningglory, fox millet, common ragweed and pigweed. For seeds treated with directed energy for 4 sec, average total seed germination was reduced 97-99%.”

According to Lowell, the stationary unit displayed a high level of efficacy. “It killed close to 100% of weed seed—four different types. It seems to be seed-size dependent; maybe the bigger the seed, more exposure is required.”

Lowell has spent a career in weed science and believes blue LED light carries major potential as a weed control source. “At our university, we’re working right now on getting this into the field. For example, we’re going to put LED light technology on automated robots for continuous runs through the field in search of weeds.”

If the means of delivery is perfected, does Lowell believe blue LED light will become a farmer tool for use in row crops? “Yes, I do, and it can be combined with different wavelengths of light to make it highly effective, like a mix with infrared or another heat source. I know Global Neighbor has a formula that is translatable to the field because we’ve done it here in our research.”

In November 2021, she received a Weed Seed Destroyer stationary unit, and is testing the device’s efficacy on weed seed kill in rice and soybean chaff. “We’re also going to examine different temperature ranges to determine what effect that has on weed seed kill rates and how it affects the morphological and physiological characteristics of emerging weeds,” Lazaro notes. “Further, we plan to test various chaff moisture levels and see how that may affect the WSDS.”

Once the baseline research is completed, Lazaro hopes to move into a field trial with a combine unit in place. “I want to understand how blue LED influences weed seeds in an integrated weed management system. The fact that this is a potential option is really intriguing, especially as an additional HWSC tactic that could potentially require less horsepower, less fuel, and less time than other HWSC tactics. If the WSDS works and it is more cost effective, I’m all for it.”

Beyond weed seed kill, blue LED light has additional uses in agriculture such as seed stimulation, Jackson says, and GNI is currently testing other LED prototypes. “Right now, we’re also working on a device to kill cover crops and we may be ready this coming spring for one-row tests in Iowa, Minnesota, and Nebraska. And we just submitted a patent application for a device to use blue light to get seed out of the ground faster. As in, we know you can use blue light to positively augment seed growth by dialing back the levels.”

The power of blue LED light, Jackson insists, is an approaching benefit for farmland: “I’m a farm boy from Ohio and I’ve seen how ag technology has exploded just in my lifetime. We plan on building approximately 25 Weed Seed Destroyer units in 2022, 150 in 2023, and continue upward. Blue light is going to be a normal tool for weed management and it’s going to happen much faster than farmers realize.”

Farmers throughout southern and eastern Idaho were befuddled by the bizarre symptoms of crop damage that surfaced in their potato...